Eating Local is Looking Up in Quebec 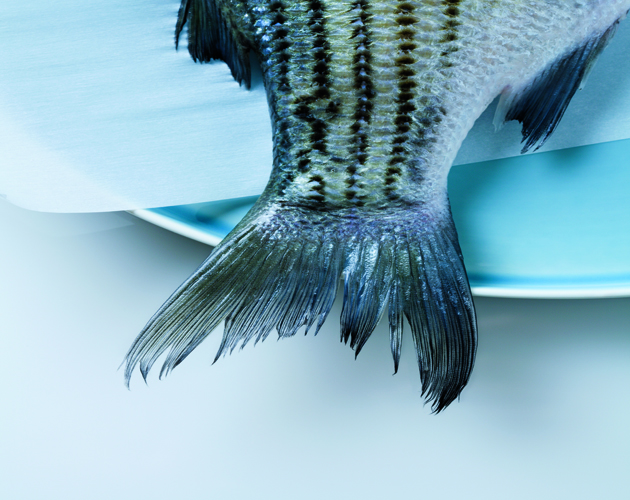 Talk about a good catch. Here, why the waters around Quebec are teaming with striped bass and Bluefin tuna.

While poking around in a walk-in fridge at chef Normand Laprise’s flagship Montreal restaurant Toqué! a few years back, I unexpectedly came face to face with the monstrous, decapitated and mercifully inanimate head of a giant bluefin tuna. Which was startling. And not just for the reasons you might think.

For more than two decades now, Laprise has made his restaurant a showcase and champion for the finest local ingredients that he can coax out of his faithful Quebec suppliers. And his seafood offering typically revolved around Quebec-sourced lobster, razor clams, sea urchin and princess scallops.

So far as I knew at the time, bluefin, which spawn in the Gulf of Mexico, will often venture as far north as Canada but usually get cold fins, call it quits and turn back once they reach the coast of Nova Scotia. So where did Laprise’s fish come from?

Chandler is a small fishing port on the southern coast of the Gaspé on the Baie des Chaleurs, the body of water that forms a wedge between the Gaspé peninsula and the north coast of New Brunswick. And it was out there in those waters that Laprise and one of his chefs landed the bluefin. Which – when faced with a 400-pound harvest which they were disinclined to freeze – they then shared with a few select chef friends in the Montreal restaurant community, like Martin Picard at Au Pied de Cochon and David McMillan of Joe Beef.

“Bluefin tuna from the Gaspé! I’ve been cooking in downtown Montreal for 25 years. Never heard of it until two or three years ago – and now we get it every summer,” McMillan told me recently.

We had got together over a nice bottle at his wine bar, Le Vin Papillon, to catch up on the Montreal dining scene – and our conversation had swiftly turned to Quebec’s evolving wild fishery. My interest had been piqued by tuna and was more pressingly focused on le bar rayé.

In English, you will likely know it as a striped bass or striper. Or maybe the greenhead or squid-hound, as the fish is known in New Jersey. Or even “the rock,” the simple affectionate moniker they give it down in the Carolinas.

Whatever name you give it, the striped bass has firm white flesh that is moist, flaky and delicious. But back home in Toronto, the stripers I find on menus now and then or buy whole at my local fishmonger invariably hail from Chesapeake Bay or waters farther south. I had never seen or heard of any from as far north as Quebec until very recently – with reports of their abundance stretching from the southern Gaspé all the way north to the St. Lawrence River proper.

Next: A look at bluefin tuna

“I have a place in Kamouraska near Rivière Ouelle – and the last few years down at the dock, the stripers are everywhere,” McMillan concurred.

As an angler and an enthusiast of striped bass on the plate, that sounded nearly as good to me as the recently coined phrase Gaspé tuna. Good news all around; for once, it looked like I could have my fish and eat it, too.

But alas, even ostensibly good news about our fisheries does not sit comfortably these days. We are so accustomed to hearing nothing but bad news about fish stocks and the piscine environment that even reports like this of new abundance of desirable species in places where you do not expect them tend to provoke misgivings. Namely, when fish associated with southern waters are venturing farther north than expected, it is hard not to think that global warming and warmer oceans are at the heart of it.

Let’s take the bluefin tuna first. Anecdotal evidence of their new northern reach is sustained by actual catch. No bluefin whatsoever were caught in Quebec waters until 2009 – when nine tonnes were landed, establishing an average catch for the years that followed (the province’s share of the national quota hovers near 50 tags). Newfoundland has also seen its catch spike of late – from one tonne in 2008 to 30 the year following, a level which it has roughly sustained ever since.

“There has been temperature change – marked in general by a gradual increase,” confirmed Fisheries and Oceans Canada research scientist Gary Melvin, a bluefin tuna specialist. “That’s been accompanied by a gradual move northward as well as eastward – so that we’re seeing bluefin in the Baie des Chaleurs and the waters off Newfoundland to the point that we’re concerned by the why, where and how …”

But he added that temperature change is but one of many factors presumed responsible for the change.

Another is a surge in the Gaspésien population of the preferred tuna buffet of shiny, wriggling live herring and mackerel. The third and most compelling factor is burgeoning evidence of a more widespread reviving Atlantic bluefin population.

Yet his hope remains that the population growth reflected in the new local catch is, in fact, eastern in origin. And his department is in the process of seeking approval for funding a tagging operation to resolve the issue one way or another. Until then, at least be content that whatever their source, the bluefin are enjoying a modest upswing – enough so as to show up where we never saw them before.

The striped bass situation is different and more nuanced still. They are not now showing up in Quebec for the first time; rather, they are returning. For, if you look back far enough – say, to colonial times – you will find that the natural range of the striped bass did originally stretch all the way from the Gulf of Mexico to the St. Lawrence. The bass is only semi-anadromous – they generally spawn upriver, but do not always live at sea. Quebec traditionally hosted two distinct populations, one that spawned and lived in the St. Lawrence and another in the Gulf that spawned largely in the rivers of Nova Scotia.

Next: The striped bass is sensitive to water quality

We fished both commercially and recreationally from the late 19th century through to the 1960s. And we did so rapaciously enough to notice that the vagaries of the annual catch reflected a population that waxed and waned cyclically. And then one that simply waned – to nothing.

If I think of the striper as an American fish, it is likely because the last indigenous striped bass caught in the St. Lawrence estuary was in 1968 – four years before I arrived in Montreal. The reasons for their local extinction were multi-fold, and over-fishing was just the start of it.

The striped bass is so sensitive to water quality that its presence is considered a reliable environmental barometer – and in the ’60s, the section of the St. Lawrence where that striped bass population once lived and spawned was a cesspool of raw effluent and industrial runoff.

The regular dredging of the traverse du nord – the St. Lawrence shipping channel past Île d’Orléans – and the dumping of that sediment at Île Madame served as the coup de grâce to the bar rayé’s already diminished spawning grounds. Innumerable environmental measures have since improved water quality in the river system. The biggest flaw is effluent from Montreal’s revoltingly antiquated waste system – which is treated but not disinfected and measurably affects water quality for some 125 kilometres downstream.

Fortunately, the old stomping ground of the striped bass is some 300 kilometres away – from Saint-Pierre-les-Becquets to Rivière Ouelle. And this is where the Quebec Ministry of Natural Resources began reintroducing the species 24 years after their disappearance. The stocking continued through 2010 and, while the population is still deemed too tenuous to fish, anecdotal evidence suggests that the fish are thriving.

Meanwhile, sometime in 2009, previously scarce stripers in the southern Gaspé started showing up in numbers never previously observed – and their quantity has increased every year since. Tagging and tracking the fish with emitters has proven that population to be entirely independent of their St. Lawrence brethren – and, instead, to be made up of fish that spawn in the Miramichi River that previously passed through those waters on their way back out to sea, but now instead linger. The number of breeding fish in those waters has jumped from around 20,000 a decade ago to an estimated 138,000 today. So in 2014, Quebec had its recreational striped bass fishing season back for the first time in 36 years.

Next: Another reason why eating local is looking up

If you’re an angler like me, you likely fancy the idea of a chance to play a striper on a line. And if you’re hungry like me, you probably even prefer the notion of eating it afterwards – its crisp-skinned fillet adorned with a little beurre noisette and sided with a sauté of seasonal summer vegetables as the ultimate centrepiece of an al fresco weekend lunch. Either way – or both – you’ll take this news from Quebec as reason to celebrate.

Alas, not so if you are the Atlantic Salmon Federation, terrified that this burgeoning and legendarily voracious striped bass population is feasting on the young par and smolt of the already beleaguered Atlantic salmon population of the Miramichi. And neither if you are a Quebec lobster fisherman – like O’Neil Cloutier, president of the Southern Gaspé Professional Fishers Group – who for the last two years has been holding press conferences built around the drama of cutting open striped to reveal baby lobster in their bellies.

But Michel Legault, a biologist at in the aquatic department of the Quebec Ministry of Forestry, Fauna and Parks, assured me that this was bunk. “In 2014, in conjunction with the federal Ministry of Fisheries and Oceans, we undertook a study on the diet of the Gaspé striped bass. And we found no evidence of either salmon or lobster in the stomachs of the fish. By the time the striped bass arrive in the southern Gaspé, the majority of young salmon have left for feeding grounds in the open ocean. Their predation on young lobsters is negligible.”

So there you have it: for a nice change of pace, some good news about the state of our fisheries. And yet another reason why eating local is looking up in Quebec – in unexpected and pleasantly surprising ways.