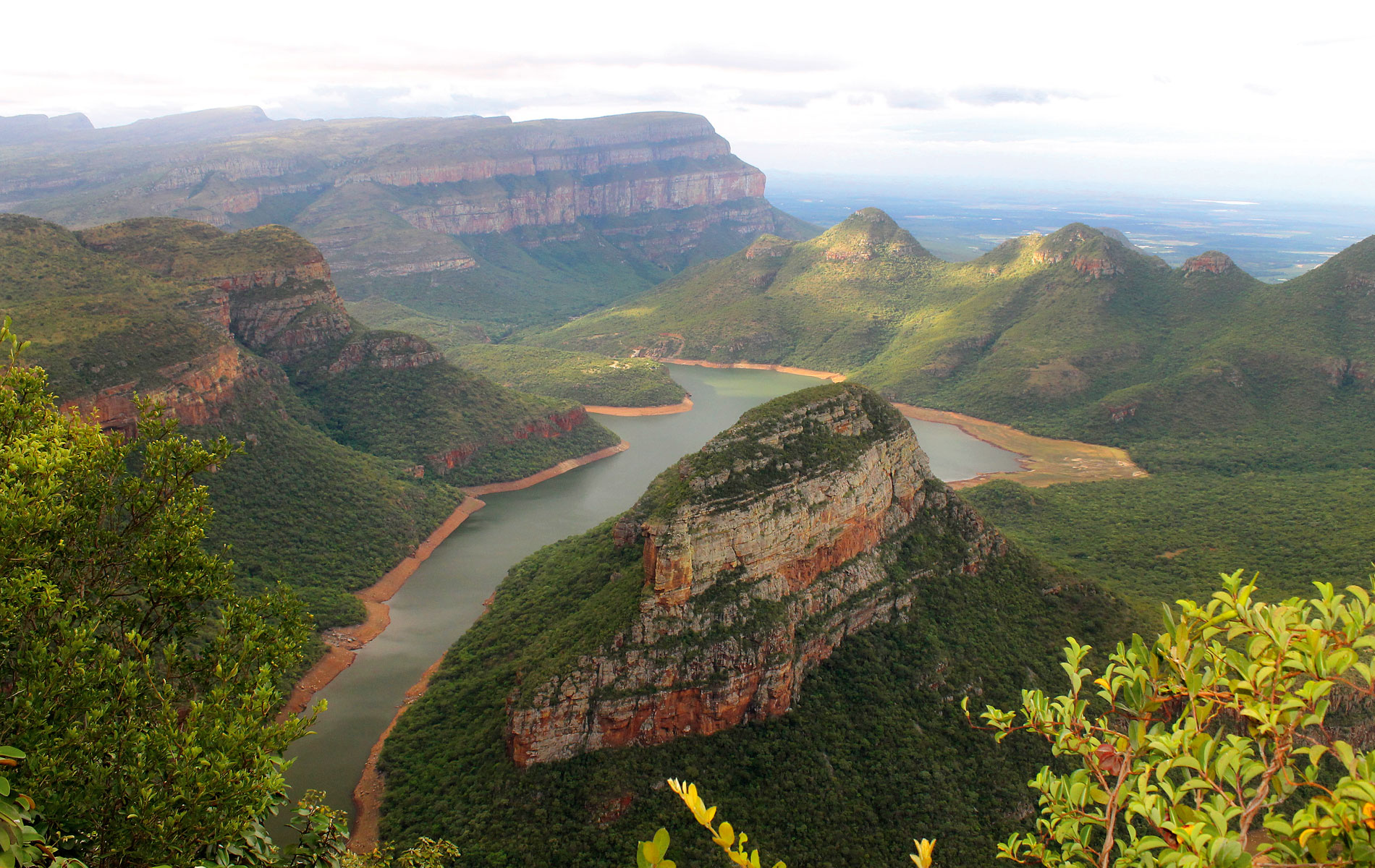 Come along on an ultimate African Adventure, through Greater Kruger, South Africa.

There are many breathtaking moments on our journey through Kruger National Park and Karongwe Private Reserve in Limpopo, during which we take safari game drives with guides that are also conservationists, protectors of wildlife while providing us with a glimpse into their world: savage, unscripted, fragile, beautiful.

But in the savage world, one must go deeper. And within the protected borders of the Greater Kruger area, we do.

With our guides Solomon and Thomas, we are on a quest to spot the Big Five: lion, African elephant, rhinoceros, African or Cape buffalo and leopard. The Big Five is a phrase left over from those Great White Hunter days, when it was a bucket list of sorts for big game hunters after the most dangerous of animals to stalk while on safari for purposes other than to observe. Of course, hunting is now frowned upon, and spotting, not shooting, is absolutely the order of the day in 2016.

It is carnivores that are the main attraction why we are here. My travel companions and I are experiencing the National Geographic Journeys with G Adventures collaboration, launched by Bruce Poon Tip, the Canadian founder of the Toronto-based small-group adventure travel company G Adventures, to tap into educating his guests on Nat Geo’s wildlife conservation efforts, as well as enlightening them to his brand of sustainable travel.

“We strongly believe that tourism can be a force for good, the greatest form of wealth distribution the world has ever seen,” says Poon Tip who, as a world-renowned leader in social entrepreneurship, was one of the speakers at 2016’s ideacity (a ZoomerMedia property).”Tourism is one of the largest industries on earth.”

His claim is backed by recent figures from the World Travel and Tourism Council: worth US$7.6 trillion, tourism represents 10 per cent of the global GDP and employs 277 million people (one in 11 jobs).

Poon Tip is also an author, with last year’s Do Big Small Things topping the Canadian bestseller lists. The book, a combination colouring book, travel journal, scrapbook and inspirational tome, is dedicated to “those who want to explore this life,” he says. “Getting to know how other people live, understanding cultures that are so different than our own, is the fastest path to peace,” he adds. “When done correctly, [travel] can create employment opportunities and breakdown the barriers of inequality and poverty.”

And one way to do it correctly, for Poon Tip, is to partner with like-minded companies. National Geographic‘s Big Cats Initiative supports the scientists and conservationists at the Endangered Wildlife Trust’s Carnivore Conservation Programme, and aligns with the company’s animal welfare platform, which prompted this Explore Kruger National Park tour itinerary.

“At G Adventures,” he says, “we recognize the importance of animal welfare to the tourism industry, and we believe it is an essential part of our commitment to responsible tourism.”

Before we get to the world famous conservation area, there are a few stops. At an elevation of 700 metres the viewpoint over Blyde River Canyon is a must-stop along the Panorama Route, on the road from Johannesburg to Kruger National Park. En route, you’ll spy the three rondevels, above.

Blyde, at a much lower elevation, reveals itself one rocky crag at a time, with the babbling of water from its namesake river reaching our ears before we lay eyes on it. “Blyde,” explains our G Adventures local guide Johan Noppe, “means joy in Afrikaans.” And in Africa, the rushing of the life-giving stream is a joyous sound. The formations are multi-hued ochre, red, brick, gold—a series of browns and pinks wrapped around the river that has hand-carved the curves and bends of the canyon over thousands of years. Think the Grand Canyon in the United States or Tibet’s Tsangpo Canyon.

We reach Bourke’s Luck Potholes, another stop in the canyon, named for a gold rush prospector who struck it rich here. There’s a bridge, and I climb up to it to catch the light and the view below. As my eyes adjust, a sight comes into focus. A skull-like spectre appears in the rocks, hollow sockets and crooked grin staring back up at me, while the water rushes, continually shaping it. It’s here that the Treur River meets the Blyde, in the shadow of Devil’s Window, a mountain that’s part of the canyon range. Again, Johan interprets. “Treur, in Afrikaans, means sorrow,” he says.

A full-grown cheetah. He’s less than 12 metres away, indulging in his kill, his dinner.

And the lioness queen here is in heat. We find her, along with her husband, in postcoital bliss. She languorously licks a paw; he stretches to his full reach, then gently lays his back paws over hers.

Game drives are both a sunset and sunrise affair. Solomon drives the open air jeep—built like stadium seating with three staggered rows of three, it allows everyone, even petite me in the middle seat, an off-the-ground view of the animal kingdom. Thomas sits up front, in the jumper seat, an expert on animal behaviour in the wild and a spotter with a keen eye for movement in the bush.

The lion and the cheetah are only two of the seven big cats—others include tigers, leopards and jaguars. Back at the lodge at Chisomo Safari Camp (above and the pool, below), we treated to an informative lecture on the program, its successes—including more than 80 projects that protect the cats—and its challenges, such as lobbying airlines to end the transporting of wild animals intended for trafficking.

But the spectacular sunset is calling, and Solomon can’t resist driving us to his favourite lookout, a level plain with no trees, offering a vantage point and safe haven. The still blue sky is streaked with orange and gold and pink and purple. Time for a sundowner. We may be in the bush but we’re certainly not roughing it. We raise a glass to the sky, drink in the moment and then clamber back into the jeep as the sun kisses the horizon.

En route, we spot a rhino at the watering hole. It is not drinking but it is making gestures with its head, as if pointing at the water. There’s something funny about the shape of her silhouette. Suddenly, one shape morphs into two. A baby, peeking out from behind his mother’s legs, its ears flicking at the sounds of the cameras. They move together to the water, take a drink and bathe in the waning sunlight.

There’s movement in the bush. Big movement. Branches crunch, leaves shiver, trees sway, parting for a large elephant. Then another and another and more come, crossing in front of us as if we are just part of the furniture. It’s a family, following the herd’s matriarch home for the night. Two youngsters come along and decide to put on a show, dancing and play-fighting 10 metres from the jeep. A bull elephant emerges, next to the jeep, all trunk, tusks and head. Solomon chooses to give him the right of way. And in that moment of respect, we can take in the elephant, wrinkles, whiskers, wary gaze, in all his tusk-to-toe glory. I want to reach out and touch him but resist the urge.

Over the course of four days, we have seen zebras, giraffes, wildebeest, kudu and hyena among countless birds and other animals. But with the leopard, we have spotted them all, the Big Five.

If you go Explore Kruger National Park Tour, 1-855-667-9504 or go to www.gadventures.com/travel-styles/national-geographic-journeys.

By travelling on a National Geographic Journeys with G Adventures tour, guests help fund G Adventures’ community development initiatives worldwide in addition to supporting National Geographic Society’s non-profit work in conservation, research, and exploration. A seven-day tour similar to the one here, including accommodations and most meals, starts at $2,199 per person, not including flight.

Editors’ Tip If South Africa is on your bucket list, now is the time, as the South African rand is extremely affordable against the Canadian dollar. And Air Canada connects via London or Frankfurt to Johannesburg with South African Airways, a member of the Star Alliance network, so if you’re an Aeroplan frequent flier, you can accumulate points toward another bucket list trip in the future. www.aircanada.com; www.flysaa.com.