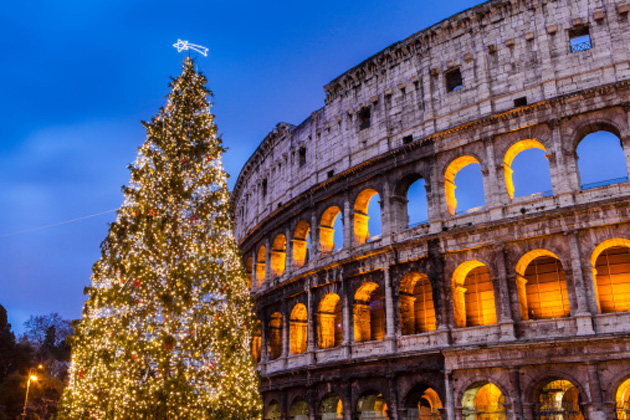 Here, festive destinations and Christmas celebrations in some of the world’s capital cities.

Is the North American Christmas getting too commercial for your liking? Try Greece where the solemn holiday still focuses on religious celebrations and spending time with loved ones. Some areas still observe a period of fasting leading up to the holiday celebrations, and it’s customary to go door to door singing kalandas (traditional carols) on Christmas Eve.

Christmas Day is a full day celebration which includes as many loved ones as possible. Greeks typically share the major meal with their family in the early afternoon. However, when the feast is over families split up and head out for an evening of coffee, drinks and a late dinner with their friends. Staying in for the evening is unusual, especially for young people.

In Athens, the city gets decked out for the holidays with celebrations and displays lasting from the Feast of Saint Nicholas (December 6) to Epiphany on January 6. This year’s events focus on lights and culture, and include holiday displays in renowned Syntagma Square and music as well as dancing events throughout the city. (See the City of Athens website for details).

But be sure to mind your saints: Saint Basil, not Saint Nicholas, fills the role of “Father Christmas” in the Orthodox Church. That means you’ll have to wait until New Year’s — the day when the church honours the saint — to open your presents.

How is Natale celebrated in the seat of the Catholic Church? Here the holidays are packed full of tradition and culture, but the sites aren’t packed with tourists. Many travel guides say the holidays are the best time to visit Rome (if you don’t mind the cold, that is).

The holiday seasons starts with the Feast of the Immaculate Conception on December 8, and that’s when decorations and trees start popping up across the country. You’ll find nativity scenes (presepi) just about everywhere you go, and there’s some healthy competition to see who has the best. The main celebrations take place in the twelve days from Christmas Eve to Epiphany.

In Rome, the essential place to shop for some seasonal goodies is the Christmas Market in Piazza Navona. Keep your eyes open for zampognari and pifferai, bagpipe and flute players in traditional costumes playing outside churches and public buildings. Christmas is definitely a delight for foodies: watch for seasonal foods like eel, cakes, sweets and sweet breads.

Christmas time also affords a unique opportunity to see the Vatican City in action. Religious services in Rome and the Vatican City get attention worldwide, so why not experience them first hand during the Midnight Mass or Christmas Day mass?

And here’s further proof that women do most of the work at Christmas: while Babo Natale (Father Christmas) and the custom of exchanging presents at Christmas is catching on, traditionally it’s La Befana who doles out the gifts. Legend has it that this benevolent witch refused to accompany the Wise Men on to visit the newborn Jesus. She later repented, and set off in search of the child. However, she lost her way and never found the child so she flies around on her broom on the night before Epiphany and leaves gifts for children who have been good all year — or coal for those who haven’t.

Want to celebrate Christmas twice? It’s possible if you head to Russia in January. While we’re celebrating on December 25, people in Russia are still observing the six-week fast leading up to the Russian Orthodox Christmas on January 7 — and they have to wait to have their parties, gatherings and feasts.

A lot has changed over the past couple of decades since the end of Soviet Rule and Christmas continues its comeback. Traditions which were suppressed or adapted are now on the rise. For example, Saint Nicholas has returned to his role of bringing gifts at Christmas rather than Grandfather Frost at New Year’s, and Christmas trees (instead of New Year’s trees) now adorn homes. Babouschka, the Russian version of La Befana, has also returned as the traditional bringer of gifts. Other traditions include going door to door singing koldyaki (traditional pastoral carols).

In Moscow, the celebrations get underway following a televised speech from the president on Christmas Eve (January 6). Families gather for a Christmas Eve meal — but this one has no meat (and certainly no turkey). Instead, the main dish is kutya, a porridge made of berries, wheat and other grains, honey and poppy seeds. The ingredients are thought to bring happiness, success, hope and immortality. After dinner, gifts are opened before people attend a midnight mass. If you’re looking for somewhere to go, try Christ the Saviour Cathedral (near the Kremlin) where one of the main services is held.

Christmas in the summer? That’s what you’ll find in Brazil, along with a mix of local and imported traditions — many of which are a nod to the country’s Portuguese heritage. Instead of the typical Christmas tree as we know it, you’ll find flowers fresh from the garden adorning homes. Instead of familiar evergreens, large trees made up of lights or ornaments decorate public places. Nativity scenes or Presépio are a common sight in stores, homes and churches throughout the month of December.

On Christmas Eve, many people attend mass in the afternoon or evening, or the Missa do Galo (Midnight Mass). Others gather for a midnight meal, the Ceia de Natal, the equivalent of our Christmas dinner. The feast may include ham, coloured rice and fruit and vegetable dishes. Papai Noel arrives that night to bring gifts to children, but he comes from Greenland and dons silk clothing when he heads south because of the heat.

In the morning, some people attend mass while others opt for the afternoon mass instead so they can sleep in — or head to the beach. Many people choose to have their large meal on this day, but if a feast was eaten the night before, Brazilians have a smaller meal instead.

In the evening, it’s time to head out for the fireworks display — and remember to wish people a Boas Festas!

While it’s not a capital city, it’s the traditional birthplace of Jesus and this year the town is expecting a record number of travellers. Thanks to a recent revival of the tourism industry the town is expecting 30,000 visitors — nearly the size of its population — on Christmas Eve alone. Another 22,000 are expected for Orthodox Christmas, according to recent reports.

In Bethlehem, many of the celebrations are similar to those in Europe and North America, complete with Christmas lights, markets and plays. There isn’t “one” thing for travellers to see or experience over the holidays. With all the different church denominations holding processionals and services, the town is a hub of activity well into January.

Thousands of people will visit a few key places as part of the pilgrimage and celebrations. The Church of the Nativity is one of the main holy sites and is located at the place of Christ’s birth. There’s even a star marking the exact birthplace, and a place to pray at the site of the manger. Also, many Protestants will make the trip a couple of kilometres out of town to the Shepherd’s Fields in Beit Sahour where it’s believed the angel appeared to the shepherds in the Christmas story. Catholic services are also held at St. Catherine’s Church and the Tomb of Rachel.

If you’re planning on a pilgrimage, you’ll have to plan well in advance as there’s no room at the inn this year with hotels usually booked solid until February.

Of course, even people in the same place celebrate the holiday a little differently, and traditions can vary from family to family. If you have the opportunity, take advantage of the diversity at your destination.

– In Ireland, mince pies and a bottle of Guinness are Santa’s favourite snack.

– In Ethiopia, gift-giving is a very small part of the Christmas celebrations. Children often receive clothes.

– Wooden shoes, not stockings, are left out to be filled with gifts in many European countries including France and Spain.

– Armenians in the Holy Land celebrate Christmas the latest in the season on January 18. (The feast days are calculated differently than in Armenia, which celebrates on January 6.)

– Celebrations often take to the streets in Southern hemisphere where it’s summertime in December. Parties, dances and fireworks are common.

– In Greece, the elves aren’t so friendly. In folk stories, the Kallikantzari play tricks on people during the Twelve Days of Christmas — often hiding to kick at passersby with their iron boots or hooves.

– Many traditions are in flux and change throughout the years. There’s a wealth of ideas, foods, stories and music out there to enjoy.

And if you can’t exchange gifts with friends and family on Christmas, don’t feel bad. There’s precedent for waiting. In many countries, it’s customary to wait until Epiphany when the Wise Men brought their gifts to Jesus.