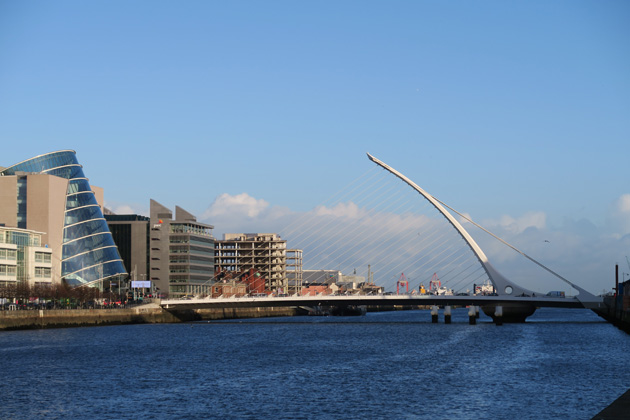 The Samuel Beckett Bridge, in the shape of an iconic Irish harp, over the River Liffey, in Dublin

With St. Patrick’s Day just around the corner, we celebrate the Republic of Ireland’s capital city.

Dublin is a wonderfully walkable place, filled with gorgeous and historic architecture, lush green spaces and a citizenry that knows how to celebrate life.

Speaking of green spaces, The Shelbourne Hotel sits directly across from St. Stephen’s Green, what’s said to be one of the largest public parks in all of Europe. Victorian in its design, it sits on 22 acres, and makes for a great stroll if you’re staying (and you should) at The Shelbourne. The hotel is full of history, and the likes of James Cagney and Peter O’Toole have danced and had a few drinks in the building.

The River Liffey runs through Dublin, and its banked are lined with neighbourhoods such as Temple Bar, with its colourful buildings, classic pubs and The Clarence, the hotel owned by U2’s Bono and the Edge. Beautifully wrought bridges, from the modern harp shaped Samuel Beckett bridge, to the whimsically romantic Ha’Penny, arc over the water, and connect its banks by foot. Curved pedestrian malls, such as the shopping mecca of Grafton Street, feature the best of Irish (home of Brown Thomas Department store) and international High Street style (Benetton, Cos and Marks & Spencer all have shops on or within a stone’s throw of the street), and you can find buskers and street musicians playing and entertaining the throngs. Rumour has it even Bono and Bruce Springsteen have made impromptu appearances here.

Dublin is also the home many famous writers: James Joyce, Oscar Wilde and Samuel Beckett were all born here. For more modernists, the likes of Maeve Binchy and Roddy Doyle count Dublin as their hometown.

Politics, too, have their place here, as the turbulent times of Ireland and its independence from Britain have much of their deep roots here. Daniel O’Connell, a political leader who, more than 150 years after his death, is known as The Emancipator and is buried at the city’s massive cemetery, Glasnevin. Michael Collins, another hero of the people, helped lead the negotiations during the Anglo-Irish Treaty in the early part of the last century, has a memorial in Merrion Square. In the splendid green space, you can also find a sculpture of Oscar Wilde, looking ever the dandy, and places just so that he can gaze upon the front door of what was formerly his home, across from the Square. Yet, for all its politics, it is still the city where Queen Elizabeth I chose to found Trinity College, home of the breathtaking Book of Kells and its illuminated texts.

A great way to explore Dublin is to go with an expert. Air Canada Vacations features Dublin on three of its Ireland itineraries: Taste of Ireland, Discover Ireland and Wild Atlantic Way. The experts at Air Canada Vacations can also hook you up with skip the line tickets for a tour of the world famous Guinness Storehouse Brewery, book an Irish Food Trail or Dublin walking tour experience, or even day trip to the outskirts of Dublin for a Game of Thrones location tour of some of the hit TV shows sets and memorable locations.

But don’t go looking for green beer in this town. Pubs are a place for lively conversation, traditional Irish singing and dancing and a convivial welcome. So have a craic (a good time) and say Slainte! That’s cheers, to you and me.

Here, a few insider secrets, and some not so secret, of Dublin. (For info on Air Canada Vacations packages, go here.) Hello prime minister! The Department of the Taoiseach (prime minister in Irish Gaelic) is the equivalent of Canada’s Parliament Buildings. There are more than 100,000 Celtic crosses in the graveyard of Glasnevin. Inside the tomb of Irish revolutionary Daniel O’Connell at Glasnevin. If you touch it, it’s said to bring long life. The Famine memorial, a series of sculptures by the artist Rowan Gillespie, is marked by a large plaque recognizing a donation on behalf of the people of Canada, which took in thousands of Irish immigrants during the devastating famine. One of the many volunteers that mans Sweny’s, an old-world pharmacy that also holds readings of Ulysses, James Joyce’s masterpiece, as it is also featured in the book. Don’t forget to pick up a bar of lemon-scented soap that gave the shop its fame! In Merrion Square, you’ll find a memorial to political activist Michael Collins. Note, he doesn’t look much like Liam Neeson, but we’re okay with that. Looking ever the dandy, Oscar Wilde sits in repose, facing the front door of what was once his home. If you go, take a look at him from all angles. From one side, he appears melancholy, while from the other, he appears happy as he plays with his flower boutonniere. The materials used are stones of the colours: green jade from Northwestern Canada for his jacket, pink thulite for his lapels and blue pearl granite for his trousers, both from Norway. Go shopping on Grafton Street, or have an entertaining time by just watching the buskers and street musicians. The harp is also the symbol of Guinness. Here, the gates to the Storehouse, where you can taste the brew, and learn how to pour the perfect pint! Blue skies over Ha’Penny bridge, over the River Liffey, just down the way from The Clarence, Bono’s hotel. The moon over Trinity College, founded by Queen Elizabeth I. It also houses the must-see Book of Kells and its illuminated texts. Night falls on Dublin Castle, where you can take in traditional concerts and more.