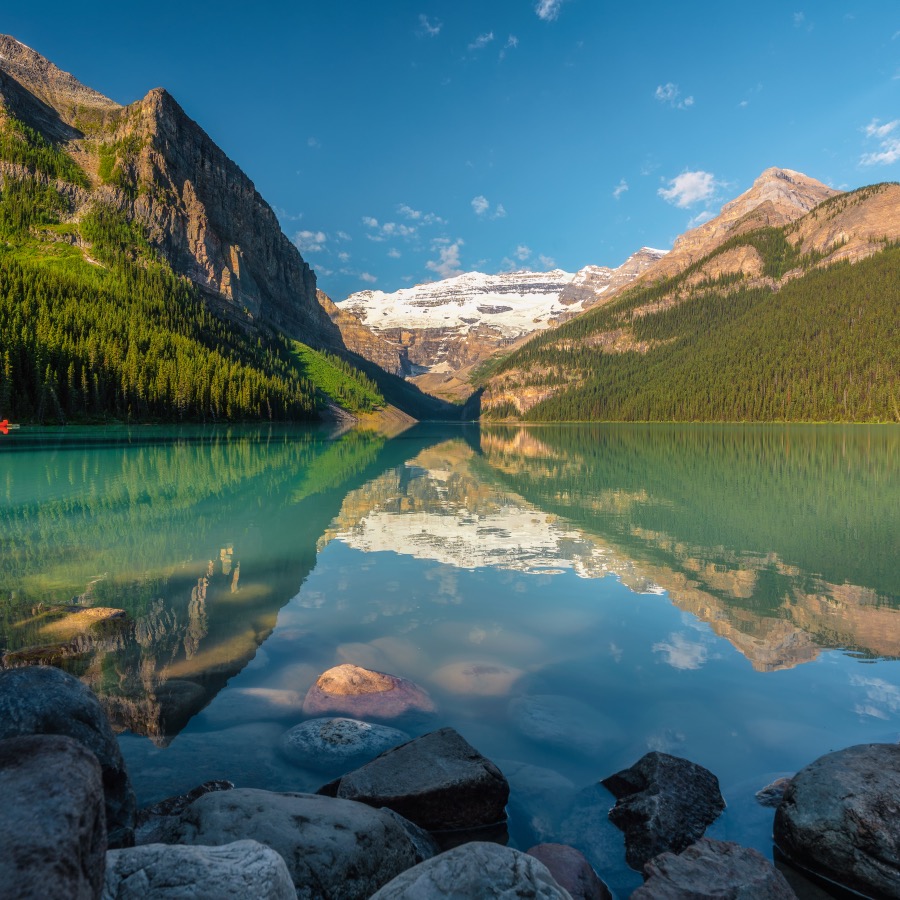 On this day (Sept. 1) in 1905, Alberta and Saskatchewan officially joined Canadian confederation, becoming our nation’s eighth and ninth provinces. So to celebrate the 115th anniversary milestone, we’re revisiting a 2018 story by Zoomer‘s Vivian Vassos, in which she discovers a history both personal and royal as she explores two of Alberta’s most beautiful lakes.

The first time I saw Lake Louise, it was ice. Glass, a mirror of the snow-covered crags that rose up behind it, chevron-like arrowheads that steered the eye to the pale emerald-hued surface at their feet and to the crystal blue sky above. Gliding over it was a lone skater, effortless and inspiring those who watched to lace up and join in. Soon, the quiet was broken with the sounds of blades carving over frozen water, along with the kind of pealing laughter only the joy of being in this postcard of a place could bring. Framed in a way that made it seem otherworldly, at that moment the most beautiful place on earth. And, in many a traveller’s eye, it is.

RELATED: Falling in Love with the Canadian Prairies

The second time I saw, it was summer. The glacier-fed water was set free of that icy grip, shimmering a turquoise green-blue dappled by sun, diamonds sparkling and dancing on its surface, daring me to follow the light and at the same time, look away from the near blinding intensity of it. Louise was still on this day, again like glass, but the crags — these Canadian Rockies, snow-topped even now — shared their vanity with a reflection of canoes, slicing the lake like red and yellow knives over butter.

I had brought my parents here this time, after a bucket-list trip on the Rocky Mountaineer train. They stood awestruck, just like I had the first time I’d seen it, the postcards not doing it justice. The wind was whipping, even though it was July — Canada Day to be exact — so we took shelter in the Fairmont hotel that sits at the lake’s shore.

Through the Chateau Lake Louise’s arched picture windows, the view took on a bit of voyeur’s excitement and no less breathtaking. But neither the walls nor the wind could hold us; we braved the breeze and hiked the path that hugged the lake’s shore.

Its proximity fed us, an energy that encouraged a conversation about Dad’s time playing soccer in Alberta when he first came to Canada from Europe in the early 1950s; how the hotel was tied to our railroad; and how my great-grandfather, my mother’s grandpa, had come here to help lay the tracks. I had no idea. I was discovering family history that had deeper ties to this place than I had imagined.

The third time I saw Lake Louise, I was celebrating a milestone. I could have chosen just about anything to mark it — a safari in Botswana, a getaway to Vegas or a climb to Machu Picchu but no. It was here in Canada that I felt like celebrating. I went farther this time. Past the canoes, past the crags, I hiked up and away from the mint-green water and onto the Lake Agnes trail through ages-old forests to where, at what felt like the half-way point, I was rewarded with another gift: the looking glass calm of Lake Agnes itself.

The lake’s teahouse provided a rest, yet the idea of taking tea on a Rocky Mountain top is not so new-fangled. Afternoon tea was a creation of Queen Victoria. Lake Louise was named after Her Majesty’s fourth daughter, also the wife of Canada’s Governor General from 1878 to 1883.

Lake Agnes, it turns out, was named after one of our own “royals” – the first First Lady of Canada, Lady Agnes Macdonald. Rumour has it that when she first spied it in 1886, Lady Agnes was utterly delighted. Do the ghosts of these ladies still live here, taking tea with pinkie fingers held aloft, sipping slowly while gazing out on the sheer beauty?

One can only hope because I can’t think of a place I’d rather set my eyes on again and again.

This story was originally published in June, 2018.

Here’s How to Travel Safely During COVID-19