A Royal Christmas at Sandringham 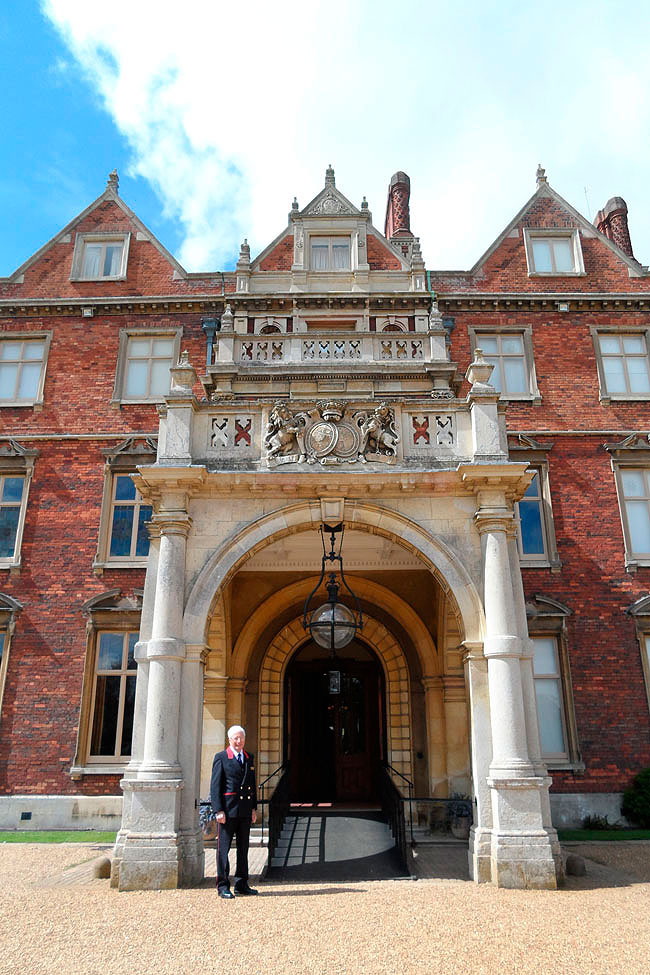 Here, a peek inside Sandringham House, where Queen Elizabeth gathers her kin for Christmas and other family celebrations.

The home, built in 1870 by the Prince and Princess of Wales—the Prince was later crowned King Edward VII—as a private getaway for the royals and their family. It has stayed a private home over four generations of monarchs and, as for family, it is still the place where her Majesty gathers her kin for the yearly Christmas celebrations.

The home itself is open to the public, and many of the ground floor rooms on view are also rooms that the Royal Family use when they are here over the holiday season. Much of the furniture is original to Edwardian times, with a wonderful collection of objet d’art that has been maintained since the days of Queen Alexandra. On the walls, you will find painted family portraits, but it is the candid snapshots placed in frames around the rooms of the current occupants that reveal a family at play and relaxation. Each room that is open to the public is manned by a guide, who can answer questions about the family and the art and objet collections. The home is fully accessible by wheelchair users, making this an all-comers welcome home.

The Duke of Edinburgh is in charge of the care-taking of Sandringham. As part of his management goals, the Duke ensures conservation of the green spaces. He oversees the planting of more than 5,000 trees and miles of hedges each year. The estate also works with local farmers to educate them of better farming practices and more than 200 people are employed by Sandringham estate.

Within the grounds are a tea shop where you can take afternoon tea as a part of your royal tour, and the royal mews (or garage, to you and me), which houses a unique collection of automobiles and other people movers—the Queen mum’s golf cart, for one, and Prince Andrew’s pint-sized, model Aston Martin (yes, the same model driven by James Bond, 007, bullet-proof shield included), which was propelled by two 12-volt batteries! (For more information, see VisitBritain.com.)

We visited the estate in  on an early spring day, where we caught a glimpse of the grounds and splendid gardens. Scroll through for photos! The estate and its expanse of lawns, including these of the North Garden, is where you might see a corgi or two—or more—taking their morning stroll with Her Majesty. Her Majesty arrives at King’s Lynn station—yes, Queen Elizabeth II takes the train from King’s Cross, just like the rest of us—the nearest station to Sandringham, in time for the holidays, 2014. (Photo credit: Getty Images) A sturdy bench along The Woodland Walk’s path allows for a rest stop to smell the roses and take in views of the stately manor. A blaze of colour greets visitors on The Woodland Walk, en route to the North Garden. The James Bond Aston Marton, which was presented to Her Majesty The Queen while visiting the automobile maker’s factory in Buckinghamshire in 1966. It runs on two 12-volt batteries, and was produced for Prince Andrew, and is an almost exact replica of the car 007 drove in Goldfinger and Thunderball. It can reach speeds of 10 mph! Not to be outdone, The Queen Mum had her own set of pimped out wheels. A striped golf cart to match her lawn jockey. And then there’s Her Majesty’s ride, the Rolls Royce Phantom V. The Queen used the Rolls for official events until 2002. The Royal Mews, where the family’s collection of automobiles are housed, as well as the stables and a room for a spot of afternoon tea. Another view of Sandringham House, from The Dell, over the West Lawns.