Well On Your Way: Detoxing in Thailand 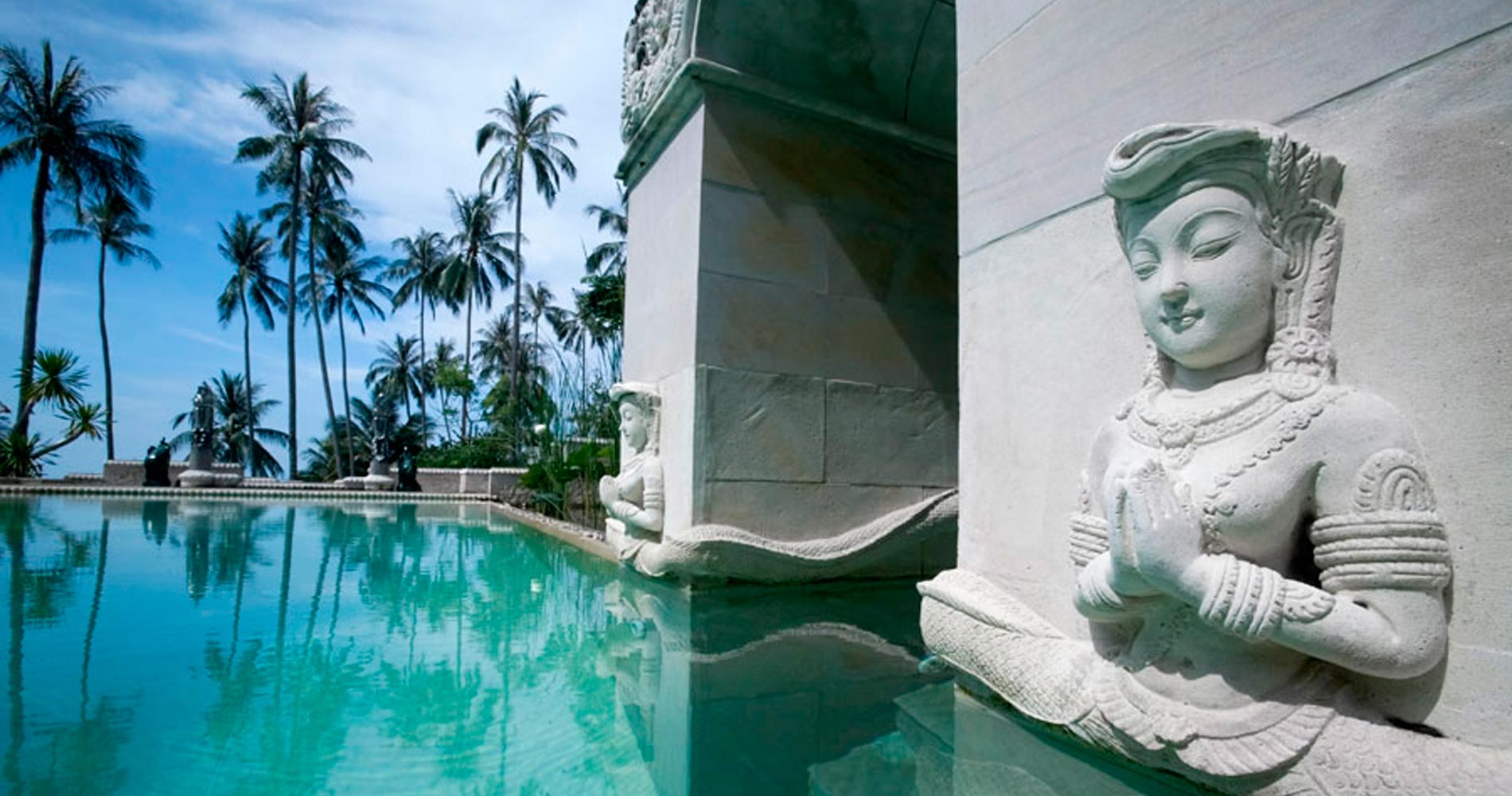 John Stewart’s belief in alternative wellness is grounded in a life-changing personal crisis. A Vancouver native now in his 60s, Stewart founded Kamalaya, Thailand’s Functional Medicine-based retreat, on the coast of Koh Samui in 2005 after his business partner (and wife), a specialist in Functional and Traditional Chinese Medicine, cured him of “fatal” liver disease that left him in a coma with three months to live.

“The digestive system is connected to the brain. There are more nerve endings in your gut communicating with your body than in the entire nervous system,” explains Stewart. “The stomach’s bacteria, four trillion cells collectively known as the microbiome, regulate hormone and neurological function. What we’re learning now will change medical science. It will be reclassified as an organ, as important as the heart or the liver.”

Imbalances in the microbiome have now been linked to almost every illness – physical, emotional, and mental. Last year, researchers at the University of Texas MD Anderson Cancer Centre found that patients who respond to treatment for malignant melanoma have more diverse gut bacteria than non-responders.

A study at Cornell University revealed that the weight of mice could be changed by more than 15 per cent simply by altering their intestinal bacteria. These imbalances now being connected to everything from autism to depression has prompted the University of Michigan, for example, to run clinical trials on how diet alters gut microbiota and, thus, influences bipolar disorder.

“The stomach is considered the second brain in Traditional Chinese Medicine (TCM) and Ayurveda, which have always viewed digestive health as pivotal,” says Karina Stewart, a former Princeton pre-med student who switched to TCM and Functional Medicine before co-founding Kamalaya with her husband. “60 to 80 per cent of our immune system is centred in the gut.

When the intestines become inflamed, there’s a corresponding effect in the nervous system and brain. Depression and mood swings, autoimmune disorders like arthritis, lupus, MS and Parkinson’s. What we eat, drink, breath goes directly into our systems. So, the immune system has to be strong.”

Examining 18 diverse cultures, including traditional ones in Africa that ingest zero refined sugar or processed food, Stanford professors Justin and Erica Sonnenburg found that those furthest removed from a Western diet had the healthiest tummy microbes, including many that were completely missing from the Western stomach.

Co-authors of 2015’s The Good Gut, they define this “mass extinction event” as one caused by poor diet, antibiotics and our First World obsession with over-sterilization. In a July 2017 interview with NPR, Jens Walter, a microbiologist at the University of Alberta, agreed that this explained, “all these diseases that have sky rocketed in the last 50 or 60 years.”

Raised by recycling lefties (oatmeal for breakfast, no processed foods, fresh popcorn over bags of store-bought chips), I’ve always been a generally healthy eater. I’d also viewed diet as a straightforward calories-in/calories-out affair, an indulgence here, rectified by restraint there.

Educated about the microbiome, I have an instant paradigm shift in my thinking about food. A new understanding that whatever I ingest isn’t simply passing through but, in fact, has a lasting effect, good or bad. I swear off factory-farmed meat of any kind. Already disturbed by the inhumane manner in which animals live and die on commercial livestock estates, this is something I’d been leaning toward for a while – equally troubled by the karmic implications of ingesting the cortisol- and adrenal-drenched meat of unhappy animals that are slaughtered in terrifying conditions. All that, on a plate, and now antibiotics deemed a holocaust for stomach bacteria, this is the kick over the finish line. I can still have meat but on occasion and only that which is carefully sourced from organic, free-range farms. Otherwise, I’ll stick to wild fish.

“Thailand has been investing in organic agriculture for over a decade,” says Karina of her adopted country, which actively converted its food production to natural chem-free farming, as official policy, in 2006.

“In the West, antibiotics are in the water, in factory-farmed meat, and they destroy your microbiome.” Diet is critical to the gut-brain axis but, she adds, sleep and stress-reduction are also essential: angst hormones like adrenalin and cortisol afflict gut bacteria. That said, even in the West, maintaining a fresh, organic, antibiotic-free diet is a tactic that’s been enormously simplified given the last decades’ wave of healthy-eating outlets. From weekend farmers markets and Freshii cafés on every corner through the now agreeably discounted Whole Foods (thanks, Amazon!), pure food is not as costly or as tricky to source as it once was.

Curious to see what’s behind Kamalaya’s 50 per cent guest return rate, unheard of in an industry where the average is a fifth that, I check in. A lush compound spread across eight acres of flowering jungle, equipped with a state-of-the-art fitness facility, an array of pools, extensive spa and yoga pavilions, my first day begins with a visit to the naturopath. I itemize my issues for Marissa Brennan, who’s from Toronto of all places.

I’m bloated, retain water, have puffy eyes, and I’m a smoker. I’m flooded with estrogen. Assigned an organic, plant-based detox diet, Brennan advises Omega 3 supplements and instructs me to drink no alcohol (organic wine is available in the restaurant) while flushing myself with mineral-rich Rooibos tea and two litres of water a day. I’m handed a personalized schedule: acupuncture, lymphatic drainage and Chinese stomach massage, purifying sessions in the infrared sauna and steam room, daily yoga and meditation.

By Day 3, standing naked in front of the mirror, the jiggly-wiggly figure and puffy eyes have been banished in an onslaught of water, zero liquor, detoxifying sweats, and lymphatic massage (something I always viewed as a spa con but which actually works). Pounds fall off me – much of it water, now that my body isn’t hoarding what few drops it gets but also thanks to a menu of organic super foods that’s so varied, delicious and artfully presented, I never feel deprived. A week later, I check out, lean and clean. Inspired, I add fermented fluids – miso soup, kombucha tea – to my post-Kamalaya routine to reinforce healthy tummy bacteria.

It’s three months later as I write this. A once dedicated steak and martini girl – one who found clean eaters so fussy and tedious that I wrote a rant about it for this magazine – I’m now nauseated by the thought of ingesting antibiotic-drenched, factory-farmed meat. Having gone organic pescatarean, I’ve also “consciously uncoupled” from my gratuitous daily wine drinking. Never a morning eater, I start the day with fruit and hot lemon water or a shot of apple cider vinegar to get my enzymes going. I no longer have puffy eyes. I’m 12 pounds lighter though no change in exercise, just the usual brisk dog walks. My menstrual cycle has regulated. As have my moods. The dark patches on my face from surplus estrogen are fading. I don’t hit the snooze button three times, trying to drag myself out of bed. I’ve swapped yogurt for kefir, which has a bazillion more probiotics. I pop omega 3s. I down two litres of water every day.