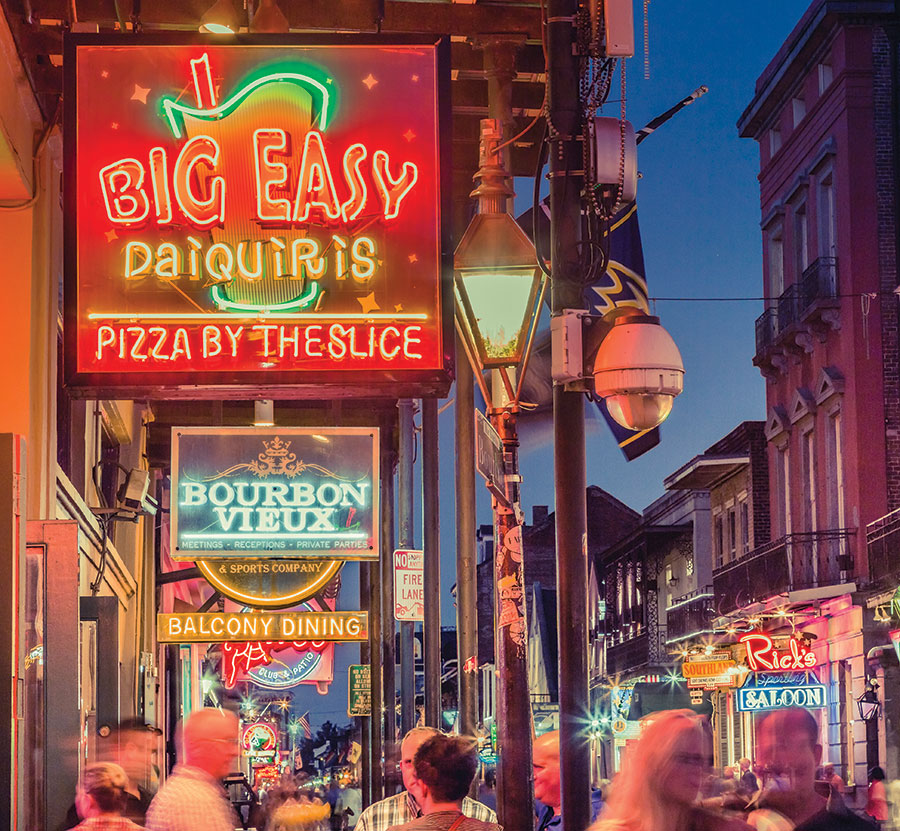 In New Orleans, ghost tours, beignets, second lines and all that jazz bond friends on a milestone birthday celebration.

Sarah is seeking shelter in a sliver of vertical shade offered by a lamppost. I want to laugh, but my tongue is stuck to the roof of my mouth. It is 37 C, and we are more than 50 years old. The math is not encouraging.

Like a mirage in the desert, we see a speck on the horizon of St. Charles Street near our three-bedroom Airbnb bungalow in the Garden District, a lovely neighbourhood of grand antebellum mansions with living rooms made for debutantes and porches big enough for sitting, fanning and rocking. We are waiting for the National Historic Landmark known as the St. Charles streetcar, a charming wooden contraption that jerks and chugs its way downtown to Canal Street in 20 minutes.

As we strain to focus, we see a shirtless man, running in this heat. “Not that I’m complaining,” says Liz. “It’s a free show.” As if by magic, two more materialize, each one literally and figuratively hotter than the one before. “Another perk of the Garden District,” says Sarah gleefully.

You couldn’t ask for a better start to a mid-September girl’s getaway, a belated 50th birthday vacation for my two best buddies and former roommates from university days. The three of us have travelled many roads together in the last 30 years, one of which included 3,869 other people in red-and-white striped T-shirts and toques and round black glasses, part of Dublin’s 2011 entry into the Guinness Book of Records for the largest gathering of people dressed as Waldo. Sarah Withrow and Liz Renzetti, far more accomplished writers than I am, have skipped, staggered and plodded many miles beside me, through the death of my parents, my wedding, the birth of my two children, the end of my marriage and many, many job implosions. We were supposed to take this trip a year ago, so we are pretty excited that it is finally happening, almost as excited as when we discover a Shake Shack at JFK.

We do love to eat, and New Orleans is a town for foodies. We drop our bags and head to the self-described “beautifully deteriorating New Orleans mansion” of Cavan, where I have the first of many Louisiana oysters and drool over an appetizer of boudin tater tots with mustard. The other standout is the sublimely delicious Shaya, a modern Israeli eatery named Best New Restaurant in the United States by the James Beard Awards in 2016, with pita bread delivered to your table straight from the wood-fired oven and the best baba ganoush I have ever had in my life. We take the streetcar downtown three mornings in a row for iced coffee and beignets for breakfast at the landmark Café du Monde, where the doughnuts and floors are smeared in icing sugar and, by the time you leave, so are you. And I eat Voodoo chips, a more piquant version of the all-dressed, for breakfast.

Since one of Liz’s travelling rituals is a ghost tour in every town, we pick our way through almost a dozen buskers playing beats on overturned plastic drums to get to the Voodoo Lounge on North Rampart Street for our French Quarter Phantoms tour.

Guide Malika Freydberg is trying to talk over the sound of a nearby band but stops her commentary in case it is a first line. These walking musical parades, which originated with the African-American tradition of accompanying the dead from church to the burial site, begin with a band and the hosts (which could be a community group, a wedding party and, yes, even a funeral cortege). The second line is made up of the people who follow, and that means anyone who wants to join the dance party.

The source of the music is stationary, so she carries on. “I’ve learned you just got to let New Orleans be New Orleans,” jokes the former schoolteacher, who makes the same money storytelling as she did wrangling kids. I count no fewer than 15 tours on the road at the same time, so it is a lucrative business indeed.

At the Bourbon Orleans Hotel, which used to be a theatre and then a convent with a hospital and an orphanage, she claims “the ratio of dead to alive is 10 to one.” Fun facts: dental grade fangs cost about $200, and there are two kinds of vampires: sanguinarians, who drink blood, and psychics, who “siphon off happiness and creative energy.”

While New Orleans is excellent at feeding both body and demented souls, it also speaks to the senses. This includes an olfactory-lobe assault from the fetid combination of heat and garbage, which makes the city’s soundtrack all the sweeter.

We hear the notes of Oh! Susanna playing on a calliope as we approach the Natchez steamboat for a tour of the mighty Mississippi. It is quaint and carnival-like from afar, but up close it feels like a drill bit biting into your brain as the wheezing whistles have only one volume, and that is loud. A busker outside the cathedral sings heavenly opera as his arms move in parabolas around him. Jazz spills from every bar and restaurant.

The most magical interlude happens on Washington Street north of St. Charles, after Sarah gets wind of a first line in our hood, and we set out to find the roving band of merrymakers. It features two jazz bands and the Goodfellas, who are not mobsters but a community service organization. They are kitted out in tan suits and brown fedoras with elaborate beribboned and bedazzled vestments, not to mention huge sweeping feather fans that look like bird wings in each hand.

We fall into the second line, now about two blocks long, following a young guy who bobs and weaves beside his bike. To stave off heat stroke, we buy Coronas for $2 off the back of a pickup truck, which has an extensive inventory displayed on top of the cab.

We eat and drink the week away, with a little window shopping on Royal and Magazine streets and take a bus tour to the Hurricane Katrina memorial, the 17th Street canal in Lakeview – one of 50 places where the flood walls and levees were breached in the 2005 disaster – Lake Pontchartrain, and City Park. We retreat often to our air-conditioned Airbnb, where we read books and binge watch The Great British Baking Show and Justified.

With the exception of one night where Liz and I spend too much time on the porch with a bottle of bourbon, we are well-behaved. We have hours and hours of time to talk, which is more important than ever, since my friends fill in ever-increasing gaps in my memory. I treasure the freedom to ask these women the deepest, darkest questions: Will my children ever learn to clean a toilet? Do I have signs of early-onset dementia?

On our last night in town, we step off the elevator and into the rooftop bar of the nearby Hotel Pontchartrain, where Tennessee Williams wrote A Streetcar Named Desire. One wall is completely open to the terrace, which turns the night outside in. We order cocktails and turn to the 270-degree view to toast the city and the conclusion of another successful escape from the pressures of life and work and family.

Muted, twinkling and expansive, New Orleans is spread out before us, and we fall into its embrace. The details of this trip may fade, but the strength and charity and hilarity of these two women, who spread so much joy and shoulder my sorrows as if they were their own, stay with me through all the days and nights.

“There is nothing in this town that is not beautiful,” Sarah declares. “Everything is beautiful.”

That goes for you, too, my brilliant friends.