Switzerland: Come for the Scenery, Stay for the Chocolate 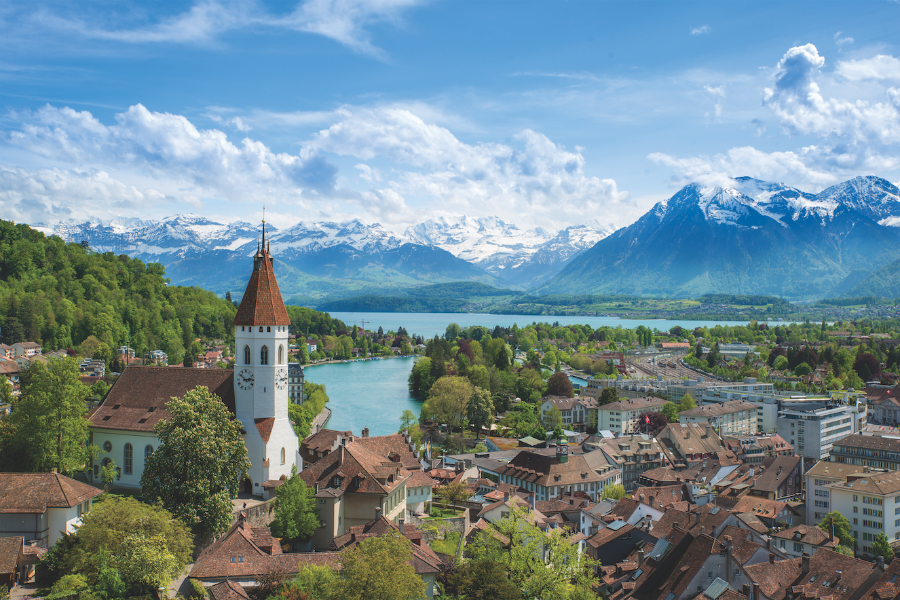 Sweet on Switzerland, Vivian Vassos explores the heart of the Alps, inspired by her family tradition and a love of chocolate.

When I was a kid, one of the things we’d always do as a family was celebrate my parents’ anniversary. It’s in late November and at that time of year, there was always another reason to celebrate: Swiss Chalet’s festive special. Sound corny? Perhaps. But for me, it was all about the chocolate. Back in the day, it was a bar of Toblerone, lined with those funny, triangular-shaped chunks of choco-heaven.

I’d never associated Toblerone with anything else. And we still do have that festive special every year, even though it now has Lindt as the treat. But a funny thing happened on the way to the Chalet this year. I actually made a stop in Switzerland.

Yes, Switzerland is known for the Alps, spotted cows, cheese that’s full of holes, fondue, watches, yodelling and, of course, the chocolate.

It seems it’s mainly because of the white stuff as the cows graze wherever they want, allowing them to feast on the tastiest grasses they can find at an altitude that allows them to produce a thicker, denser milk, known as Alpine milk. The hills are alive with the sound of these happy dairy cows, munching on all that glorious green grass that covers every slope, bells tied round their necks swinging softly, a resounding chime soundtrack.

What is it about a place that’s known to “run like clockwork” that also makes us slide into the decadent? The cheese fondue, for one thing. Oozy and yummy, it’s every man for himself wielding a pierced fork and far from orderly. (Fun fact No. 1: there are more than 450 kinds of Swiss cheese in Switzerland.) And the chocolate. Rich, n’est pas? (Fun fact No. 2: In Switzerland, each person consumes more than 20 pounds of chocolate each year and I aim to join them.)

I start my journey in the Swiss German part of the country. Aboard the speedy train to Interlaken and the Jungfrau region from the Zurich airport, I take in the countryside en route to Grindelwald. No, this is not a rendezvous with Johnny Depp’s character in Fantastic Beasts but the name of a tiny hamlet on the edge of some of the highest peaks in Europe. And it really is all the things you’d imagine as Swiss. Gingerbread houses, set on hilly narrow streets, window boxes full of flowers in bloom, and wooden window shutters painted to contrast the exteriors. I think I’m on a movie set.

But I want to go higher. And why not? I’m in Jungfrau, after all, pretty much the rooftop of Europe. So, the next morning, I board another train, a quaint little red engine that will take me to the highest railway station in Europe, at nearly 3,500 metres above sea level. At the top, the massive Aletsch glacier is intact, spreading out before me like a sparkling, diamond-studded carpet, the icy snow crunching under my feet. The sky is mercurial: one minute bluer than blue, and in another, clouds sweep in under and around the Jungfrau peaks. If you were ever wondering what the true definition of breathtaking is, well, I’m seeing it.

Viewing platforms surround the attraction at the top, a kitschy museum called the Ice Palace and a store that takes me to the source, Lindt Swiss Chocolate Heaven. On my very first day in Switzerland, I’m already surrounded by chocolate of all kinds — spicy pepper and salted caramel, white, milk, dark, currants and nuts. A bag of the little foil-wrapped balls of chocolate sustains me through the rest of my trip (and makes for an excellent ice breaker way to make new friends on trains).

I come down from the clouds. Another train, another town — this time, Interlaken. Like in Grindelwald, I take to the mountains such as the Eiger, Mönch and Jungrau peaks, as well as Lakes Thun and Brienz, the twin bodies of water that give Interlaken its name. The funicular takes me up, up and up the steep climb to Harder Kulm, and the lakes dotted with white sails and fishing boats come into view. The surrounding summits are like the verdant-covered arms of a bodybuilder wrapping the lakes in a muscular embrace. It, too, is breathtaking.

Back at lakeside, I’m at the Funky Chocolate Club, where I join a chocolate workshop. Make my own? And I get to take it with me? Sign me up. The class learns about different kinds of chocolate, the percentages it takes to qualify as white, milk or dark, how you can add all sorts of flavours and the importance of tempering the chocolate. My arm muscles are put to the test, whisking the semi-sweet chocolate chips into the darker chocolate mixture so that it becomes bubble-free and smooth so as not to appear streaky when it’s finished.

We’re presented with bar-sized decorative moulds in which to pour the chocolate to set, as well as a selection of extras, such as dried strawberries, nuts, even chili flakes, and patterns that can be imprinted onto the bars to make them look even prettier. The chef tests my mixture. I wait. He smiles. It’s ready to pour. I have to wait until the end of the day to come back and pick up my bars, but when I see how beautiful they look, streak-free, and swirled with white chocolate hearts, dotted with dried pink chilis and flecked with gold leaf, I’m thinking they might be too pretty to eat.

“Are you milk or white or dark?” Who knew that what kind of chocolate-eater you are can really be that divisive? I’m at an outpost of Laderach chocolate, where you can take a confection-making class — so naturally, I find myself here, popping on a chef’s toque and an apron, and getting my hands chocolatey. I was joining a group travelling with the tour company, Collette, on its inaugural itinerary that focuses solely on Switzerland. And, yes, the obligatory chocolate.

To get to them, and it, I’ve travelled across the country closer to the French border, to Neuchatel, one of the most perfectly preserved cities of the Belle Époque in Europe. But it is in Vevey on Lake Geneva, one of the “pearls of the Swiss Riviera” where Charlie Chaplin made his home and food-giant Nestlé still does, where my travelling companions and I revel in mixing and pouring and exploring flavours. Our tastes vary from salty to sweet and, while enjoying this bonding time, we discover we’re a rather democratic mix of milk, white and dark fans. (Fun fact No. 3: white actually is chocolate, with all the cocoa butter but not the cocoa nibs that give chocolate its dark appearance, and sometimes a heck of a lot of milk powder.)

But it’s not just our tour that features a knowledgeable guide; turns out, our welcome reception includes a chocolate guide, as well. Before more tasting, she shows us a pod-like fruit that’s filled with slightly slimy white-ish nodules, each housing and protecting their own precious bean.

More bonding ensues over surprising ways to eat chocolate: From savoury foie gras on chocolate toasts to mini-bites of shrimp and chocolate-chip-dotted cream cheese to even overflowing bowls of oversized pink paillettes, a new type of chocolate in development. Oh, dear, we’d have to add pink to our list of “what kind of chocolate are you?” debate.

The wines of the region soothed all, particularly pinots and also a grape I had never heard of, Chasselas. It is so prized that the Swiss are reluctant to export much of it. As one vintner told us, “we like to keep it to ourselves.” Too late now — your secret is out.

Before I travel back home, I make one final stop back in the Swiss German region, in the storied alpine town of Zermatt. And here is where I make the sweetest discovery of all. Zermatt is also the home of one of the most famous peaks in Europe, the Matterhorn. I took a train again, this time to ascend the Gornergrat, on its namesake open-air cog railway (read quaint) to get a closer look at the elusive icon. It’s been hiding its good side from my grounded vantage point behind a puff of cloud that refuses to leave its side, so I’m not quite getting the full effect. There are older hikers with their poles, tourists with their phones and cameras along with me and my guide. We’re going hiking, too, after we have a sip of hot cocoa and strudel at the top – to work off all the chocolate. The second largest glacier in all of the European Alps rolls out its icy carpet for miles, punctuated by more than two dozen peaks that pierce the sky, some soaring to heights of more than 4,000 metres, including the Monte Rosa Massif, the highest Swiss mountain, within my view. I did say breathtaking defined. But here, it defies definition.

We hike out, our first goal is Lake Riffelsee, a clear lake in the middle of the mountains, and less than an hour later, we round a bend in the trail and there it is. Still and perfect and shining like a looking glass in the sun. I stop. It isn’t the lake that has me mesmerized. It’s the mountain. Reflected in Riffelsee’s surface is a peak, so clear at first it’s hard to tell which is the real thing. The Matterhorn. Jagged, triangular, steely dark with just a dusting of icing sugar snow — right before me, the Toblerone of my childhood.

If you go To take this tour, go to www.collette.com; for more Switzerland, go to www.Myswitzerland.com; and www.jungfrau.ch/en-gb.

Don’t Miss Lake Geneva acts as a natural border between Switzerland and France and another “pearl,” the Swiss town of Montreux, famed for its music festival and for Mountain, the recording studios that Freddy Mercury and his Queen bandmates created. A good way to get there is by the local ferry from Vevey. The studio features a self-guided tour, well worth it whether you’re a fan of Queen or the hit film, Bohemian Rhapsody.