Meet the Conoodlers, the Canoeing Club Portaging Their Way to a Long Life 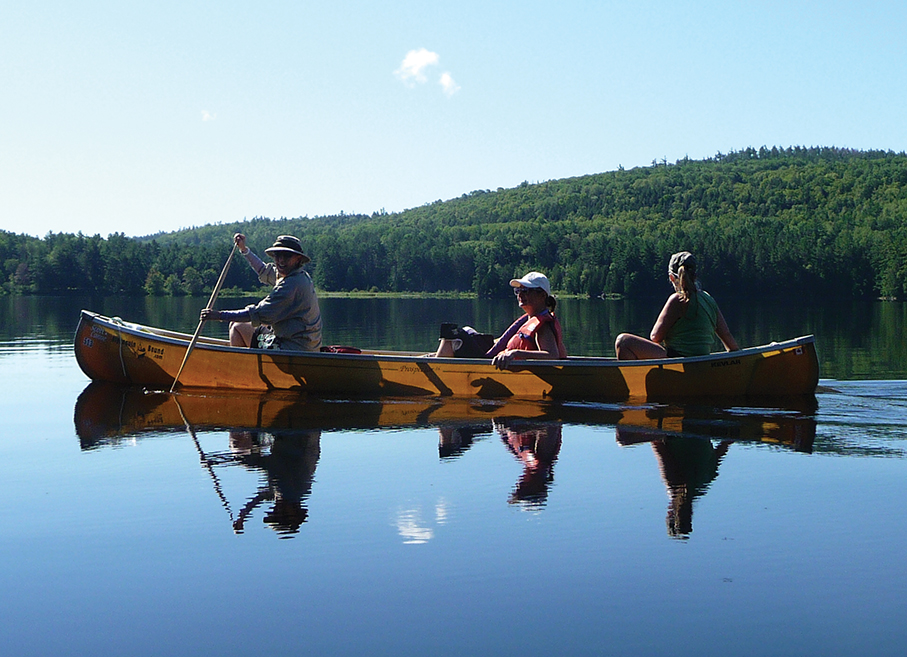 For these women, a decades-long summer ritual of water and the wilds of Algonquin Park is more than just a girls’ trip.

If you happen upon a bunch of women waving pool noodles around the interior routes and portages of Algonquin Park this summer, it is likely a rare sighting of the Canoodlers, the all-female canoe-tripping club. The group’s members — a core of eight gals with a rotating cast of up to 12 — are aged between 51 and 64.

Twenty-odd summers ago, in Pickering, Ont., a bunch of moms met each other when their kids were in the same Girl Guides troop. Some of the moms signed up for the Guides’ wilderness training courses, and they duly set off with their daughters and some paddles. By the next summer, the younger generation had moved on to other recreational pursuits. But the moms stuck together, and their epic canoe trips became an annual ritual.

“We want to keep challenging ourselves as we get older,” says Cindy Coccimiglio, one of the early core group members. “Every year we start out at my Haliburton cottage and return to it after to recover and recount the tales. My husband always has a pot of his homemade pasta sauce and a roaring fire waiting for us.”

In the beginning, with young families at home, the trip was an excuse to get away from the chaos of daily life and enjoy some quality grown-up girls’ time. But over the years, the trips have become, says Coccimiglio, “a constant in our lives.” Through the ups and downs of life, children’s milestones, through deaths and divorce, hypothermia and hip replacements, the ladies gather twice every spring for convivial planning sessions for the annual four- to six-day journey each August (fewer bugs!).

Heather Pierce, known affectionately as Head, is the logistician who deploys the original planning document, adapted from a Girl Guiding original, outlining how the costs and responsibilities are split evenly. Pierce is also the risk management officer, on whose judgment they rely for weighing out safety issues. The group has dodged tornados and lightning over the years — once memorably sitting out a particularly bad electrical situation under the overhang of a wealthy cottager’s sauna — but, knock wood, there have been no major injuries.

Pierce’s aunt, who was at the time in her late 70s, joined the group for a few years, and her contribution to the proceedings was to pen their original song (set to the traditional Scouting tune “Quartermaster’s Store”). “We help each other have the experience,” says Coccimiglio. And in the Girl Guide spirit, they pitch in when others need help. “We take the portages in multiple stages.” Adds Pierce about her aunt, who carried her own pack and was more than game for the adventure: “She said to us, ‘If anything happens, throw a tarp over me and paddle me out!’”

Unlike younger campers, who are often on the move to a new lake every night, the Canoodlers choose a route that involves paddling and portaging in to the camp sites, but they then stay put to set up a base for day trips.

Over the decades, they have consciously tried to visit as many parts of the vast wilderness park as possible through different access points. And a new accommodation they’ve added over this past couple of years is the use of a water taxi to start and finish the route deeper into the interior. “We want to keep doing this,” says Pierce, in acknowledging some new limitations that come along with age. “And we are trying to figure out ways to make that physically feasible.”

The sense of accomplishment is worth it, she says. And, of course, there is wine at the end of the day (and some mega-jugs of Bailey’s, judging by an old menu-planning list). Of all the stories from all the years, the one where the four-litre bag of wine got left behind on the portage is recounted the most often.

“Doesn’t even have to be cold,” says Coccimiglio, “though we do chill it in the lake.” After a hard day’s paddling and humping packs, “It is the best wine you’ve ever tasted. Though that might be because of the excellent company!”

The ladies’ outdoors skills, long honed by annual forays, are now automatic, and the group falls into a familiar routine. One member, Dagmar Sajovic, who hails from Slovakia, is an experienced back-country camper with mad wood-finding skills, so she often sets out to do fire-pit prep; she always sleeps with a paddle outside her tent, just in case. Marie Yarmoluk is the passionate camp cook, who has a personalized system for moving the rocks around to customize the outdoor grill to her height preferences. “Marie also tends to decorate the boom box area,” adds Pierce, which is what the Canoodlers call the environmentally designed open-air bathrooms park services provides at all sites in the park. Last year, she prettified the area with accent trim, made up of flat stones, then moss, then pine bark.

Other members all add their own talents to the mix: Cathy Scott is a registered nurse who brings along wellness tips for the group; Mary Druce is up first every morning to get the coffee going; Bernadette Button has a fantastic voice and entertains with song on portage; and Janice Hartwig is the gadget master, seeking out nifty new hammocks, axes and kitchen gear as well as new board games.

The women have competitions to throw the bear sacks up into the branches to keep the food supplies safe at night. Their only loss thus far was a couple tubes of PB and J to an intrepid raccoon. And as the campers age, technology is giving them a hand. “The gear has improved fantastically over the years,” says Coccimiglio. “It’s lighter in weight, better quality. Some of the fabrics are made by NASA!” They wake up feeling stiffer from sleeping on the ground these days and have added in impromptu sun salutations at water’s edge to get out the kinks every morning.

But mainly, the draw is the total change of mindset, says Crystal Tremble, who is not only the group’s passionate photographer but also a proficient planner who books the sites and serves as the group’s navigator. Camping, she says, was unplugged before unplugging was even a thing. “You pay for the permit and pick up the canoe rentals,” she says of the early morning arrival at water’s edge on their chosen route. “And the moment you get into the canoe and pick up your paddle, everything else falls away.”

Canoeing, the ladies remind us, is a mindful activity. Everyone gets into the zone, and the connection to nature and to each other begins. Time slows down. “We are our best selves,” says Tremble.

And what about those pool noodles? They make for great floaties to watch the sunset on, and they help with spontaneous synchronized swim choreography. But mostly they are the emblems of this group of women who carve out the better part of a week each summer to be alone together in nature.

They set up a tarp and, on clear nights, they lie on their backs side by side for their own private sky-viewing party.

“The best thing,” says Pierce, “is when we all see a shooting star.” Wishes, already granted.