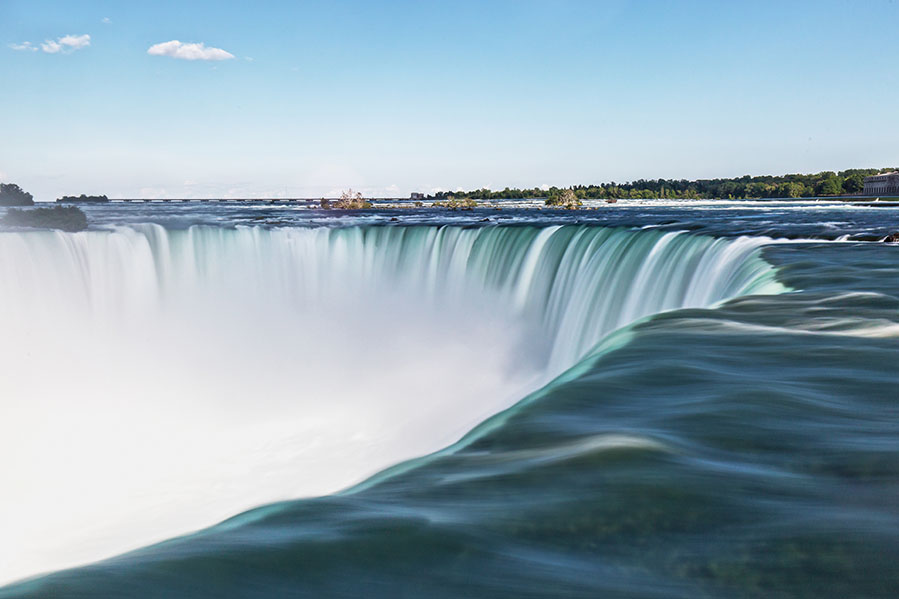 By land or at sea, there really is no place like home for first-time experiences.

The flimsy red plastic poncho does little to protect us from the thundering spray of the Horseshoe Falls. I feel like Jean Peter’s Polly at the end of Niagara, trapped in a launch with kidnapper George (Joseph Cotten) and being tossed about like a cork in the river above the falls. Only we’re at the base of the falls on the Maid of the Mist tour — and the boat is not the Maid of the Mist of my childhood but the Hornblower, a name that doesn’t have the same romance as that of the original. In 2012, after a 166-year relationship, Maid of the Mist was dumped by the Niagara Parks Commission: the Canadian side of the falls is now serviced by the same American company that operates cruises to Alcatraz and the Statue of Liberty. Hard to believe that neither my travelling companion Aprile nor I have ever been on the 15-minute tour in all our 60-plus years. But that’s not our only first on this trip.

Our group is the first to explore French Canada and Great Lakes on the inaugural voyage of the brand spanking new Victory II on Victory Cruise Lines — so new that we help rip the plastic coverings off the cushions on the Observation Lounge on Deck 5.

This small ship isn’t a grand floating hotel like the luxury transatlantic vessels. Designed for coastal cruising, it lacks casinos, pools and cigar rooms — and kids! But with only 200 guests, the sun deck, dining room, casual restaurant, bar and lounge are never crowded, and there are no lineups to disembark for the excursions at each port. With the small guest list and 80 staff, needless to say, service on board is impeccable, and we’re all pampered on the 10 days of sailing from Quebec City to Detroit — including Sarge, a large black Lab service dog accompanying a woman with macular degeneration. At almost every meal, where he lies at her feet, a server brings him stalks of celery. Sarge takes advantage of everything the cruise has to offer — including the voyage of the falls, although he doesn’t wear the red poncho.

It’s interesting seeing the familiar from a different perspective. In Quebec City, for instance, we’re docked at Le Vieux Port, which I hadn’t visited the last time I came to North America’s only walled city. Seen from the water, the city is imposing, almost intimidating, with the ramparts encircling the town and the funicular linking the Haute-Ville with the Basse-Ville where our ship is docking. From the port, it’s only a short walk on narrow cobblestoned streets to Place-Royale, where Samuel de Champlain founded the city in 1608. Here stands Notre-Dame-des-Victoires; built in 1688, it’s the oldest stone church in North America.

Then a ride on the funicular takes us up to the Dufferin Terrace that wraps around the Château Frontenac. Our foursome has a quick tour of the magnificent grande dame and the shopping stalls of the outdoor market before stopping at Le Petit Château for café au lait and crêpes, feeling very French — and just a little touristy. Some of our shipmates have opted for a visit to the Plains of Abraham, where the French tried to defend their city against the marauding English in 1759, followed by a cable car ride up the majestic Montmorency Falls; at 275 feet, they’re about 100 feet higher than the legendary Niagara Falls but, for some reason, they never captured the world’s imagination.

The history and sense of place offered by Quebec City stands in contrast to the frivolity of our evening ashore in Montreal where we travel the Old Port on a pedal-powered four-wheeled bike. Overhead, the brave — or foolish — experience a 30-minute zipline experience, flying across the Old Port and enjoying aerial views of Montreal. We’re more grounded, people-watching and shopping along the urban waterfront. As we leave Montreal, we sail past the stacked box-like apartments of Habitat 67, the model housing complex designed by Israeli-Canadian Moshe Safdie and built as a pavilion for Expo 67 — an incredible sight from the water, almost like a cartoon version of an apartment building.

From the narrow canals skirting the rapids south of Montreal, we enter the locks of the Saint Lawrence Seaway — two American, five Canadian — which connect the Atlantic Ocean to the Great Lakes, allowing ocean-going vessels inland as far as the western end of Lake Superior. According to the captain, the St. Lawrence Seaway is the most difficult navigable waterway in the world. We watch from the observation deck as we move between the concrete walls, followed by smaller powerboats like a mother duck with her flock. In total, the locks lift us 180 metres above sea level — the height of a 60-storey building.

Moving into Lake Ontario is mind-boggling in scale. The horizon is water-meeting-sky instead of shoreline as it has been for the last four days. Early explorers must have thought they had paddled into another ocean when they reached the Great Lakes.

To bypass Niagara Falls, we enter the historical Welland Canal, first built in 1824, with a total of eight locks connecting Lakes Ontario and Erie. From here, the ship moves out into Lake Erie, heading for Cleveland. Somewhere along the way, a boat pulls alongside and ties up to us. U.S. customs agents board the Victory II as we continue sailing to check our passports as we cross the international line drawn through Lake Erie.

A visit to Cleveland must, of course, include a visit to the Rock & Roll Hall of Fame, a five-minute walk from where we are docked. Designed by the recently deceased American-Chinese architect I.M. Pei, who also created the Louvre Pyramid in Paris, the building cantilevers out over Lake Erie while simple geometric shapes combine to create a distinctive skyline. History may prove me wrong but that architecture shall resonate as strongly as the Quebec City skyline.

The captain’s farewell dinner continues the Victory II’s tradition of fine dining and fine wines. Between courses, we happily compare our experiences of the 10 days of sailing to six cities in two countries — all within an hour-and-a-half plane trip from home.

For more information, go to victorycruiselines.com.

A version of this article appeared in the July/August 2019 issue with the headline, “Cross-Border Cruise,” p. 80-81.