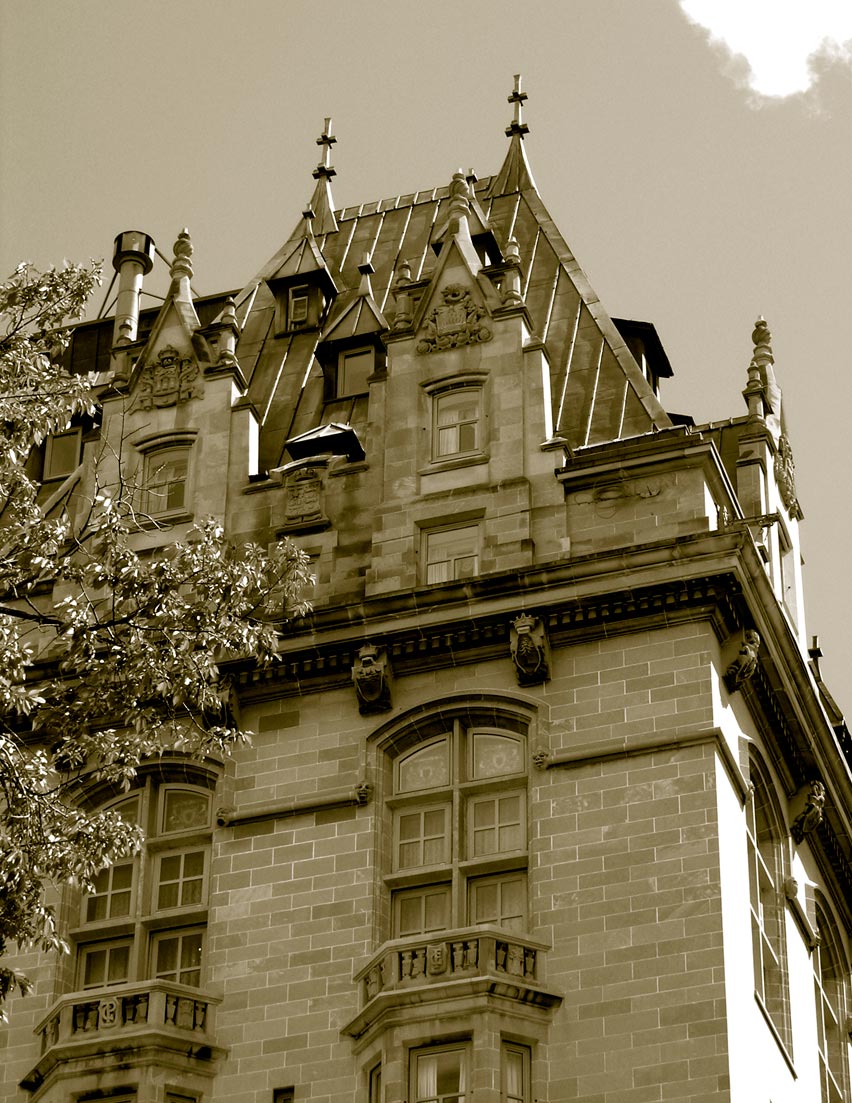 Are you brave enough to spend the night in one of these spooky spots?

Murder, forbidden love, tragedy and mysterious deaths … sounds like something we’d look for in a work of fiction, not a hotel. However, ghost sightings and other paranormal happenings are more than just local legends – they’re also major attractions for thrill-seekers and skeptics alike. Would you dare to spend the night in one of these haunted hotels?

This grand hotel, a national historic site marking the city’s skyline, was originally built to offer luxurious accommodations for well-to-do railway passengers. You won’t see it on the hotel’s website, but the second floor is reputed to be haunted. Guests have reported waking up to find ghostly figures at the foot of the bed – sometimes a man or sometimes a woman dressed in a period ball gown. The figure disappears, leaving guests wondering if it was just a dream.

And then there’s room 202 – there isn’t any proof, but maids have supposedly reported blood seeping through the walls.

Nestled in the Canadian Rockies, this hotel – modelled after a Scottish baronial castle – is the site of some very strange events, according to legend. For example, the grand staircase, apparently now blocked off, was once the site of a wedding disaster. The stories vary, and there aren’t any official records, but a bride supposedly fell to her death on those stairs. Some say she tripped on her veil; others say she panicked after her sweeping gown caught fire from one of the candles. It’s rumoured that her spirit still wanders the halls of the hotel in her bridal finery.

And then there’s Sam, the helpful bellman who appears from time to time to help out the guests.

There’s also some question as to why there is no Room 873. Some tell stories of a family who died in that room – and continue to haunt the floor. Some of the creepier versions of the tale involve a child’s fingerprints that won’t come clean from the mirror. In the stories, the room was sealed off, the doorway cemented over and employees have been sworn to secrecy.

This ship isn’t shy about its hauntings – in fact, it celebrates them. Once nicknamed the “Grey Ghost,” this cruise liner was used as a troopship during the Second World War and saw its fair share of death. (For example, a cook was reportedly murdered by his unhappy charges.) Though the ship continually dodged German submarines, it accidentally destroyed one of its escorts, and more than 300 crewmen were left to drown due to military procedure. Many areas of the ship are reported to be haunted.

With the help of staff guides and special effects, guests can explore the paranormal on board. Daily events include the Haunted Encounters Tour and the Ghosts & Legends show, which highlights some of the most haunted places, like the stateroom or the first-class swimming pool – a popular spot for ghost sightings. Guests can go on self-guided tours or participate in a scavenger hunt. In addition to the annual Halloween Terrorfest, the ship also hosts Ghostfest in January.

Historic fact and romantic mystery surround the story of Kate Morgan, a guest who stayed at the hotel in 1882 to meet with her estranged husband. She checked in on Thanksgiving Day, and her body was found on the steps a few days later. Little was known about this stranger or whether her death was murder or suicide. The case received widespread publicity due to the mysterious circumstances, and the hotel has even published a book on the topic – appropriately named Beautiful Stranger.

Guests report feeling strange breezes, hearing odd sounds and seeing a lady in a black lace dress. If you’re feeling daring, try staying in her room – which could be 3502, 3327 or 2237, depending on which version of the story you hear.

Would you stay at the scene of a brutal murder? On Aug. 4, 1892, businessman Andrew J. Borden and his wife were found dead in their home. Their youngest daughter, Lizzie, was tried for the horrific crime but found innocent.

In recent years, the lovely Victorian-era home has been restored and now operates as a bed and breakfast. Tours of the home are offered throughout the day, and there’s also a museum on site. You can visit – and even sleep in – the John V. Morse Suite where Abbey Borden’s body was found.

According to Forbes’ list of Most Famous Haunted Houses, guests to the home have discovered ghostly faces in their photographs and have even heard children laughing. The case was never solved.

Stories have been circulating about this French Quarter hotel for years. One popular tale involves a young family staying at the inn. The parents, Josephine and Jacques Begere, left their son in the care of a nanny while they ventured into town. The husband was killed in buggy accident, and the wife died a year later. Their son reportedly wanders the hotel looking for his parents.

According to the Historic Hotel Society of America, an investigation by the International Society of Paranormal Research revealed many strange stories at the site. Former “ghostly” staff continue to help out – including a maid with high standards, a butler, a maintenance worker who like doors open and an engineer who continues to keep an eye on the place.

The hotel hosts a Haunted Weekend every year around Halloween.

The United Kingdom is home to more than 450 haunted hotels, according to the UK Haunted Hotels Guide. With the rich history of the area and the many historic buildings, it’s not surprising the area seems to be populated with spirits.

One of the many haunted hotels is Dalston Hall, a 600-year-old manor house in Cumbria that even managed to spook TV producers filming episodes about the hotel. Many of the rooms are haunted – such as Room 4 where a maid lived before throwing herself off one of the towers. Then there’s Room 12 where girls’ whispers and giggles can be heard coming from a bathroom that has been blocked off. Lady Jane, a ghost in Tudor dress, haunts the entrance hall, and Sad Emily looks longingly to the south as if waiting for a man who never returned.

And if you arrive at night, watch out for the handy man who wanders the grounds.

What better setting for a tale of forbidden love than a luxurious estate? Before becoming a hotel, Shieldhill was owned by the Chancellor family for more than 750 years, and parts of the estate date back to the 12th century. However, it was during the 17th century that the “Grey Lady” lived and died in its walls. No one knows the whole story but, according to the hotel’s website, there are two different tales surrounding her death. One suggests she was driven to suicide after being molested by soldiers who were travelling through the area. The second and more popular tale is that she fell in love with a commoner. When her father forbade them to marry, she killed herself.

Legend has it that she prefers to stick to her own room in the Keep – a room that is available for brave guests. No word yet on whether she likes to share.

This hotel is the setting for another tale of love gone wrong. According to Forbes, the haunting tale centres on a peasant boy who fell in love with a baron’s daughter. The baron forbade them to wed and forced his daughter into an arranged marriage. On the day of her wedding, the boy was found hanging in what is now Room 324. It is said that his spirit never left the room.

Are the stories fact or fantasy? Well, very little has actually been proven to everyone’s satisfaction and, in most cases, there aren’t any records backing up claims a tragic event actually happened. However, conspiracy theorists see a lack of evidence as proof of a cover-up, so don’t expect everyone to agree!

There are thousands of haunted places all across the globe and countless books and websites about them as well as the stories that get passed by word of mouth. Some tales, like the bride-falling-down-the-staircase, are popular tales attributed to several hotels in different countries. “Helpful bellmen” or staff members have been spotted in hotels around the world. Sometimes, guests have simply heard strange sounds or had a strange “feeling” about a place – and even those occurrences are rare.

Whether we believe it or not, there’s something about a good story that captures our imagination. Haunted sites and tours are meant to be enjoyed for their “fear factor,” but most hotels can be visited during daylight hours.