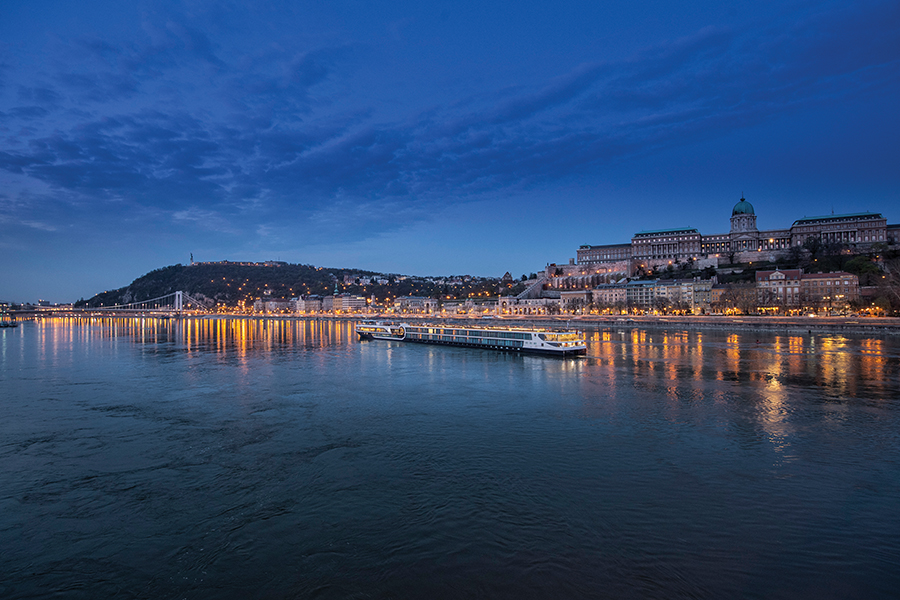 She’s the godmother of memoirs, a cruise ship and self-help that connects. Vivian Vassos eats, prays and loves with Elizabeth Gilbert

Elizabeth Gilbert has me in her grip. Literally. It’s not her written words that have me immobilized but her arms. I am in her embrace.

We’re on the Avalon Envision, Avalon Waterways’ latest Panorama-class river cruise ship, on the Danube in port at Budapest. Gilbert has been chosen as the ship’s godmother, and tomorrow is the christening, or naming ceremony if you’re agnostic, and she’s excited to show off the ship. It’s stunning, with larger-than-average cabins that feature floor-to-ceiling windows that open wide to create a balcony in suite. “Let me give you a hug,” she had said as she greeted me, a grin nearly as wide as her face. “I love giving hugs. Everyone can use one.”

I was happy to oblige, being a bit of a hugger myself. She pauses so that my travelling companion sneaks a few snaps with his phone. She leans in and says something funny, and we both laugh. Good to meet you, too!

You know who Elizabeth Gilbert is — and all because of these three words: Eat, Pray, Love. Gilbert, who turned 50 this year, inspired us through her bestselling memoir to heal, in her case after divorce, through travel. First to Italy, where she ate (“The problem with Italy is, of course, how fat you get. It’s a real struggle”); then to India, where she prayed (“I feel like I didn’t get to see much of India because I was in an ashram for four months but I got to feel an ancient wisdom that changed my life and I really can divide my life from before the four months in that ashram to after”); and finally to Indonesia, where she met and fell in love with Jose Nunes. (The couple is no longer together, and Gilbert has gone on to have more love in her life since.) Gilbert, whose most recent novel, City of Girls, was released this past June, followed up Eat Pray Love with Committed: A Skeptic Makes Peace with Marriage and then with the self-help book, Big Magic: Creative Living Beyond Fear.

Gilbert, who likes to be called Liz, is as easygoing as the Danube is today. So why Liz as godmother? “We seek someone who truly personifies the ship’s name, and Elizabeth Gilbert has a lovely way of envisioning the world – perfect for the Avalon Envision,” says Stéphanie Bishop, managing director, Canada, for the Globus family of brands, Avalon’s parent company. “With her refreshing and inspiring take on life and on travel, she’s a perfect godmother.”

Well-travelled as she might be, Gilbert is still a bit of a newbie. “This is not just the Envision’s maiden voyage, it’s my maiden voyage, which was why I said yes, because cruising is something that I’ve never done,” she says. Gilbert is travelling with her parents, John and Carole. “My dad loves it,” she says, pointing them out. “He’s the one staring out the window, lost in the Danube. My mom is here knitting and paying close attention. The other reason I said yes was because I wanted to bring these guys. I think it’s a really nice way that we could do this as a family.”

But how we eat, pray, love — and travel — now is not where we were even just a dozen or so years ago, when Gilbert wrote her memoir. There’s Tinder for dating; there’s Airbnb for places to stay; there’s Uber for cars. How does she see travel now? “It’s infinitely easier. I would’ve loved Airbnb. It was so hard for me to find my apartment in Rome,” she confesses. “I’d always stayed in a motel. I don’t think it necessarily made me a better person to go through that struggle. I actually am all for things that make it easier. And I would’ve loved to have had an app that would’ve made it possible for me to stay in touch and be able to communicate with my friends while I was travelling. It was hard. I was lonely. I missed them.”

And speaking of Eat Pray Love, it’s a question I can’t resist. Can one apply any experience, even over the course of a day, to these three words?

“I would say that Eat was the first night here in Budapest, and my mom had already been here for a week,” Gilbert replies. “She took me around the city because she knows it already, and we went to a local café, and I had goulash and dumplings and beer and companionship and love.”

“I just came from meditating for 45 minutes with the windows open in my suite, but my ‘monkey mind’ today was you should open your eyes and look out at this beautiful view, and I was like, no, you should focus on your meditation. No, you should open your eyes and look at this view. No, you should focus. You should shut your eyes and think about serenity. No, you should look at the view. So I was kind of doing this the entire time, but that’s a pretty good description of how I meditate anyway. I think that the greatest gift that you can offer to the world is to be one less terrified person. Like, that’s why I do all the spiritual work that I do. That’s why I was meditating for 45 minutes today. That’s why I show up for clearing out the insanity in my own mind because I think the greatest gift that I could offer to the world is to not be overcome by terror and anxiety because it makes you make horrible decisions.”

“Bringing my parents, and I’m here with my sweetheart, who’s meeting my parents for the first time, and bringing these people together, who I care about, and giving them this beautiful environment in which to get to know each other.”

Gilbert goes on to talk about the many teachers she’s had in her life, but in this moment, instead of me being the interviewer, she is suddenly the teacher. It’s her spoken words that now have me in her grip. Come for the hug; stay for the life lessons from Liz.

On ritual and happiness

“I believe in and love ritual. I think it’s essential for human happiness and I think every culture has understood that. I think we’ve lost that in the West recently, largely because ritual tends to be connected to religion and when you leave your religion [for whatever reason], you kind of lose ritual. So I think that people who have had to change or shift their ideas about religion are often like, now that this is no longer part of my life, how do we mark the momentous moments? So I think it’s really essential that people are empowered to create their own rituals. But this [trip] was a good one because this one is pre-created. This is ancient. It’s even called a christening, so it’s got a religious background. And so ritual is the Venn diagram – ritual’s the spot in there that links you from what you were to what you’re becoming, and without it, you’re not safe. It’s essential for mental health. It’s essential for the health of the culture. You’ve got to have it.”

“I think universal human friendliness is the first step to finding courage. I know that if I’m afraid for some reason, then I know that I’m suffering, and if I know that I’m suffering, then I know that there’s a human being that needs compassion, and it’s this one. I think compassion toward your own fear makes you more compassionate to other people’s fear, and that helps as well. But it’s not about eradicating fear – it’s about befriending it, being generous toward it and continuing anyway. So the very first step is to offer a handshake to myself, for friendliness. So I say to myself, how can I help you? And you start from there. When I’ve done brave things, I ask myself, what’s the alternative? And so if I allow my fear to guide the decision the alternative is usually not very good. So the alternative to doing the brave thing, if I look at it very clearly, it doesn’t usually look very appealing. So I’m scared to write this book. I don’t want to write it. I’m scared, what’s the alternative? Usually the alternative is doing nothing, you know? So kindness is, weirdly, the first step of courage for me.”

“I’m not sentimental or a traditionalist. I think travel will change your world. I think the only world that you’re ever going to live in is yours, the one that you perceive, the one that you interact with. So I’m going to start by trying to change mine and that means, how can I make my world less hostile? How can I make everything that I see reflected in the world, that I find problematic, how can I fix that in me? How can I make me less prejudiced? How can I make me more generous? How can I make me more kind? It’s hard enough changing me, how can I get rid of my hatred? How can I be more forgiving? It’s a big jump, just on one person. It’s kind of a full-time job. And that’s my work. I’m okay with change, and I also think, with a lot of the stuff that’s happening on the internet, socially, it’s a little bit too soon for us to tell what it is. You know, we’re in the first generation it’s being tested out on. We’ll see. I’m not generally thinking that life was better at a particular time than it is now. I think we all get really nostalgic for some sort of an idea of a golden age, but my experience is most people who were living in what we think of as a golden age didn’t know that they were in a golden age.

“I think you can make this moment a golden age and you have just as much at your disposal to make this moment as fascinating as anybody in history ever did. Golden ages are available at all moments, depending on how open your heart and your mind are to whatever you want.”

www.avalonwaterways.ca; 1-800-268-3636 Every Avalon ship is a Panorama-class suite ship, where the windows easily become open-air balconies. Most on-shore attractions are accessible and a walk away from port. Recently launched is the company’s Avalon Choice, an included program that fosters a deeper connection with the destination, in which you can choose from a varied list of Classic (think a museum, castle or cathedral tour), Discovery (cooking class with a local, anyone?) or Active (how about exploring a city’s underground cave network or a guided bike tour?).

A version of this article appeared in the November/December 2019 issue with the headline, “Life Lessons From Liz,” p. 86-90.

The World Is Your Oyster: Adventures, Discoveries and Getaway Ideas for Your Next Vacation