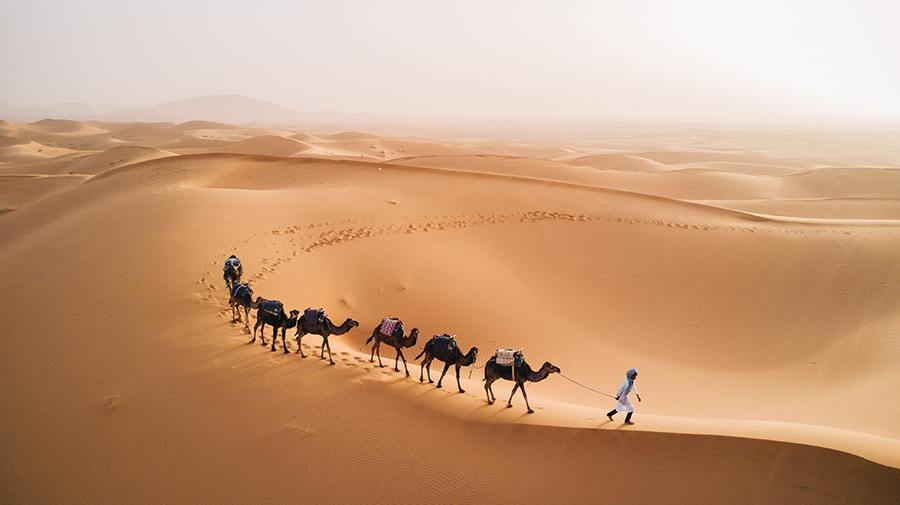 Morocco’s style capital is more vibrant than ever with shopping, dining, art, culture and jaw-dropping places to stay. Viia Beaumanis checks in with this definitive city guide

Marrakech has bewitched tastemakers since the ’60s when Yves Saint Laurent made the city his second home, welcoming his fashionable coterie into a series of extravagant villas designed by his good friend and interior designer Bill Willis, who invented boho chic decor as he trawled the souk for treasures. Gianni Agnelli, the Rolling Stones, Talitha Getty — the list of stylish insiders who flocked to Marrakech in the couturier’s wake is long.

Iconic fashion editor Diana Vreeland laid eyes on the caftan here, splashing it across the pages of Vogue. The Hermès clan founded the Royal Polo Club. The Bulgari family lines their residence in Moorish tile and textiles, and Sir Richard Branson is opening hotels here. Master perfumer Serge Lutens, seduced by the scents of a bazaar overflowing with tuberose, vanilla and chypre, has lived here since the ’70s, crafting cult fragrances — Féminité du Bois to Ambre Sultan — in his labyrinthine sanctuary in the 14th-century medina, the walled-in heart of Marrakesh that encloses its fabled marketplace.

North African culture and artistry, layered with European elegance and insouciance, Morocco’s style capital is a quixotic contrast of Old World and New. It’s a kaleidoscope of caftans and kasbahs, its denizens getting around by car or camel. There’s the juxtaposition of an antediluvian souk with contemporary art fairs, while oualidia oysters and champagne are enjoyed in trendy boîtes as the sunset call to prayer rings out from local mosques.

A jet-set playground for half a century, today the city is more dynamic than ever. Creative expats are joined by a generation of young Marrakechis, unleashing new galleries, boutiques, hotels and events — even recasting Sidi Ghanem, a once-barren industrial park just outside town, into a thriving design district jammed with shops, bistros, workshops and art space.

A swathe of hip new restaurants has cut across the medina. The most stylish among them include Le Jardin (lejardinmarrakech.com), a leafy courtyard restaurant wrapped in deep green mosaic tile; the rooftop Nomad (nomadmarrakech.com); and the lunch-only La Famille, a courtyard with a vegetarian menu and a whitewashed Ibiza vibe. As very few places in the medina serve alcohol (they must be located more than 100 metres from any mosque to obtain a licence), it’s handy to know about Kozy Bar, which is equipped with a liquor licence and a charming rooftop terrace that overlooks the 16th-century El Badii palace, complete with pelicans that perch along its ramparts.

Not that it’s hard to find a cocktail in Marrakech. Hivernage and Gueliz, the modern neighbourhoods that wrap the medina, are scattered with watering holes and restaurants with lengthy wine lists. You’ll find an elegant crowd downing rosé under whirling ceiling fans on the veranda at Café de la Poste (grandcafedela poste.restaurant).

Just around the corner, Kechmara (kechmara.com) is popular for its breezy terrace, cool bar and roster of groovy DJs. A couple blocks over, Azar (azarmarrakech.com) serves fine Lebanese food in a high-glam room enhanced by nightly belly dancers who balance flaming candelabras on their heads. The new +61 (plus61.com) from Sebastian de Gzell, the city’s hippest restaurateur, blends Mediterranean with Middle Eastern and South Asian cuisine. Out by the Palmeraie, the city’s famously fun supper club, Bô-Zin (bo-zin.com) morphs into a table-hopping drinks-and-dance party, replete with drummers, dancers and DJs. For the classic Moroccan evening, it’s Dar Yacout (daryacout.com), an historic Moorish palace in the medina with interiors by Willis, which specializes in local dishes like tagine but also features a liquor licence.

Of Marrakech’s myriad wonders, a profusion of truly amazing places to stay is certainly one of them. Grand palace hotels of the city’s Hivernage neighbourhood and the landscaped estates of the Palmeraie, a palm grove at the desert edge of the city, coddle high rollers in unbridled opulence. For ultra-luxe, nothing quite touches Royal Mansour (royalmansour.com), built by Morocco’s King Mohammed VI. Entered through a four-ton bronze gate, its boutique is stocked with classic Moroccan babouche slippers designed exclusively for the hotel by Christian Louboutin. Perfectly located just off the bustling medina, this walled-in 12-acre oasis is home to the city’s grandest spa, three Michelin-starred chef Yannick Alléno and 53 private riads, traditional Moroccan homes with interior courtyards or gardens. These are drenched in hand-carved woodwork, mosaic tile and Moroccan art. And with its three floors and rooftop terrace wrapped around a courtyard, even a one-bedroom ($2,200) is a private palace and comes with infinite bespoke touches. Monogrammed stationery, liveried airport transfers, VIP service to whisk you through customs — and private tours of the Serge Lutens and Yves Saint Laurent estates. Along the twisty atmospheric lanes of the medina, budding hoteliers are snapping up historic properties with such fervour that sheer competition keeps the rates down. Traditional Moroccan riads redesigned as guesthouses on the cheap and chic end, both DixNeuf (dixneuf-la-ksour.com), an easy-to-find medina address, and the new Riad Goloboy (riadgoloboy.com) in the Hivernage offer well-designed lodging from $120.

For art and culture fans, the city’s diversions are equally endless. The Museum of African Contemporary Art Al Maaden (macaal.org) opened in 2016 to showcase the private collection of Alami Lazraq, a developer on Forbes’ 40 Richest Africans list, across 9,700 square feet of gallery space set in a sculpture garden. On a more intimate scale, the Marrakech Art and Culture Museum (museemacma.com) displays paintings of Morocco by European fine artists of the 19th and 20th centuries. In Gueliz, the French colonial part of town, there’s now a zone of ex-pat-owned galleries — Noir Sur Blanc, Matisse, Re, Tindouf, Bloch, 127 — all within strolling distance of one another. Debuted in 2017 as the fashion icon’s lasting legacy to the city, the sleek Le Musée Yves Saint Laurent (museeyslmarrakech.com) overlooks the city’s legendary
Jardin Majorelle (jardinmajorelle.com), a 2.5-acre tropical garden the designer restored and opened to the public, alongside a Berber museum, café and boutique.

And it’s no surprise that the shopping is spectacular. Kate Moss is a fan of the Ministero del Gusto (ministerodelgusto.com), an emporium of African-inspired furniture run by former Italian Vogue editor Alessandra Lippini. Dispatched to Morocco to oversee production for brands from Kenzo to Lacroix, in 2015, Ludovic Petit debuted Lup 31 (lup31.com) to showcase his own take on North African design. Isabelle Topolina (topolina.shop), a couture pattern-maker from Normandy, stocks a trio of eponymous shops with her vibrant garments (fashion editor Plum Sykes is among her clientele). London’s Sarah Buchan launched Kaftan Queen (kaftanqueen.store). Laetitia Trouillet from Marseille got her start as a personal shopper for Sarah Jessica Parker and Gwyneth Paltrow and now runs her own accessories boutique, Lalla (lalla.fr). The Belgian Valérie Barkowski (valeriebarkowski.com), former creative director for Mia Zia, retails sumptuous home accessories from tasselled bath towels to hand-embroidered linens.

While Gueliz, the Hivernage or Sidi Ghanem laid out with proper streets and addresses are easy enough to navigate, it’s a fool’s errand to attempt the souk without a guide. An Ali Baba’s cave of splendours, doing this on your own as a first-timer assures only that you’ll get lost and pay more. Book Mustapha Chouquir (mustaphachouquir.com) for jaunts in the medina. Reasonably priced at $50 for a half day, this lovely gentleman knows where everything is, helps you haggle and is equally proficient with shopping tours as architectural and cultural forays. If you’d like your entire tour planned and guided, try Cobblestone (cobblestoneprivatetravel.com), where owner Michael Diamond tailors custom itineraries — art, design, cuisine, out-of-town excursions —
finessing every detail from arrival through departure.

Take advantage of TAP Air Portugal’s Toronto-Lisbon flights and the carrier’s stopover program en route to Morocco: up to five nights in Lisbon at no extra charge along with special hotel rates, free museum and gallery admissions, and a mobile app loaded with city tips. (www.flytap.com)

A version of this article appeared in the November/December 2019 issue with the headline, “Marrakech Express,” p. 120-125.