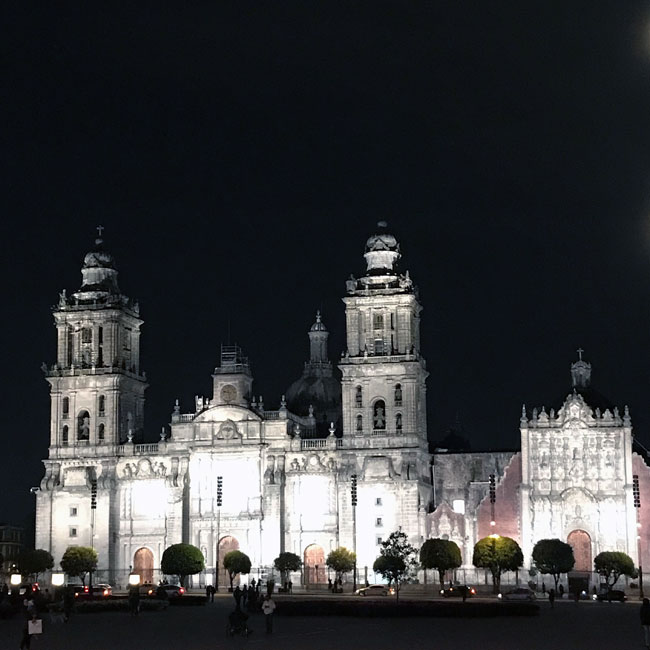 What do you think of when you think Mexico City? Sure, la Ciudad de Mexico is one of the most populated cities on earth, and the side effects are somewhat unavoidable (worse traffic than Los Angeles and Toronto; an air quality that, on occasion, borders on too little), but it’s also one of the most interesting, happening places in the world right now.

Spanish and English are both widely spoken in Mexico City, but many indigenous people ­– Maya, Mixtec and Zapotec ­­– also speak two or three native languages. The city is a tapestry of tongues, of faces and of traditions. Of conquistadors and the Catholic faith. Of artists and revolutionaries.

Remnants of architecture can still be found within the city limits, particularly at the Templo Mayor, but for a true glimpse of an ancient civilization’s genius, take the 30-mile journey to Teotihuacan (“the place where the gods were created”). Consider it North America’s Mount Olympus. The Aztecs stumbled upon the ancient Mesoamerican city in the 1400s and unearthed pyramids, tunnels and colourfully painted temples, then added to it and called it their own.

It’s early morning when I arrive, and I’m gob-smacked by it: the Avenue of the Dead – as wide as the Haussmann boulevards of Paris and 2.4 kilometres long – leads to the Pyramid of the Moon. About halfway along is the Moon’s big sister, the Pyramid of the Sun, standing 66 metres tall, basking in the morning light, daring me to climb to her peak. This is architecture that has stood the test of time; how it even got here is almost unfathomable. No cranes, no computers, nothing but bare hands and ingenuity to create something so concrete in proof that there was life and brilliant life at that before Instagram.

As I take the first of 248 steps, I look up and realize I can’t see the top. I take the steps the way they were built: in four levels, where one can stop, take a breath, survey the view and then journey upward, thanking the modern gods for the support of the handrail, a much more recent invention. At the top, I feel like the master of this domain, a power that comes with this small achievement of climbing the third largest pyramid in the world. Sprawled in front of me, the Avenue of the Dead is dotted with temples large and small, offerings to the gods, some predating the Pyramid of the Sun, which, according to archeologists, was completed around AD 200.

Ancient spirit runs deep in Mexico, and my next encounter is the quaffable kind. I’ve signed up for a tour that focuses on mescal. Mescal is the mother of tequila, distilled all over Mexico from the ubiquitous agave plant. Tequila, on the other hand, can be distilled only in the state of Jalisco from the blue agave plant.

I meet up with a group of booze-swilling ladies (okay, I confess, most are journalists who cover food and drink for a living) in front of a building on a storefront-lined street, where every shop is decked out for Christmas with red and green piñatas, feather boas and streamers. We’re buzzed in and climb to the apartment of a mescal expert. She gestures for us to take a seat round her dining table. As she weaves the story of mescal, as told to us by a translator, her passion and knowledge, no matter what language, which comes through. We’re given gourd-like cups, apparently the traditional vessel from which the drink is best tasted. And tasting is an art in itself. A tiny bit on the tongue to prime the taste buds; an inhalation with the next, bigger sip to fill the mouth with oxygen and distribute the flavour. I sip. One mescal in particular is interesting. It’s made by one of the few women distillers, but she, along with many others, struggle with the crime bosses. Apparently, drugs aren’t the only things they like to lord over. Mescal is their new marijuana; controlling agave and mescal production, their new manna. This is another interesting thing about Mexico City. The people don’t shy away from discussing the country’s history of organized crime; yet for some reason, the city itself feels stable; safety in numbers, I suppose.

Mexico City’s recorded history goes way back. I was surprised to learn that one of the greatest champions of the pre-Hispanic history was the renowned mural artist, Diego Rivera, and husband of the artist Frida Kahlo. His stunning Museo Diego Rivera Anahuacalli, in the southern part of the city, is a homage to his deep connection with his Mexican roots, housing some 50,000 pieces that the artist collected over his life. The museum, completed posthumously in consultation with the American architect Frank Lloyd Wright and made of black volcanic rock, features three floors, each with its own distinct take on this culture. On the first floor, colourfully garish Day of the Dead displays mix with pre-Hispanic archeological finds; on the second, a room showcases Rivera’s utter mastery of the mural medium, all revolutionary tones and art deco angles; the third, a more personal view, with a room dedicated to Rivera’s studio.

But what has me mesmerized are the ceilings: each room could be empty but for the birds flying across the sky; faces looking down on us and depictions of all sorts of pre-Hispanic gods and monsters and spirits etched into the rock – and now my mind’s eye – for eternity.

A boosting of the mind and the body, I had experienced both in this city. But my spirit still had a bit of searching to do. It was the temazcal that completed my journey. So, in keeping with the pre-Hispanic vibe, I head to the W Hotel, where, in the middle of the spa, is a “house of steam,” an igloo built of volcanic rock with a steam pit in the centre, integral to the temazcal ritual.

Inside, three of us surround the rock pit in almost total darkness. Water is tossed onto the hot rocks, creating steam and heat. The shaman leads what is still believed by the descendants of Mesoamerican culture to be a curative treatment. He starts to chant. The sweat is already running down my back as the shaman ladles out water and splashes it on the rocks and on us. I’m just about soaked – and wonder if this what it is to feel “out of body.” He asks us to sing, to repeat after him, and we do, even though for the most part we have no idea what it is we’re saying. It’s a weird release, letting go of just about all your self-consciousness and your peccadillos, whether mildly claustrophobic, afraid of the dark, sweating like you’ve never sweat before, with strangers and singing at the top of your lungs while standing there in a bikini. The shaman brandishes a large bunch of herbs. Again, he splashes water, this time over the herbs, and he begins to slap my body with the bouquet. Not violently, mind you, but still unexpected. I’m being smudged, without the smoke. Over the course of the hour, we are asked to push the negative thoughts away from us and state our positive intentions, repeating them as if we’re talking ourselves into believing them. I emerge from the temazcal and instead of feeling completely drained, I’m energized and ready to go. My head is clear, and my feet feel like dancing. Another in the group is just the opposite, relaxed and looking for a nap. Peccadillos or not, the spirit wants what the spirit wants.

More to do when in Mexico City

If architecture’s your thing, visit the National University of Mexico. Co-designed by renowned Mexican architect Juan O’Gorman (who also assisted in the design of Rivera’s Museo Anahuacalli), the central library’s exterior was put together one mosaic tile at a time, in the middle of a football field, before it was erected. It’s an incredible visual history of Mexico.

Stroll the tony Polanco neighbourhood, where you will find both Spanish Revival and modern architecture and the space age-like Museo Soumaya, with more than 350 works by the artist and sculptor Rodin – the largest collection outside of France. It’s a well-to-do, explore-worthy area.

If you’re a fan of the works of the artist Frida Kahlo, book a ticket (it’s a timed entry) in advance for Casa Azul, or the Blue House, the home of Kahlo and her husband, Diego Rivera.

In the Barrio La Concepcion is the Jardin Centenario, or Centennial Garden, where the church of St. John the Baptist and its caretakers, the Franciscan monks, hold court. Step inside and view this excellent example of baroque architecture.

Then work up an appetite, because walking distance from the church is an excellent local taqueria, Taqueria Los Parados.

Book a night or even just a table for drinks and dinner at the St. Regis Mexico City hotel. The terrace and the King Cole Bar are worth the spend if just for the sky-high views of the city overlooking the Paseo de la Reforma, one of the main avenues of the city, and its array of sculptures and fountains. And in keeping with the tradition that hotel founder John Jacob Astor started in New York City more than 100 years ago, every night when the sun sets, there’s a Champagne-sabreing in the lobby. Salut! Book stays and tours via  Marriott Bonvoy Moments .

In 1934, famed barman Fernand Petiot perfected the recipe for a vodka-and-tomato juice cocktail, known as the Bloody Mary at The St. Regis New York’s King Cole Bar. Originally christened the “Bloody Mary”, the cocktail was renamed the “Red Snapper” so as not to offend the hotel’s refined clientele. After more than 80 years, the iconic Bloody Mary remains the signature cocktail of the St. Regis. Each hotel and resort in the St. Regis portfolio has crafted its own unique, locally inspired interpretation.

Mezcal, the ancient spirit known as “god’s elixir,” traditionally consumed during rituals and celebrations in the pre-Columbian era, is the essence of the Sangrita María. Rooted in Mexican history, this libation also includes such local flavors as agave salt, spices and guajillo chile.

For chile pasilla purée, blend a pasilla pepper with a little water. Mix all of the ingredients in a tall 12 OZ / 1/3 L glass rimmed with agave salt. Garnish with the lemon wedge.

Death Becomes Them: Experiencing the Spiritual in Mexico and Peru

Where to Go Next: Los Cabos, Mexico