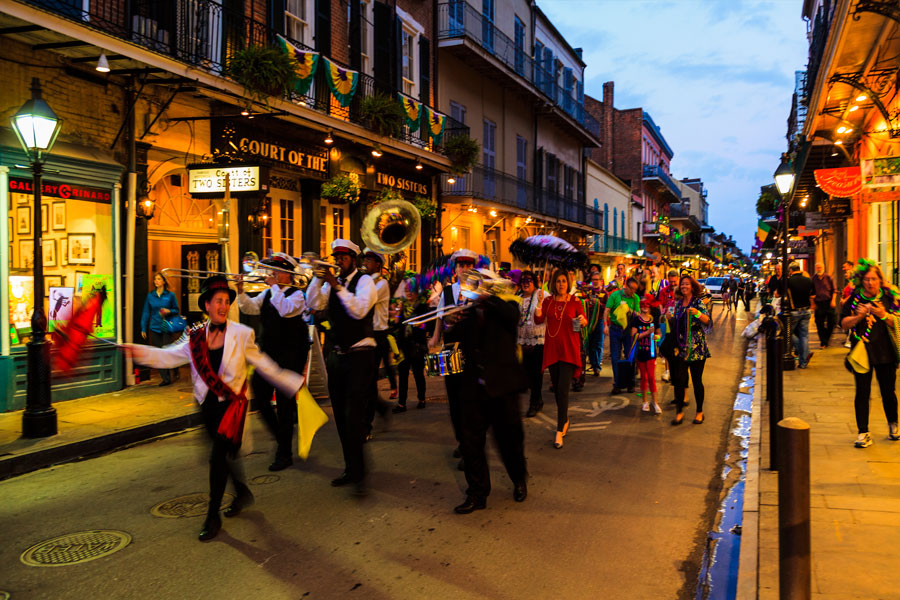 Tired of snow, slush and grey skies? Think parties, parades, dancing and feasts instead. If you’re looking for some festivity for this year’s Mardi Gras — or perhaps some inspiration for your own celebrations — here’s where to look.

If you’re thinking Mardi Gras, the French Quarter in New Orleans may be the first place that comes to mind. After all, the city’s parties, parades and Cajun flare are legendary.

However, it’s Mobile, Alabama that claims to be the first place in the U.S. to celebrate Mardi Gras — way back in 1703. Today, the celebrations are geared more towards family fun than other carnivals, and aim to be an event for all ages.

Many other cities through the U.S. also get in on the act, such as San Diego’s Mardi Gras in the Gaslamp Quarter, the Cajun Mardi Gras in Lafayette and Mardi Gras! Galveston in Texas. Carnaval Miami, lasting two weeks starting the Saturday before Ash Wednesday, is known as the biggest Hispanic festival in the U.S. Events include a golf tournament, a cooking competition and a grand finale street party.

Even cities you wouldn’t expect — like Seattle, Chicago and Philadelphia — have events. Readers tell us St. Louis puts on quite a show too!

Why not time that winter getaway to enjoy more than the beach? Many of these island nations celebrate Carnival, including the Cayman Islands, Jamaica, the French West Indies and the Virgin Islands (to name a few). Here you’ll find a mix of influences from Dutch, Spanish, French and English traditions combined with the music and culture you’d expect from the Caribbean, like steel drum bands.

Two of the best-known carnivals are in Aruba and Trinidad. In Aruba, the season starts in January with “warm-up” events like the Torch Parade. Daily events start in February, including the election of Mrs. Carnaval and the children’s parades. Carnival Monday, an official holiday, is the only break in the season and the day of rest comes just before the Grand Evening Parade. (See VisitAruba.com for the full schedule.)

In Trinidad’s capital, Port-of-Spain, the festival revolves around music and masquerade. The carnival officially starts on Monday with J’Ouvert — a pre-dawn party that has participants up before the sun at 4:00 am. Over the next two days, enjoy the music and costumes as bands and masqueraders compete for prizes and awards. When the party’s over, head to the beach and join the locals in dreaming about next year’s events. (See GoTrinidadandTobago.com for details.)

Mention of the famous carnival in Rio de Janeiro, Brazil is sure to conjure up images of feathers and sequins, samba music and sensual dance. The city hosts the largest celebrations in the country, and some even claim it’s the “Carnival Capital of the World”. However, it’s not the only notable celebration around. Salvador de Bahia is said to hold the world’s biggest street party, and neighbouring cities Recife and Olinda pair up for one of the best-known events in the country. However, people looking for a less frantic pace may want to visit one of the many small towns and cities that also mark the occasion.

And Brazil isn’t the only place to party. Catholic tradition is strong throughout Central and South America and several other countries like Peru, Columbia, Venezuela and Panama put on a show this time of year.

If you can’t get away during February, Forbes Traveler notes that La Ceiba, Honduras holds its carnival in May, and that’s also when Nicaragua holds its month-long carnival parties in Bluefield.

The idea of Mardi Gras was originally imported to the Americas by European settlers, and traditions are still strong in many countries across the continent. Regardless of where you are, carnival isn’t hard to find. Spain, Andorra, Croatia, Greece, Lithuania, Poland, the Netherlands, Hungary and Slovenia are just a few of the countries that celebrate the passage of winter into spring. Time your tour just right and you can experience carnival in more than just one place.

Italy offers a wide variety of events, from motorcycle parades to downhill skiing, across the country. One of the oldest and grandest festivals is the Venice Carnival. The romance of the city is a natural backdrop for grand balls and parties — but costumes are a must!

Germany, as well as Austria and parts of Switzerland, celebrate Fastnacht, a five-day festival. One of the most notable Rhineland celebrations is in Cologne, with revelry that includes parades and costumes. Keep your eye out for the Prince, the Peasant and the Virgin — the celebration’s traditional figures – among the many characters in traditional dress. You won’t want to miss the popular Rose Monday Parade, but you’ll have to arrive early to get a good place. Events are ongoing throughout the city each evening, and closing time at pubs is even suspended for the duration of the carnival.

Asia and the Pacific

You might not expect to find Hindu traditions in a Christian celebration, but that’s part of what makes the Goa Carnival in India so unique. The event draws on the area’s Portuguese history, and starts off with a parade in Panaji on the Saturday before Lent. Four days of parties, parades and events draws to a close with the famous Red-and-Black Dance at the Clube Nacional in Panjim on Tuesday night. (See Goa Tourism for more information.)

For an inclusive environment, try Sydney, Australia’s Gay & Lesbian Mardi Gras.The event, which raises awareness about gay rights issues, starts around Valentine’s Day and continues for several weeks of arts and entertainment events (in addition to theme parties and parades). One of the highlights of the celebrations is the Gay & Lesbian Mardi Gras Parade, rumoured to be the largest parade of its kind in the world. (See the event website for details.)

– Expect to pay a little more. Prices for food and accommodation may be higher than normal, especially in cities where large celebrations are held. Travel experts note that smaller towns may be a better bargain.

– Exercise caution. Pick-pocketing and other crimes typically increase during holidays, and criminals look for large crowds and people who have been drinking. Avoid taking unnecessarily risks — like walking alone at night.

– Be aware of local customs. Not every day is a party day, so keep your activities in line with the locals and be sensitive to fasting and prayer customs. Also, be aware that in recent years police in certain areas have been cracking down on nudity, flashing and public drunkenness.

And above all else: Participate! Carnival is not a spectator event. Don’t the let the parade pass you by — dress up, and get up and dance!