Of Celts and Clans: Exploring Ireland’s Traditions, History and Music 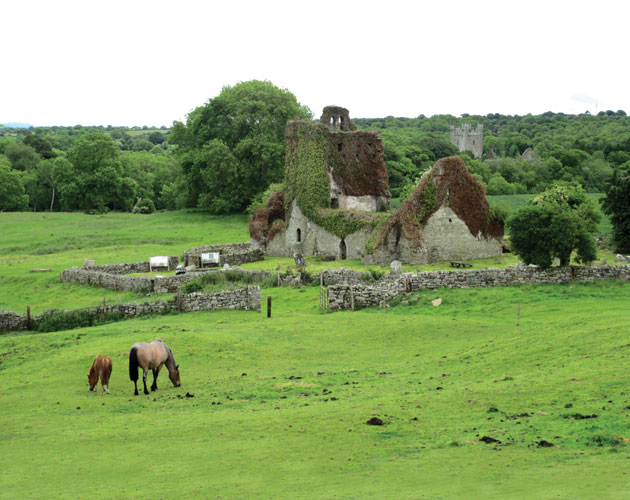 A young lad, no more than 17, is dancing in the near dark. He kicks his last high step and, in the same motion, sweeps up a banjo and joins in the band. His fellow players, including his uncle, are decades older and, yet, there’s a deep connection to the folksy historic songs they sing.

Their voices soar, belying their location, deep in the earth; the caves beneath the Medieval Museum in County Waterford, Ireland, just a few hours south of Dublin, where the past runs just as deep and the stories shared through harmony and melody are as thick as blood.

In Ireland, family, tradition and storytelling through verse (think James Joyce and William Butler Yeats) or through song (think James Galway, The Chieftains, U2 and, of course, the Canadian band made up of Erin immigrants, the Irish Rovers) are woven into a being’s fabric.

In the Waterford museum’s basement, Richard Murray’s band An Emigrant’s Tale strums into “Far From Home,” a song about the famine ships that made the crossing to Canada. Some 250,000 people left Ireland for our shores during the Great Famine of the 1840s and, in the song, there’s mention of the burial grounds at Grosse Isle, Quebec, the port where the ships would land, waiting for entry into the country. Many, unfortunately, would end up in those burial grounds before ever stepping foot on dry land.

In New Ross, in nearby County Wexford, the Dunbrody is a to-scale replica of a famine ship that was built in Quebec, docked just down the quay from the John F. Kennedy memorial. The business-savvy New Worlders would bring timber and cotton from North America and, in return, would take people desperate to escape the famine.

The ships, of course, were built for cargo, and conditions were harsh for mere mortals. The Dunbrody could carry about 200 people, who would be given one week’s ration of ships’ biscuits. As for the rest, you’d be expected to cook for yourself in cramped below-ships barracks-like quarters.

Perhaps the Irish affinity for Eastern Canada is a reason why hurling is still played in Newfoundland and some parts of Ontario. Argued as the origin of ice hockey, the game is played on a field with a “sliotar” and a “hurley” (the ball and the stick).

In fact, in 1845, civic leaders put a stop to hurling played in the narrow streets of Quebec City – the precursor, possibly, to so many pickup street hockey games across our nation. The hotspot for hurling in Ireland is Kilkenny City in County Kilkenny, and P.J., of The Kilkenny Way Hurling Experience, will happily share his game knowledge – look for him at Lanigan’s Bar in Rose Inn Street.

Ireland is also the domain of saints.

One in particular, St. Patrick, is revered here: the primary patron saint of the Emerald Isle. But in County Kilkenny lies the tomb of St. Nicholas, a saint revered round the world by the young and the young at heart. It’s said that during the Crusades, a pair of knights, who were also brothers, learned that the jolly old Nick’s remains were somewhere in the Middle East. Bound and determined, they found his relic, not in the Middle East, but in Bari, Italy, and brought it here, just outside Thomastown to Jerpoint Park.

It wasn’t until the early 21st century, however, that the tomb was rediscovered. Joe and Maeve O’Connell, the owners of the land on which it lies, had opted out of corporate life and were looking for a reinvention. Joe saw the For Sale sign at the front of the 131-acre property, went to auction and won the bid.

What he got: stretches of badly overgrown weeds, grasses, wild flora, so deep that, at one point, clean-up crews unearthed a fully grown tree.

But there was something else: a lost town from the 12th century, ancient stone walls thick with ivy and moss that formed a chapel and a stone tomb effigy carved with the image of St. Nick flanked by his two knights. After much excavation, the area was opened to the public in 2011, and the rest, as they say, is history, or as Joe and Maeve do, history in the making.

Joe’s an angler – trout leap from the clear waters of the River Nore that runs through his land – and Maeve is a proponent of local farm-to-table dining. Their tea rooms and artisanal lunch menus make Jerpoint Park a popular spot for tours to take a breather and to make the pilgrimage to the old town’s ruins just down the hill from Belmore, the main house.

Joe’s love of tradition extends to his dogs, including Percy (who has his own blog), and they entertain guests with the art of herding, where man and dog work as one with little more than a whisper and a hand signal from the master to keep the geese in a row. White geese, black and white border collie, Joe’s imposing figure, all against a backdrop of the most incredible green.

Yes, the Emerald Isle is as verdant as its nickname implies. Visually breathtaking yet so simply elegant. A simplicity and elegance connects much of Ireland’s art with its tradition and back in Waterford City, where namesake wares are created at the House of Waterford Crystal and 60,000 pieces are still produced a year (other European countries, such as Slovenia, also make crystal for Waterford).

It’s on the tables of the rich and famous and still on many a wedding registry list to this day. One of the only crystal-making companies left that still employs mould-makers, Waterford’s artists start the process with beech and pear wood before the sensual, light-catching curves take shape. It requires eight years to learn how to blow the crystal, a near-circus fire-breathing act that turns a molten globe into a vase.

Sculptors also work their magic but, rather than hammer and chisel, a wheel is used to give form, while engraving is via intaglio, or in reverse: rather than just cutting into the glass, the patterns are traced on to the crystal and the engraver works by hand, making every piece ever so slightly unique. A factory tour reveals everything from items for the Queen’s Jubilee to awards for Justin Timberlake’s celebrity golf tourney. It’s nothing short of magical: sparkling vessels of dancing refracting light.

All this craft can make an outsider seek a way in. Enter Helen McLoughlin, master performer and a teacher of playing the bodhrán, a traditional hand-held Irish drum, for the Bodhrán Experience. The lesson is held in that most sacred of institutions – the Irish pub.

In the back of The Sky and The Ground in County Wexford’s Wexford Town, it’s all about timing, a loose wrist, a few swigs of the local brew – and laughter. Helen, a cheeky optimist who spellbinds with her playing, reveals that she sometimes uses bodhráns made by the gifted hands of David Settles of Davey Drums in Calgary.

It’s this same brand of magic that makes what 17-year-old Richard Murray does, dancing that traditional Irish dance in the near dark below the museum, so inspiring, and it leaves one wanting more of this living history. His past may inform his future, but it goes beyond music and tradition. Murray must leave as soon as he’s done. It seems he’s got an exam he must study for, for entrance to college. Let’s hope Irish luck – and a bit of that magic – is with him.

A version of this story was originally published on March 5, 2018