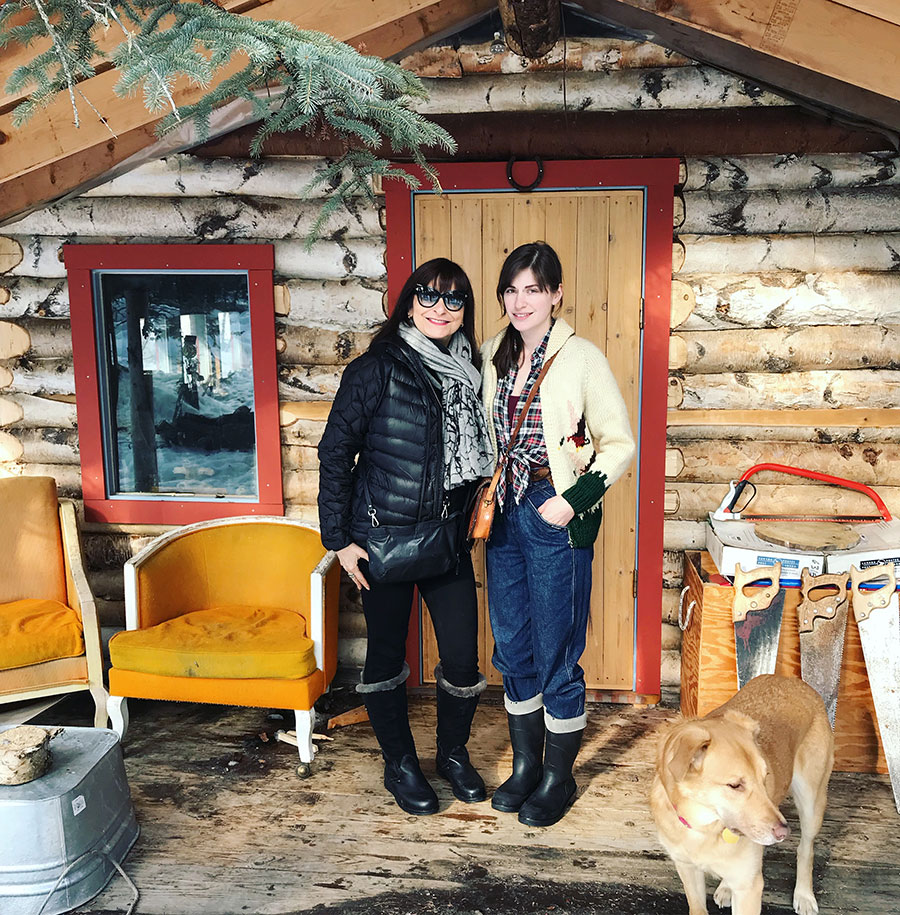 The author, Jeanne Beker posing with her daughter in front of her cabin in The Yukon. Photo: Courtesy of Jeanne Beker

Looking back on her own peripatetic youth, Jeanne Beker applauds her daughter for forging her own path in the Far North.

I’ve been thinking a lot about the way I want my daughters to remember me. My mother occupies a sacred and sizable spot in my memory: her words of wisdom echo constantly, both cautioning and cheering me on. And considering how crazy-making some of my lifestyle choices may have been for her, I’ll be forever grateful not only for all her encouragement, but also for her faith in me and acceptance of the dreams I needed to pursue.

It’s this kind of motherly love I’m focused on as I embark on my fourth two-day trek to the wilds of the Yukon to visit my youngest daughter Joey O’Neil — a gentle, poetic and gorgeous young woman who decided to abandon the urban jungle of Toronto and the comfort of our home for an off-the-grid lifestyle in the Far North. While it may have been a blatant rejection of the chic, image-conscious world I’d exposed her to, I chose to see Joey’s brave move as a quest to blaze her own trails – something I’d always encouraged both my girls to do. In 2012, armed with one vintage suitcase, an old steamer trunk, portable sewing machine, record player and guitar, Joey boarded a westbound train. And the odyssey began.

She was supposed to stay for a year, studying at the Yukon School of Visual Arts in Dawson City before she’d come back to Toronto to attend the Ontario College of Art and Design University. But when that first year wrapped, Joey called to say she’d decided to pursue music, rather than visual arts, and school was no longer in the cards. She’d fallen in love with the close-knit community and wanted to spend at least one more year living in tiny off-grid West Dawson on the other side of the Yukon River. Joey had found the perfect two-room log cabin and, with a new puppy and a job in town at an old-timey photo parlour, she’d be able to spend a lot of time writing songs and honing her musical skills, even through the long, dark, cold winter. For now, this was exactly where she wanted to be. I was at once inspired and horrified: I’d urged my kids to dream big and be fearless. But did she have to dream quite that big? Or be quite that fearless?

Perhaps the apple doesn’t fall far from the tree. My mother never approved of my display of wild abandon back in 1969 when I brazenly jumped on stage at the first Toronto Pop Festival to boogie my brains out with Ronnie Hawkins. Then, determined to spread my wings as a young grande artiste in the early ’70s, I boarded a bus for New York City with little more than a few hundred dollars and a whole lot of ambition. My mother was not happy about her baby leaving the nest for the wilds of Manhattan. But she bit the bullet, stoically sewing my hard-earned cash into the seat of my panties, just as her mother had done for her when she first left her small Polish shtetl to go off to school in the big city. But she’d always encouraged me to follow my dreams, so how could she argue?

A couple of years later, I made my first Atlantic crossing, to study the art of mime in Paris. Again, my poor mum had no say in the matter. Two years later, I took off again for what some considered the final frontier: glorious Newfoundland. Again, my parents had little say in the matter. Within a few weeks, as Newfoundland’s only resident mime, I ironically managed to land a full-time gig at CBC Radio. My mother was proud. But while she understood what it was about the Rock that had captivated me, she was elated when I finally made it back home to Toronto.

While my beautiful older daughter, Bekky O’Neil, a multimedia artist and animator, settled down on the family farm about three years ago, just a sweet 15-minute drive from our country home, it’s been seven long years since my younger daughter, Joey, moved all the way to the Yukon. I’d be lying if I said it hasn’t been an emotional roller-coaster for me. As a single mum, without Joey’s dad by my side to help quell my fears and put things in perspective, it’s been particularly trying. My mum’s famously scary advice – “Expect the worst and you’ll never be disappointed” – has prompted more than a few anxious days, especially during those dark winter months. I can’t tell you how many times I’ve imagined my girl falling through cracks in the ice or being chased by bears or trampled by dogsleds or lost in the forest or just being painfully alone and lonely. So instead of obsessively fretting over the possible perils she may be dealing with, I try to keep focused on the good stuff she’s potentially experiencing – the magnificent vistas, the closeness of her tiny community, the peace and quiet of her surroundings, the unbridled joy of being on this grand, seemingly endless adventure.

Joey has been very good about coming home to see the family. I know it’s a huge schlep, especially when she drives out here – a drive that usually takes her up to 10 days – and I so appreciate that I do get to see her at least three times a year. But making the trying trip out west to visit Joey in her self-proclaimed paradise has been especially important. It helps me demystify her living situation and understand exactly what it is that has captured her heart. I’ve made the trip four times now. It’s two days of travel each way – a flight from Toronto to Whitehorse, an overnight in Whitehorse, then another flight to Dawson City. But I’m forever grateful that Joey has put down roots in our brilliant Canada, appreciating this fair land for all its natural beauty and meaningful culture.

The first realization about what whetted Joey’s appetite for a life so far away from home hit me the very first day I arrived in Dawson in 2013. Strolling through the picturesque, rustic little town with my daughter and running into many of the lovely locals, I became acutely aware that any celebrity status I’d ever entertained in other parts of this country had suddenly dissipated. Happily, I was seen as “Joey’s mother,” and I was proud to lap up all the accolades people were lavishing on my girl. Joey had found her place in this warm and wonderful community on her own sweet terms, and everybody had embraced her on her own merits.

My trips to see Joey have provided me with a banquet of recollections to feast on, especially when I hunger for the comfort of my baby’s company. Each time I walk through the door of her tiny cabin, I’m awed by her romantic vision and marvel at the carefully chosen art and accoutrements that decorate her magical, humble space. And what can compare to the two of us canoeing down the Klondike? Or dancing late into the night at the Pit? Or posing together for old-timey pictures at Peabody’s Photo Parlour where she works?

Playing pool with my girl at the Downtown Hotel was another highlight, along with going fishing at the confluence of the Klondike and Yukon Rivers, pigging out on Greek food at the Drunken Goat and taking part in Trivia Night at Bombay Peggy’s. I savour the memories of cooking a simple spaghetti dinner and watching old movies on a big white sheet she’d strung up in her living room. I practically laugh out loud when I think about the time we furiously tried to beat the clock and start a fire in the annual Thaw di Gras Festival tea-making competition.

Driving around in Joey’s rusty old Jeep and crisscrossing the Yukon River on the ferry between Dawson City and West Dawson has also provided a kind of joy – especially when I focus on the doily that graces Joey’s dashboard. My mum crocheted that little doily decades ago, and it’s become a token of protection, likely bringing untold comfort to Joey on all her adventurous drives. It also makes it feel as though my mum is always in the car with us. The drive we made to Tombstone National Park took my breath away. The incomparable grandeur of that magnificent place helped explain how this land had seduced my precious daughter. I admit I, too, have fallen under the Yukon’s legendary spell. If I were 40 years younger, I’d want to live out there in a romantic log cabin, too.

On my most recent trip last summer Joey took me to visit Beth Chaim, or House of Life, the century-old Jewish cemetery on a hill overlooking Dawson City. The few gravestones there seemed ancient, with most of the engraved words barely legible. The yard was quite neglected; not too many people likely visit this remote spot. Joey suggested we place a couple of little stones atop the gravestones, just like we do when we visit the cemetery where my parents are buried: it’s a traditional custom that marks visits and illustrates a sense of solidity and endurance. We spent a few moments in silence, contemplating those early settlers buried in that little yard, who’d come from a culture and society so different than what they found in the Yukon. I tried to imagine what my mother would have made of all this – my mum, who’d survived the horrors of the Holocaust and courageously picked up the pieces to come to a new land and start a new life. What would she think if she could see her granddaughter now, living this large life, honouring the legacy of her own brave and adventurous spirit?

I think back to the last Passover Seder I hosted for mum, just weeks before she died. Due to the ravages of Parkinson’s disease, she barely spoke. But she was excited that we were going to Skype with Joey.

As the candlelit interior of that distant cabin came into view, I watched as my wide-eyed 94-year-old mother, wowed by this technology, drank in the sight of her beautiful granddaughter. I selfishly wished mum would say something to Joey about coming home, plead with her to get back to her family where she belonged. At that point, Joey had already been living in the Yukon for three years. But instead, she only said one thing. “Joey … are you happy?”
“Yes, Baba” replied Joey, without skipping a beat. “I’m happy.”

Editor’s Note: This story was originally published before the lockdown due to the COVID-19 pandemic

Ticket to Ride: Back in the Saddle and Back to Nature in the Yukon

Make It Eco-Friendly: An Unforgettable Multi-Generational Journey to Antigua