Belle on Wheels: Discovering a Love for Biking on a Spin Through Denmark 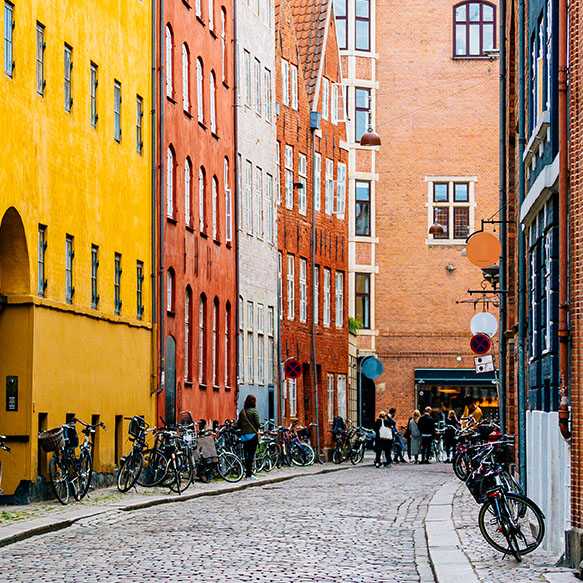 You never forget how to ride a bike, but on a cycling tour of Denmark with her family, Katherine Ashenburg discovers a late blooming love for adventure on two wheels. Photo: Alexander Spatari/Getty Images

Though COVID restrictions are still in place, we can travel vicariously through our contributors who share stories of how their (pre-pandemic) journeys uplifted them and, in some cases, even transformed their lives. Here, after injury — and not having rode a bike in more than 30 years — writer Katherine Ashenburg travels through Denmark on two wheels with the kids and grandkids.

Until last spring, I hadn’t been on a bicycle for 34 years. So, when my daughter invited me on a family biking trip in Denmark, I can’t say I leaped at the chance. I’m 74, my shoulder was broken in a fall last year and my idea of a great holiday involves art galleries and restaurants, not biking 30 kilometres a day through forests, beaches and fishing villages. On the other hand, what an unrivalled opportunity to spend a different kind of time with my grandchildren as well as with my own body.

I said a conditional yes – very conditional. I had never biked 30 kilometres a day in my prime, so getting up to speed was going to be a challenge. Borrowing a friend’s bike for my maiden outing, I refused to let her watch me mount it. “I’ll just take it down to the schoolyard on the corner,” I said airily. I managed to get up, very shakily, and for the next few weeks I pedalled around the school’s running track, often with five-year-olds who were learning to ride.

I had lived more than three score and 10 years without any knowledge of biking shorts, but now it was time to buy a pair. Biking shorts are a thing unto themselves, undeniably repulsive but helpful. Inside the Lycra exterior, around the perineum, is a thickly padded section that alleviates the discomfort of sitting on a bicycle seat for hours. The man in the bike shop told me I must never wear any underwear with them, which sounded kinky, but I took all advice seriously. (Wearing undies apparently negates the friction-control and moisture-wicking benefits of biking shorts.)

Now renting Toronto’s City Bikes, I began riding longer distances on the Waterfront Trail, edging as far away from the cars as I could, but loving the feeling of balancing on two wheels while I created my own breeze. Most of my friends assumed I would rent an electric bike in Denmark, but I resisted. Lumbering the elegant simplicity of a bicycle with a motor sounded like putting an engine in a canoe. Finally, still anxious, I bought my ticket to Denmark.

Marshalling our bikes in front of our Copenhagen hotel, we are a party of eight, with a spread of 65 years, ranging from nine to 74 (me). Aside from my daughter and son-in-law, in their mid-40s and their children aged 15, 13 and nine, it includes my son-in-law’s 15-year-old nephew, a friend of my daughter’s in her late 50s and me. The company we have signed up with provides hotels, bikes and a route through Denmark’s North Zealand area on paper and GPS or phone; every morning, they transport our luggage to that night’s hotel. No guiding, no hand-holding, no “sag wagon” where weary cyclists can rest. We are on our own.

The good thing about biking in Denmark is that it is usually flat. The less-good thing is that it rains quite a bit. On Day 1, we have sun, rain, blue skies, black clouds – a mixed menu that repeats every day. I had been dreading the ride out of Copenhagen, and it is as nerve-wracking as I feared. Finally, after about an hour of city traffic, we are in the country, with the Oresund, the strait between Denmark and Sweden, on one side. Leaving the sea, we duck into the royal hunting forest for a long stretch, pedalling past ancient trees, mildly interested deer and a moose with antlers the size of our bicycles.

On Day 1, I also realize why I had enjoyed my Toronto “training” so much. I had been gliding along at the stately pace of a dowager empress, but what’s wanted now is chewing up more kilometres an hour – working harder and, at least at the start, enjoying it less. My 15-year-old granddaughter, Kate, shows me that I need to pump in a higher gear, maybe a six instead of a three, and each turn of the pedal will push me further. I hate the thought that I’m holding them up; it’s humbling.

Added to that is my worry about falling. And sure enough, on a fairly steep decline, trying to avoid an oncoming cyclist on a narrow path, my bike and I part company, and I fall against a concrete wall under a bridge. A nice Danish man on the trail wants to help – my family is far ahead and unaware of my fall – but I insist I’m fine. He indicates my bike, which has been less fortunate. Right – I do need his help. He realigns my handlebars and front wheel into a better relationship, and I carry on.

Finally, 36 kilometres from our Copenhagen hotel, we reach our destination, which is, deservedly, a castle – a small-scale, 18th-century Danish one with a stepped gable – converted to a hotel. Over a dish of pasta, I am ready for a new level of bonding with my grandchildren. Except that the posse of boys, two grandsons and their cousin has been granted special permission to read novels on their e-readers during dinners. As my daughter says, you can’t not love boys lost in their books, but that leaves no room for Nana. At one point, I say to Finn, aged nine, “I still love you.” Gently, without taking his eyes off his Kobo, he moves my hand from his arm.

His sister, Kate, my roommate, is another story. A mine of information about important topics such as unruly eyebrows (discipline them with lip pomade or hair spray), she vets my wardrobe and my vocabulary. When I complain about the ugliness of my Day-Glo yellow helmet, biking shorts and aggressive running shoes, she tells me I can’t be “super-fly” while cycling, then warns me not to use that word, which is new to me but already passé. The traditional “cool” would be better. We joke a lot and have a week-long pajama party.

I have been looking forward to Day 2, which is an easy 20-kilometre ride with seductive attractions along the way. The first is the house of Isak Dinesen, the author of Out of Africa; the second is Denmark’s premier modern art gallery, Louisiana, and the third is the M/S Maritime Museum of Denmark in our destination town, Helsingor. Over breakfast, to my surprise, it becomes clear that support for the Dinesen option is muted – okay, it is non-existent except for me – and there is a robust faction in favour of the maritime museum, of all things.

Before I left Toronto, a friend who is an experienced grandmother, mother-in-law and mother, advised me, “Say as little as possible.” This is a path almost as difficult for me to follow as the rougher cycling trails, but I’m trying. I stifle the whiny thought that I will go to my grave not having seen Isak Dinesen’s house and look forward to Louisiana, which did make the cut.

We pedal in persistent rain, diverting from the coast into villages where the houses have immaculate thatched roofs. The tradeoff in the villages is that although they are quiet, they rarely have bike paths, but my willingness to share the road with a car or two is growing. I would like to say that the kids fell in love with contemporary art at Louisiana. But with the possible exception of Finn, they trudge dutifully through some stunning rooms and an outdoor sculpture garden. I am learning that you can lead your grandchildren to culture but you cannot make them enjoy it.

Our route for Day 3 takes us to Sweden, a 22-minute ferry ride across the Oresund, followed by a 35-kilometre circuit through beaches and forests. But the kids stage a successful coup d’etat against so much biking: we will cycle as much as we want in Sweden, without being tied to the whole route. I take no part in the coup (“Say as little as possible”) but I am grateful for the outcome.

By now we have a routine. I ride second to last in our train, and my daughter’s friend tactfully takes up the rear, I suspect to make sure I am all right. We stop at a grocery mid-day and buy a picnic of bread, cheese, ham, drinks and chocolate. Today’s picnic is on a beach worthy of Ingmar Bergman. While the hardiest of us brave in-and-out dips in the bone-chilling sea, an elderly woman in a red bathing suit paddles around in the water as if it were the Mediterranean. I apologize to her for the boys’ rowdiness, and she says, “That’s nothing. I had four brothers.” Then she wraps a terry cloth robe over her suit, mounts her doughty bicycle and rides into town. That’s the kind of old age I want.

Day 4 looks formidable, with a rise in elevation of 310 metres, three times higher than usual. The hills aren’t getting any easier, and I decide if you can’t take a day off at 74, when can you? A cab drives my bike and me to our next destination, Hillerod, where I spend the day at Frederiksborg Castle’s history museum. Yesterday, when some of us wanted to visit Helsingor’s castle, Kate had complained, “Nana is going to spend 20 minutes looking at a candelabra.” I don’t think any candelabra in Frederiksborg kept me rapt for 20 minutes, but it’s pleasant not worrying about bored fellow travellers.

The final day begins with wetlands and country lanes lined with tansy and goldenrod. Our last picnic is lavish, and my son-in-law takes a picture of eight triumphant cyclists. Even the ride back through Copenhagen is less scary than I remembered, and I conclude I have gained some confidence.

I am left with memories – my grandson John and his cousin Duncan weaving in and out of the slower riders, Kate and her mother looking like sisters on their bikes, Finn and I walking our bikes up the hills in companionable silence. But there is a future, too. Europe has lots of scenic flat stretches for biking – in Friesland, for example, or Flanders or along the Danube.

Happily, I have the winter to decide on my next adventure.

Exploring the Great Houses and Halls of “The Crown”