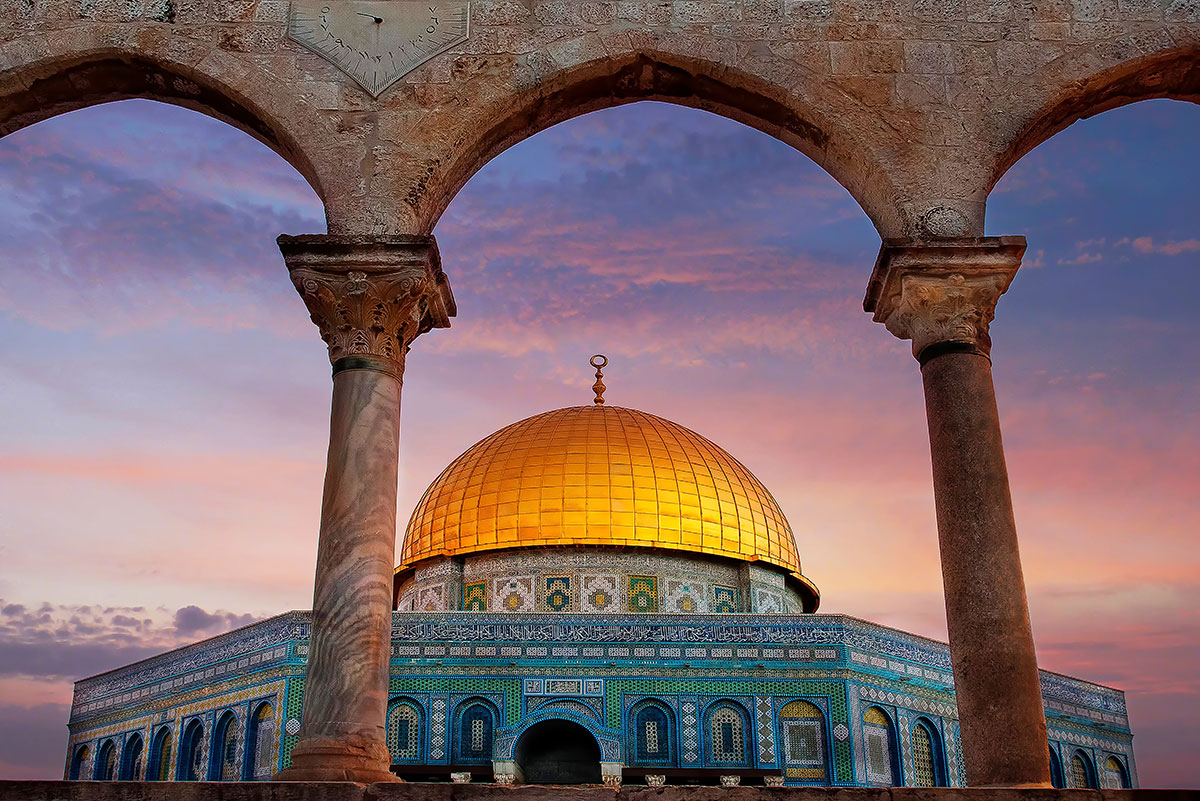 As the pandemic restricts tourism in Israel, take a virtual tour of the many historical sights in Jerusalem, including the al-Aqsa Mosque and the Dome of the Rock pictured above. Photo: Nick Brundle Photography/Getty Images

With pandemic travel restrictions still in place, travel to the sacred sites of Jerusalem and the Holy Land from the safety and comfort from home, with stops at the Church of the Holy Sepulcher, the Western Wall, Old City markets, Mount of Olives and much more.

The Old City of Jerusalem is a living testament to cultural diversity and faith. As the heart and capital of the State of Israel, it is also the See of a Greek Orthodox, an Armenian and a Roman Catholic patriarch as well as an Anglican bishop. Revered by Christians, Muslims and Jews alike, Jerusalem is the site of Christ’s passion, the place from which Mohammed ascended into heaven and the city of the Temple of David and Solomon. The Old City core — declared a UNESCO World Heritage Site — is a labyrinth of ancient paths and archeological sites tucked with holy places that are sacred in unique ways to each of the three monotheistic faiths.

Jerusalem sits on the ridge of the Judean Mountains, overlooking the Judean Desert. The Mount of Olives is a scenic starting point for a panoramic perspective of the Old City, a visual sense of its ancient structures layered over centuries of time and its sonic appeal to the people who cherish Jerusalem as their Eternal City. As the air above echoes with ringing church bells and calls of the muezzin, the scene below is a vast swath of white stone graves scattered with Jews at prayer. Beyond are glorious views of the Old City ramparts, the Tower of David and the golden Dome of the Rock.

Gates in the Old City ramparts open to a maze of winding streets, their cobblestones polished by the footsteps of biblical times.

Christian pilgrims may choose to enter at Damascus Gate or through St. Stephen’s Gate (also called Lion’s Gate) after visiting the Garden of Gethsemane, where it is believed Jesus spent the night before he was arrested. Both gates lead to the Via Dolorosa (or Way of Sorrows), the path Jesus trod on the way to his crucifixion. Pilgrims who feel focused on savouring the spiritual essence of Jesus’ tribulations typically tread in his footsteps with heartfelt devotion, stopping at every Station of the Cross en route to his final burial place in the Church of the Holy Sepulchre.

The holiest place in Christendom, the Church of the Holy Sepulchre can be overwhelming by its sheer presence, its ancient stone gleaming gold in sunlight. Faithful visitors jostle in the rotunda to touch the Stone of Unction (the slab where Christ’s body was placed and anointed prior to entombment) and to enter the burial tomb from which Christ is believed to have risen to heaven more than 2,000 years ago.

Leisure visitors tend to linger along the Via Dolorosa to bargain with Arab vendors or to stop for lunch or a coffee-and-strudel break at the Austrian Hospice Café Meinl. From here, an easy climb up steps leads to the rooftop and an awesome view of the Temple Mount, the Al-Aqsa Mosque and the Dome of the Rock, constructed in AD 691. This rooftop atmosphere has a spectacular aura at certain times of day, when the church bells chime simultaneously as the Muslim calls to prayers. After descending to the street, a short walk through the Arab quarter leads to the steps of the Temple Mount.

A broad plateau with scenic views, the Temple Mount is sacred to all three religions. In Old and New Testaments, it is also known as Mount Moriah, the site where God tested Abraham with the binding and sacrifice of Isaac. According to the Koran, it is where Mohammed ascended to heaven and is known in Arabic as Haram esh Sharif or the Noble Sanctuary. Muslims typically refer to Jerusalem as Al-Quds.

The Jaffa Gate connects new Jerusalem to the Old City and leads in various ways to the Christian, Muslim, Armenian and Jewish quarters.

For all its images and televised views, the square of the Western Wall (or Kotel in Hebrew) is humbling at first impression for the jumble of humanity mingling about, celebrating life events or praying against its colossal stones, with men and women separated by a high partition. Hallowed as the holiest site in Judaism, the Western Wall is the sole remnant of the Second Temple built by King Herod and destroyed in AD 70. (The First Temple, built in 1000 BC by King Solomon in the years after King David conquered Jerusalem, was destroyed in 586 BC.) People from around the world vie to touch the walls or tuck a note written with prayers or wishes into the wall’s stone crevices, believing their message will rise swiftly to God.

Touching the Western Wall arouses heartfelt emotions. Exploring the Western Wall Tunnels within the foundation evokes the sensation of walking through 3,000 years of underground history. A guided tour of the narrow tunnels gives insight to the incredible architectural ingenuity of King Herod’s era. For all its wonder, this tour is for the sure-footed as the tunnel floors may be damp and slippery.

The Citadel and Tower of David, also built by King Herod, are stunning archeological sites by day. On certain evenings, a brilliant sound and light show gives the tower’s ancient walls celestial status as virtual characters play out biblical stories amid the night stars.

Beyond the Old City gates, new Jerusalem abounds with fascinating sites and places worth experiencing before venturing forth on the trail of Jesus. For history and culture buffs, the Israel Museum houses the Shrine of the Book and Dead Sea Scrolls found at Qumran in 1947. Step outside the museum to the Billy Rose Sculpture Garden for a stroll among massive artworks and amazing views. As the sun crosses the sky, Jerusalem may appear white or bathed in gold. Set on the hills of Har Hazikaron, Yad Vashem is Israel’s national memorial to the victims of the Holocaust, with commemorations to kind-hearted people known as the Righteous Among Nations.

A lovely suburb of Jerusalem, Ein Karem is home to the Church of St. John the Baptist, the Church of the Visitation and the small fount named Mary’s Well.

From Jerusalem, it’s a short drive to Bethlehem, Jesus’ birthplace. In Manger Square, the Church of the Nativity, built over the revered site of the manger, is the Holy Land’s oldest church. As Bethlehem is under the jurisdiction of the Palestinian authority, it’s best to check in advance if special arrangements are required for your timing.

Israel is scattered with numerous Christian biblical sites. These are among the most meaningful and accessible to independent and group travellers.

En route to the Sea of Galilee, Mount Tabor is believed to be the site of Jesus’ Transfiguration. Nazareth, the holy city of Jesus’ childhood, mixes the profound and the touristy. Outside the holy sanctuary of the Church of St. Joseph, huddled with women in kerchiefs lighting candles, Nazareth’s streets are clustered with souvenir shops, eateries and small hotels.

Moving on, pilgrims head to Tiberius (one of Judaism’s four holy cities) and cross the Sea of Galilee to ancient Capernaum. Here, the remains of a third-century Byzantine synagogue is believed to be the site where Jesus preached. Nearby stand the archeological remnants of the House of St. Peter. From here, an uphill walk to the Mount of Beatitudes, where Jesus delivered his famous Sermon on the Mount, rewards walkers with beautiful views of the Sea of Galilee. On to Tabgha, where Jesus performed the Miracle of the Multiplication of the Loaves and Fishes.

Aside from religious sites, the Sea of Galilee Boat Museum is worth visiting to see the ancient fishing boat that was discovered when the sea’s water level shrank. Archeologists believe it dates to the time of Jesus.

IF YOU GO: Tips for touring the Holy Land once travel restrictions are lifted

In spite of its tiny size, Israel is a country of diverse climates. April to October are sunny and warm. Winter months from November to March can be cold or rainy. So warm layers, rain gear, hat and sunglasses are useful.

Sturdy shoes are essential for the uneven cobblestones of Old City Jerusalem. A walking cane or collapsible cane/seat is useful for those who prefer to rest during the tour guide’s explanation of a site. A wheelchair ramp allows access to the square of the Church of the Holy Sepulchre.

The Palestinian authority has jurisdiction of certain sites, including the Temple Mount, Bethlehem and Jericho. Visiting these sites may require advance arrangements, which may include a guide and transportation.