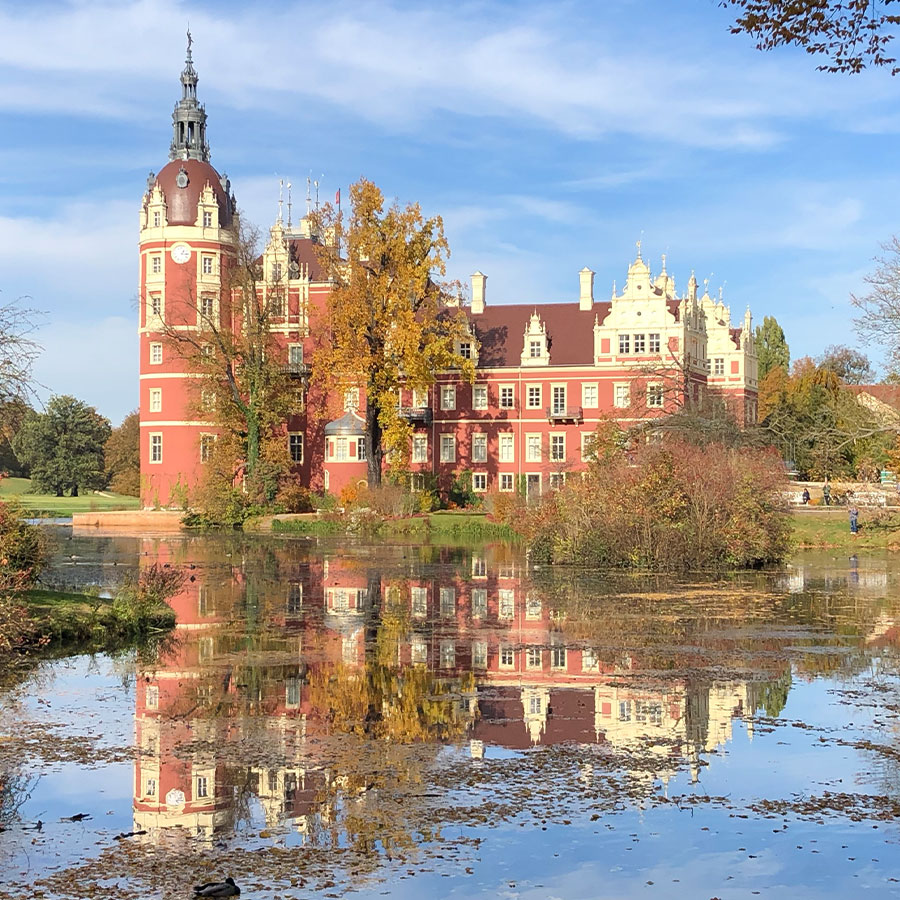 Travel writer Toby Saltzman says her expectations of Saxony, Germany, as dull and grim — informed by previous visits — were entirely refreshed on a recent trip to the East German state. Photo: Toby Saltzman

Of all my inherited possessions, the mother-of-pearl opera glasses tucked in my cabinet are a precious symbol of the lives my parents once lived, the culture they once loved. As long as I remember, these small, brass-framed glasses embodied a surreal power, luring me to places that my parents likely visited in the fine times, before everything changed in Eastern Europe.

Like other children of Holocaust survivors who seldom spoke of the terrors they endured, I never quite grasped the inconsistencies in my parents’ stories when they spoke of good times between sad. Yes, I understood their silent pains of family lost, times incarcerated. No, I never comprehended how their moments of happy reflection — on the “before” days, enhanced by concerts and promenades in the park — transcended their realities of gloom. Though I couldn’t fathom what they had endured, I came to realize that both my mother and father — each in their own way — had created caches of sweet mental bubbles to lighten their souls.

Years ago — just after the wall fell between East and West Germany — I was wary to tell my parents that I was leaving to explore the haunts of their past. I’ll never forget my mother’s spontaneous reaction in Yiddish. “Gey gezunterheyt, go in good health.” After a quiet pause, she added in whispering tones. “Go. See everything. You can’t blame children for the sins of their parents.” I wasn’t sure if that was a blessing to go, or an order to witness.

Just a few weeks ago — years since my first and subsequent visits — those words were resonating in my mind as I prepared to return to Germany. On previous visits, I had seen how Germany acknowledged its Holocaust history in museums, monuments and plaques scattered across the country. This time, I was visiting Saxony, the state in eastern Germany, called the German Democratic Republic (GDR) from 1949 to 1990. I was motivated to return by the country’s celebrations of centuries of Jewish culture, now epitomized by the newly restored Grand Synagogue of Gorlitz, the only synagogue in Saxony to survive the Kristallnacht destruction of November 1938.

For a historical perspective, it’s worth noting that before the Second World War, Saxony was Germany’s strongest, most prosperous region. Dresden was the country’s richest and most beautiful city. Cosmopolitan Leipzig was a European centre of commerce and music. The medieval city of Gorlitz — originally the splendid centre of Prussian Upper Lusatia — was the commercial trading core that vied Dresden with an esprit of arts, theatre and craftsmanship.

After arriving from Berlin in the indigo of night, Dresden was a magical sight, its distinctive skyline illuminated and reflecting on the Elbe River. Turning into the city square, I was struck by the towering height of the Frauenkirche, Church of Our Lady. After being decimated by Allied bombs during the end of the Second World War, its walls were barely waist high in reconstruction on my last visit in early 2000. Finally completed in 2006 — incorporating some 3,800 original stones found in the rubble, and peaked with a shiny gold cross pointing to the sky — it seemed to idealize the spirit of Dresden rising from the ashes of war. After quickly checking into the Townhouse Dresden hotel, I ventured out with my guide and group. The floodlit restorations of Baroque architecture housing the Semper Opera, the palaces turned into hotels, government buildings and museums were only a taste of the city’s reinvention, en route to our destination, the Alte Meister restaurant. Tucked into a historically rebuilt quadrant, its vaulted ceiling and walls — accented with fragments of tawny fresco that were salvaged from the original, pre-war structure — add eclectic flair to the intimate, elegant space. Dining on butternut and scallop soup, sea bream and passionfruit crème brulée, I realized right then that my earlier memories of this part of Saxony being dull and grim — in everything from architecture to cuisine — would be blown away, entirely refreshed.

In brilliant light the next morning, Dresden’s meticulous reconstructions of buildings that firebombs had reduced to rubble were evident everywhere, from the vast church square to small squares dignified by sculptures to a narrow byway painted with a historic fresco panel. While the Communists may have controlled East Germany, they also purposely preserved the devastations to symbolize the evils of war. After reunification, both the Saxony and German governments were intent on rebuilding Dresden to signal atonement for the horrors the Nazis had perpetrated.

On a tour of the Old Masters Picture Gallery — which is most famous for Raphael’s masterpiece The Sistine Madonna — 18th century paintings by Bernard Bellotto, aka Canaletto, depicted how Dresden had evolved over time. Inside the Royal Palace, rooms and galleries brimming with priceless artifacts reflect 1,000 years of history. Its Green Vault treasury, ballroom with gilded ceiling, red throne room and cases of embroidered costumes spoke of centuries of German artistry as well as incredibly lavish lifestyles. Notably among Dresden’s city works in progress are parts of the Zwinger. The regal Baroque architectural complex was started in 1709 by Elector Augustus II “The Strong,” who was then also King of Poland. Incidentally, the virile Elector/King, who was known to father 300 illegitimate children, kept his mistresses elsewhere.

From Dresden, a day trip revealed the pleasures of Saxony’s landscaped green spaces. Kromlau Park, which is famous for the Devil’s Bridge that casts a perfectly circular reflection in the river, is also renowned for its 80-hectare abundance of massive rhododendron and azalea plants. Though the blooms were gone by late October, I imagined the joy of strolling among the bright colours — purple, pink, yellow, blue, white — from spring to early fall. The UNESCO World Heritage site of Muskau Park has a remarkable history as it straddles the Neisse River, which marks the border between Germany and Poland. The 559-hectare park, created by Prince Hermann von Puckler-Muskau from 1815 to 1844, was designed as a “painting with plants.” By integrating a castle, bridges spanning the River Neisse, an arboretum of local and rare trees, sprawling green spaces with walkways leading to the local town of Bad Muskau and hilly viewpoints, the park ultimately created a utopian landscape that UNESCO credits for contributing to the discipline of landscape design. Exploring the park, we crossed the bridge from Saxony to Poland, snapping pictures of stunning views along the way, hilly groves of leafy trees kissed by the fall sun, the long ribbon of river flowing to a waterfall under the bridge and the castle holding court over a pretty lake. Inside the castle, historic exhibits include evidence of Prince Hermann’s fascinating love life.

Visit the Houses of Worship

Gorlitz exceeded my imagination on many levels. Beyond being a treasure-trove of Gothic, Renaissance, Baroque and art deco architecture, Gorlitz has elevated the celebrations of its 950-year history with the authentic renovation and refurbishment of the Grand Synagogue. Originally consecrated in 1911 for the then-thriving Jewish community, it miraculously survived Kristallnacht thanks to a few sympathetic souls. When the Nazis set it ablaze, the mayor sent fire brigades to douse the flames. Today, after millions spent, the synagogue’s magnificent ceiling — ringed with images of the gilded Lions of Judah — crowns the acoustically perfect sanctuary. Renamed as the Gorlitz Kulturforum Synagogue, today it hosts concerts, cultural programs, theatre performances and interfaith services. It is prized as a German Monument of National Importance. Although the Jewish community has dwindled to about 30 people, as I wrote this article, the synagogue was preparing gala Hannukah celebrations. I imagined the joy of lighting the menorah on its bimah, the platform in front of the Torah ark, truly a miracle after all these years.

Gorlitz — a.k.a. Gorliwood — has also garnered international stature as Germany’s hub for its burgeoning film industry. While ardent cinephiles follow the well-marked trail of sites used in Grand Hotel Budapest or Around the World in Eighty Days, others look for sites of Holocaust-related films, including Inglourious Basterds and The Reader. As I was entering the Lucie Schulte Restaurant, I caught my breath, suddenly recognizing Untermarkt Square, where the restaurant is located, as the site of the flaming book-burning scene in The Book Thief, an emotional Nazi-era film.

I detoured from Gorlitz to the Ore Mountains, where I discovered eternal Christmas in Seiffen, home of the original nutcracker and other holiday decorations. The festive aura of Christmas sparkles year-round in Seiffen. How this quaint village tucked high in the Erzgebirge Mountains gained fame for the original nutcracker toys is linked to its history as a hub of miners. More than four centuries ago, when Saxony’s once-thriving mining industry faltered with diminishing resources of silver, cobalt and tin, the miners of Seiffen resourcefully turned to their wood-carving skills to sustain their families. In the late 1800s, when a woodworker named Friedrich Wilhelm Fuchtner created a nutcracker that satirized a soldier wearing a crown resembling a miner’s hat, locals started creating nutcrackers that poked fun at authority figures in the mines and ruling class. When they realized the nutcrackers were being sought by people far and wide as toys for Christmas giving, they added other items that have, over generations, become treasured holiday ornaments: wooden pyramids decked with tiny characters, angels, stars, candle arches and incense smokers.

Today Seiffen abounds with shops brimming with authentic folk art and decorative souvenirs. Visitors are welcome to see workmanship in progress at Seiffener Volkskunst, where artisans carve the wooden nutcrackers and “dress” them like various characters.

A visit to Seiffen is enhanced with a stop at the Miner’s Church and the historic, 480-year-old Buntes Haus Hotel and Restaurant for a hearty meal with local beer.

Music and Remembrance in Leipzig

My short visit to Leipzig was just enough to whet my appetite to return. Totally revitalized since the early days of Germany’s reunification, the city literally zings with style and artistic culture. I sensed a modern, vibrant tempo at every turn, among people clustered at outdoor cafés, in shopping arcades, around historic landmarks, and in the contemporary lobby of the Vienna House Easy boutique hotel. As a music lover, I followed the music trail — marked by silver swirl inlays on the streets — thrilled to see museums and monuments dedicated to Felix Mendelssohn and Johann Sebastian Bach. Inside St. Thomas Church, hearing Bach’s organ music swell to the lofty gothic ceiling felt divine. A short walk from the Bach museum led to a vast platform holding 140 empty bronze chairs. On the former site of Leipzig’s Grand Synagogue, a significant Moorish structure that was destroyed on Kristallnacht, the chairs represent the 14,000 Jews who once worshipped there, many of whom perished. Forcing myself to sit in a chair, my heart felt this powerful Holocaust Memorial as an affirmation of respect and a vow to never allow such history to repeat. Today, it is the annual site of commemorative services as well as Hanukkah’s eight-day Festival of Lights.

After leaving here, I settled into the calm, polished aesthetic of Weinstock Weinstube Bistro for lunch. But my mind drifted off to my parents, their mental bubbles of concerts and parks. Coffee stirred me to the present and the realization that, while Germany continues to acknowledge its past, Saxony is evolving into a cultural gem for future generations.

For information on Saxony visit www.saxonytourism.com

The Liberation of the Netherlands: How the Dutch Still Honour Canadian Soldiers