A Guide to Birmingham, U.K., Host to the 2022 Commonwealth Games 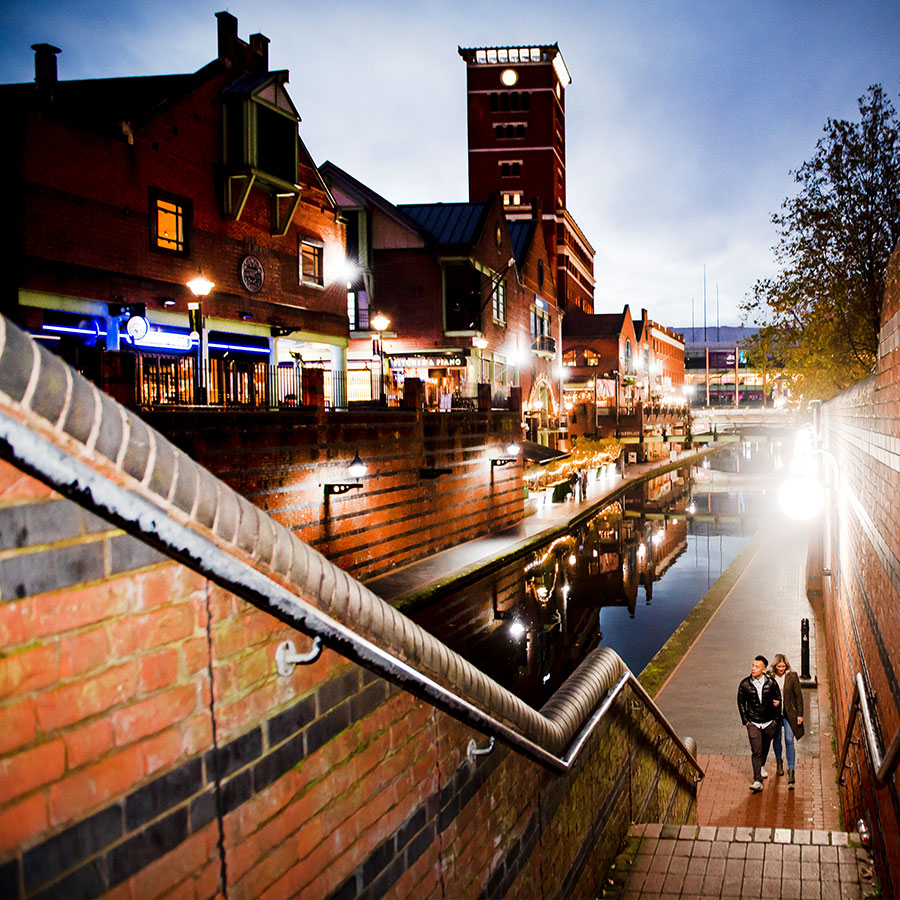 Aside from Her Majesty The Queen, when it comes to England, London, Liverpool and Manchester seem to get all the press. But we’ve got Birmingham on our radar. The city, named England’s second city, was the U.K.’s City of Culture for 2021, and is the host of the 2022 Commonwealth Games (July 28 – Aug. 8), and with all the fuss and restrictions around Tokyo and Beijing, this is finally an unfettered opportunity for our Canadian athletes to get their game on.

Here’s a fun fact: Canada also had a role to play in getting the games off the ground. The first-ever British Empire Games were held in Hamilton, Ont., in 1930. The city hosted six countries, spurring the idea of sport as a way to gather nations under the Brit banner in common. A year later, in 1931, the Commonwealth of Nations came into being.

The Commonwealth of Nations, which is a group of more than 50 countries that have the British Monarch as head of state, spans six continents, giving our athletes a chance to compete on a global level — daresay without the drama and politics of the Olympics.

I had the opportunity to speak with Dame Judith Macgregor, interim chair of the British Tourism Authority. She was visiting Toronto in May on the occasion of the Queen Baton Relay showcase event to preside over the passing of the baton, which made its way from here to Birmingham and opened the games.

As a former ambassador to Slovakia and Mexico, then British High Commissioner to South Africa, and now as chair of VisitBritain, Macgregor said at the event that she’s seen how tourism has a distinctive ability to drive economic growth “and to strengthen the close ties our nations already share. I am very pleased to be meeting with so many of our travel partners during my time in Canada, and to be taking part in meaningful conversations about how we can achieve our shared endeavour — the recovery of international travel.”

It’s worth reflecting, she added, that the visitor economy [in Great Britain] was supporting three million people in their jobs. Another reason why travel, whether abroad or here at home in Canada, has such a positive impact.

The Importance of the Commonwealth of Nations

The Commonwealth has a very strong stand on women’s rights, Macgregor said. “We need to help other women. Mentoring, and support for when they might come back from a long maternity leave, for example.”

The Commonwealth is also a big supplier of scholarships. One hundred students from South Africa, for example, every year go to any university in the U.K. they want, according to Macgregor. “Being part of the Commonwealth shares the softer skills it really specializes in [such as literacy, critical thinking and work ethic], as well as in development in research, sponsored throughout.”

While the games are a great and awe-inspiring spectacle, Macgregor believes in a thoughtful approach to planning. “Don’t build stadiums that are never to be used again; don’t make it something that the city can’t participate in [in the future].”

She added, “I think it’s really natural that, by definition, sporting championships, in this case, 50-plus countries, come into contact with each other. A lot of people are coming to Birmingham and the West Midlands. And we’re hoping they’ll also say: ‘While I’m here, why not explore more of the West Midlands, and maybe take a trip to Manchester or Liverpool or even Bristol.'”

IF YOU GO: The Best of Birmingham

Housed in a perfect example of art deco architecture; the institute was founded by Lady Martha Barber, and opened in 1939 by Queen Mary, Queen Elizabeth II’s grandmother. At the University of Birmingham, it is known primarily for its 19th century French impressionist and post-impressionist collections.

In an area that has recorded goldsmiths since the 1500s, the quarter came to its height during Queen Victoria’s reign. The neighbourhood is a gem in its own right, as more than 60 unique jewelry shops — many owned by the artisans themselves — are housed in what’s considered some of the best surviving Victorian buildings devoted to jewelry making in Europe. Start in Golden Square, and make your way down Warstone Lane and stop in at Artfull Expression for in house-designed and bespoke silver jewelry.

Take a stroll through one of the quarter’s two cemeteries, Key Hill or Warstone Lane, or go to Jewellery Quarter Cemeteries Project to plot your own tour; and take it a step further with a visit to the Coffin Works museum on Fleet Street. Did you know that Cadbury chocolate was born in Birmingham? And, in 1824 by a Quaker named John Cadbury. He started his sweet success by offering tea, coffee and drinking chocolate (a bit like our chocolate milk today). Although not within walking distance of the city centre, Cadbury World in the village of Bournville a few kilometres away, will satiate your sweet tooth.

True to its name, Grand Hotel certainly is, showing off its glamorous roots at every turn. Since 1879, the halls have played host to royalty, of both the regal and rock star variety, but at the turn of the millennium, it was also starting to show its age. The owners shuttered the property and, over the next two decades, embarked on a restoration and refurbishment project to the tune of £50 million. Less than a 15-minute walk from Birmingham’s New Street train station, the grande dame made her grand new entrance in May 2021, modern yet maintaining her fine Victorian bones, mixing original marble with modern art. The centrally located property overlooks St. Philip’s Cathedral, and public green space that surrounds it. Madeleine’s, the lobby bar with soaring ceilings, cushy velvet seating, wood-panelled details and a roaring fireplace on chilly nights, is the place to see and be seen. But, more importantly, was the service. On our visit, from the bellman to the reception to the restaurant, hotel staff were impeccable, warm and welcoming.

This part of England is known for its innovative Indian food. We suggest you take a high-low approach and have it both ways. Plus, with all the spices, such as saffron and turmeric, it’s a healthy way to indulge.

Go high end and book a table at Varanasi. Most seats in the house provide a view of the multi-level extravaganza of Southeast Asian decor, from the atrium to the three cocktail bars. The food is fine-dining Indian, which is tweaked to go with the season. Classic Tandoor is a menu staple, but try the curry bowls. It’s a version of Balti cooking, where the curry is cooked very quickly over high heat (versus the all-day simmering of traditional curry) and served in the same wok-like vessel in which it was cooked.

And don’t miss the Indian Brewery. We thoroughly enjoyed the raucous atmosphere and the colourful decor, and it was clear that the young staff really enjoyed working there. They were knowledgeable about the food, the service was on point, with a tab to match. Traditional thali platters came loaded with meat and veg options, and were simply delicious. The chef even has an Indian version of that British stalwart, fish and chips. There’s local beer — including the brewery’s own craft suds — on tap, and on some days two-for-one cocktails. The best of Indian street food without having to stand on the street.

If cocktails are your thing, both The Alchemist  and The Botanist are watering holes within walking distance of the Grand Hotel.

If you love to drive and love to go off-road even more, this one’s for you. It’s a splurge that every automobile, particularly SUV, fan will appreciate. The Land Rover, which is the SUV of choice for HM Queen Elizabeth II (we’ve actually seen her behind the wheel in her famous forest green version while visiting Windsor Castle). They still make them for her and the legions of Land Rover and Range Rover drivers in Solihull, the British manufacturer’s home base that’s part of the Jaguar label, about an hour from Birmingham. The Land Rover Experience we had was just plain incredible. We had a quick course on how, when going off-road, you can adjust all the vehicle’s bells and whistles — and there’s no shortage of them.

From mirrors that tilt to just about every angle to take corners with ease, and a tablet-sized view screen that offers nearly 360-degree views (roof included), there’s little margin for error or accident when you’ve got this much tech and power, literally, in your hands. With the help of a driver guide in the Range Rover in front of us, we followed instructions over walkie talkie and visually. We plowed our way through more than wheel-deep bogs, hiked our way up inclines that were so steep we’d have fallen aside if we hadn’t had our seatbelts on, yet the car just gripped. The zenith, for us, was when our guide suggested we take the stairs. Italian job? Not quite, but as the driver I took a deep breath before descending. But what a high! I drove a Land Rover down a set of concrete stairs. Solid as a rock, and well they should be, as the price tag of such luxury and safety is no small thing. And, if you can’t make it to Birmingham (although we really suggest you do), you can also book an experience through the trails and the odd moose, at the Fairmont Château Montebello in Quebec.

Birmingham is also the home of the Black Country, just outside the city named for its coal mines in the area of Dudley. More recently, this market town in the West Midlands of England has gained notice as the authentic location where much of the hit TV drama Peaky Blinders is filmed (Liverpool also stands in for some scenes).

It’s actually at the Black Country Museum, a living, open-air collection of buildings, automobiles, mechanical and smithing equipment, and tools and more, some preserved and restored from the industrial age of the late 1800s through the early 20th Century to the First World War era — the same period Peaky Blinders takes place. Rather than docents, the museum is staffed by actors of its own, dressed in period costume and channelling the citizens of the town of the day. The open-air collection of architecture has been so well preserved, the government is investing more to bring the buildings up to a more modern speed, circa 1960, keeping the history alive, yet also adding a more recent, living ode to the area. The canals, which feature prominently in the series, are a natural marvel and still act as transport to many parts of Birmingham and beyond.

It was here in the Black Country that the first steam engine was built, sending the first steam train to make tracks in America, and the Titanic’s anchor was crafted in the iron works, among many other industrial milestones.

A Farewell to “Peaky Blinders” and “Peek” of the Black Country, West Midlands, England