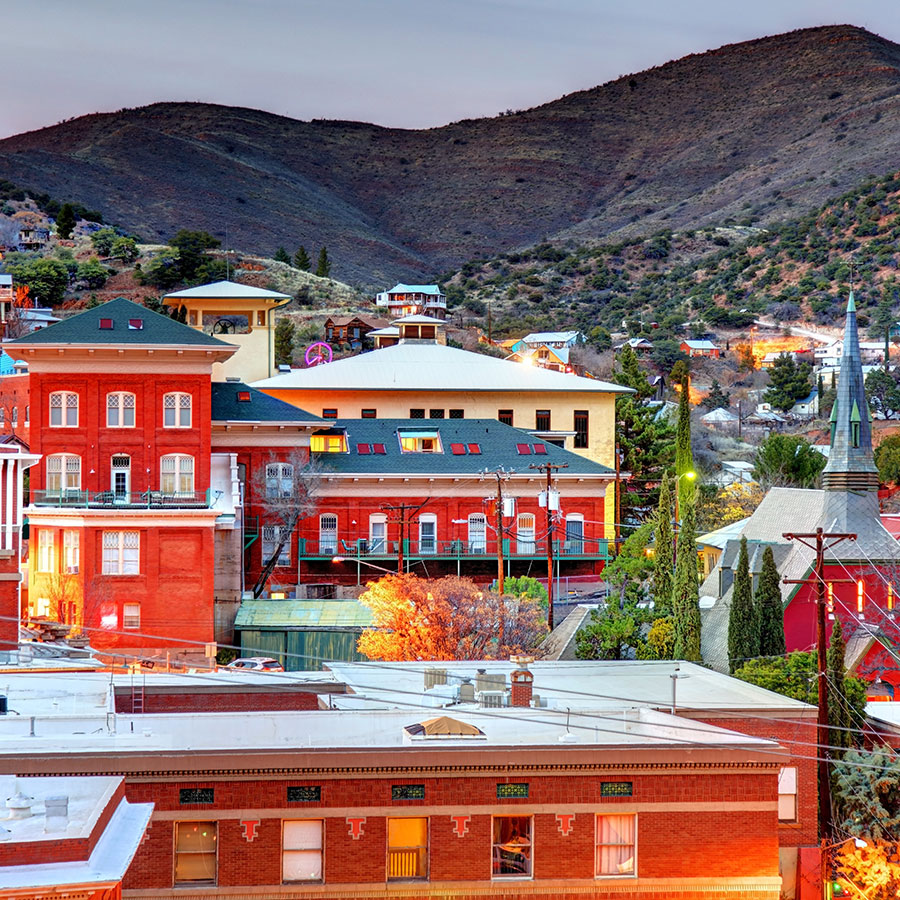 The historic town of Bisbee, Arizona, is well preserved, and the town’s architecture is a photographer’s delight. Photo: Denis Tangney Jr/Getty Images

From artsy towns and historic hot springs to great wine regions and a street made famous by one of the world’s best-known bands, there’s a lot to love in Arizona. Here are five must-see places to check out on your next visit.

A little more than an hour north of Phoenix, Castle Hot Springs resort opened in 1896 as the first luxury and wellness destination in Arizona. It attracted such families as the Roosevelts, Astors, Vanderbilts and Wrigleys. John F. Kennedy rehabbed here for several months after being injured during the Second World War. The rock pool hot springs are hidden along the rugged Bradshaw Mountains, and bungalows come with their own outdoor hot spring tub. There are 30 stand-alone cabins and bungalows, and the resort grows more than 500 varieties of fruits, vegetables, herbs and varietals. The food is spectacular. Adrenaline junkies can check out Arizona’s first Via Ferrata, which features iron spikes drilled into ancient rock that you can use for climbing.

This town in eastern Arizona has long been an important stop on Route 66, but it became a household word in the ’70s when the Eagles released the song “Take It Easy.” You’ll often find visitors “standin’ on the corner” with their selfie sticks in hand these days. There’s even a “Standin’ on the Corner” Park in town. La Posada is considered one of the state’s finest railside hotels, featuring graceful arches and public gardens. Guests over the years have included the likes of Clark Gable, Amelia Earhart and Will Rogers. The on-site Turquoise Room restaurant earns rave reviews. Just north of town is Homolovi State Park, with Hopi petroglyphs and archaeological sites.

This mountain community, southeast of Tucson and near the Mexico border, was founded in 1880 and featured a thriving mining industry that was based on the region’s rich reserves of copper and other precious metals. Both the Bisbee Mining & Historical Museum and the Bisbee Restoration Museum chronicle the city’s copper-mining past. By the early 1900’s, driven by the booming mining industry, Bisbee had become the largest city between St. Louis and San Francisco. It’s also home to Arizona’s first golf course (Turquoise Valley). In its heyday, Brewery Gulch boasted nearly 50 saloons and was considered the one of the liveliest spots in the west. The historic town centre is well preserved, and the town’s architecture is a photographer’s delight. There’s a monthly art walk and also a yearly Pride Festival.

Arizona has several wine regions, but the best known is southeast of Tucson, near the town of Sonoita. Mark Beres, co-founder of Flying Leap Vineyards, says he and two of his other winemaking partners met at the Air Force Academy in Colorado Springs.  It was after he was injured in Afghanistan that Beres decided to go into the wine business. (Another partner was a pilot who used to fly Dick Cheney and Michelle Obama around the country.) They make a number of varietals, including a lovely, deep red Petit Verdot. “It’s a unique terroir in Arizona,” Beres told me when I visited a few years ago. “The wine is every bit as good as it is anywhere.”

Up at Dos Cabezas Wineworks in Sonoita, they blend a wide variety of grapes. It makes for a long list of ingredients on the label, but they think it’s best to blend as many varieties as possible. Charron Vineyards is between Tucson and Sonoita and has a lovely patio. Try the Viognier if you like flavourful white wines.

Located high on top of Cleopatra Hill (5,200 feet) between Prescott and Flagstaff is the historic copper mining town of Jerome. Once known as the wickedest town in the west, Jerome was a copper-mining camp, which grew from a settlement of tents to a roaring mining community. Today, this is a thriving tourist and artist community with a population of about 450. You’ll find numerous art galleries and small wineries downtown. A number of the buildings have been lovingly restored, and more are planned for restoration. Dozens of quaint shops and specialty stores line the crooked streets. To the east, Tuzigoot National Monument preserves an ancient hilltop pueblo.