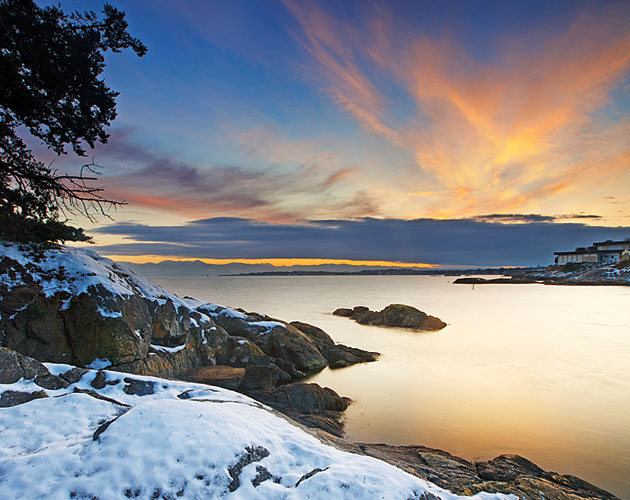 Bert Archer visits his hometown of Victoria, B.C. to discover a history that goes far beyond any double-decker bus tour.

What’s that point called?” We’re on the water just off Victoria, and Mark Salter, our tour guide and a member of the Songhees First Nation, has blanked on the name of a little piece of the topography we’re motoring past. “Finlayson,” says Brett Soberg, naturalist, co-owner of Eagle Wing Tours, and the white guy who’s steering the boat. “Right,” says Salter, getting back into the groove. “I was going to say Pemberton. I knew it was named for one of the settlers.”

Even for those who don’t think of Canada in colonial terms, Victoria is pretty darn settled. I went to high school here, and the number of white people with home counties accents who had never been to the U.K. was higher than you might have thought reasonable. The top tourist attractions of this largely tourist town remain things like the afternoon tea at the Fairmont Empress Hotel, which until recently also featured the Bengal Lounge, with tiger-skin motifs and a curry brunch.

The city itself is named for the woman in whose name all those hollow treaties were signed. One of the annual social highlights, for locals and tourists alike, is the Oak Bay Tea Party Parade, when brass bands and scouts march to celebrate all that Oak Bay is.

As we swing around another promontory and see the imposing Oak Bay Beach Hotel, elder Joan Morris, who’s also with us, points to the crags that have mostly been smoothed out to let hotel guests get down to the pool that overlooks the water. Though she’s only in her 60s, she remembers, when she was eight and 10, climbing up those same crags from her family’s boat, foraging for shellfish. The Anglo-Canadian mantle lies lightly on the land for her, one of the last to have grown up on the tiny Chatham Islands four kilometre or so off the coast.

A little farther on, as we pass Uplands, a seven- and eight-figure sort of neighbourhood, she tells us how good the land there was for camas, a member of the asparagus family sometimes known as blue hyacinth, whose bulbs were a Songhees staple.

But it’s when we reach Cadboro Bay that the scales really fall. Another upper-middle-class neighbourhood, the bay, it turned out, is also a battlefield. Morris tells us a story her grandfather told his grandfather heard from his own grandfather, about the Haida, an up-island slaving nation, who would come down to make occasional raids to stock up on women and children.

One day, the story goes, the more agricultural and foragesome Songhees had an idea. They set a watch out on what’s now known as Jemmy Jones Island, who was able to signal the Songhees when the Haida canoes were on their way around Ten Mile Point. The women and children all ran around the bay into camouflaged shelters, leaving their beach fires burning, to signal the Haida that all was well and active and ripe for plucking.

The men, meanwhile, boarded their canoes in an inlet that now houses the Royal Victoria Yacht Club, tucked away so no one who didn’t know they were there could see them, and waited for the Haida to pass Flower Island and get into the mouth of the bay, where the Songhees cut them off and slaughtered them. Morris’s grandfather’s grandfather’s grandfather said that was the last time the Haida ever tried that.

I left Victoria after high school and, though I’ve visited family there since, I’ve never really looked back. But if the Victoria I knew, with its double-decker city buses and killer whale tchotchke shops, its cosy British pubs and its slightly more ribald Scottish ones, could be so easily peeled back to reveal a history so much older, so much fiercer, I may have to come back more often.

A version of this article appeared in the Summer issue with the headline, “On The Point,” p. 68.