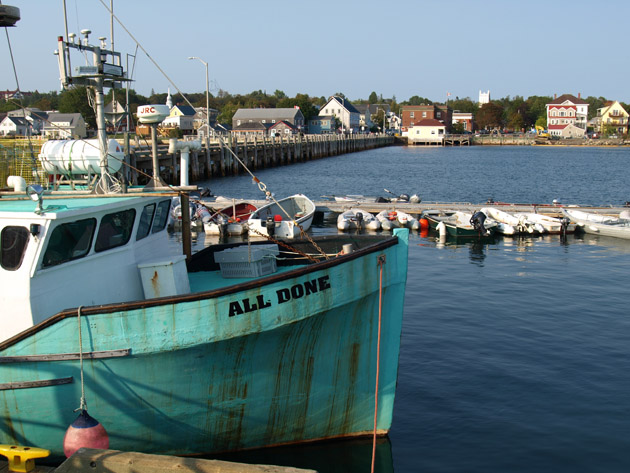 The community of St. Andrews by-the-Sea hugs the coastline at Passamaquoddy Bay in southwest New Brunswick. Famous as an early shipbuilding centre, the town soon found fortune as a seaside resort, where visitors discovered a restful pace of life and a haven for rejuvenation. The clean air and celebrated cure-all salt water baths were believed to have healing properties—a claim that drew many deep-pocketed tourists from both sides of the border.

As one of Canada’s oldest towns, tiny St. Andrews is famous for its well-preserved, historic side streets. Almost half the buildings in the original Town Plat are more than a century old, and several top the two-hundred-year mark. Established just on the edge of the colonies, the main streets are named after the King’s family (including his 15 children!). History is written on the street signs.

Those deep-pocketed tourists have long been coming to The Algonquin—nicknamed the “Castle by the Sea”—perched atop the hill with a fantastic view of the village and both coasts of the peninsula. The grand hotel has hosted famous and powerful guests, including the Rockefellers, many Canadian prime ministers and members of the British royal family. There is no bad meal here—even our afternoon snack of Algonquin Seafood Chowder (loaded with haddock, salmon, clams, shrimp, mussels and lobster) and Lobster Grilled Cheese (grilled Texas toast filled with cheddar cheese, peameal bacon and lobster salad) surpassed expectations.

Right next door to the gardens we discovered another St. Andrews treasure, the historic Kingsbrae Arms, a gracious award winning property with bedrooms and suites renovated to luxury standards. Inside, rooms have been meticulously restored and decorated in an eclectic style, including artwork and furnishings imported from the Far East. Steps from the back patio, the inn’s flowerbeds could almost be an extension of its famous botanical neighbour. We found bliss sitting back with the house cocktail, a Kingsbrae Fizz, served with a spear of fresh raspberries and blackberries.

Tearing ourselves away from St. Andrews was a challenge. But the promise of a scenic coastal drive along the hills, forests and coastline of the Bay of Fundy’s north shore was irresistible.

If there is a way to escape the tidal pull of Fundy National Park, we did not find it. There is no better stretch of coastline to see the power of the Moon’s gravity as the ocean water rises and falls twice a day. It’s part of what makes this region the UNESCO Fundy Biosphere Reserve.

In the neighbouring hamlet of Alma (“population 213” states the hand-scribbled sign at the general store) the fishing vessels might be sitting on the bottom of the ocean floor or bobbing in the current, depending on the tide schedule.

Fundy National Park is a Dark Sky Preserve, which made for perfect camping conditions—dark, pristine and especially quiet in the shoulder season. There wasn’t a bad site at Chignecto Campground and most of the campers—at this low season time of the calendar—were retirees doing a little road tripping.

The weather along this stretch of coastline can be a little hit-and-miss. Stopping at the Cape Enrage lighthouse, things were pretty fogged in. The lighthouse staff was amused: “Every day here is like shaking your days in a bag and you don’t know what you’re going to pull out.”

A little further along, the cadence of the tides at Hopewell Rocks made for excellent camera shots. Best time to visit is three hours before or after low tide; where else do you get the chance to venture out onto the ocean floor? Autumn is the perfect time to visit – fewer crowds jostling to get close to the 310-million-year-old Flowerpot Rock formations. Displays at the excellent self-guided interpretive centre explain the power of the tides that dump 100 billion metric tons of water into the long, narrow bay. The water enters from the relatively wide and deep ocean and funnels into the narrow and shallow bay, so it has nowhere to go but up. Each tide takes about six hours and 13 minutes to come all the way in and all the way out. Put in perspective: the average tide in the world is about one metre; at Hopewell Cape it is about 14 metres. It can take only 27 minutes for the water to rise from foot to chin.

Waving goodbye to New Brunswick involved one very large lobster. No matter what time of year, the giant lobster at Shediac is (literally) crawling with tourists. Not so bad in the shoulder season—another good reason to travel at this boomer-friendly time of the year.