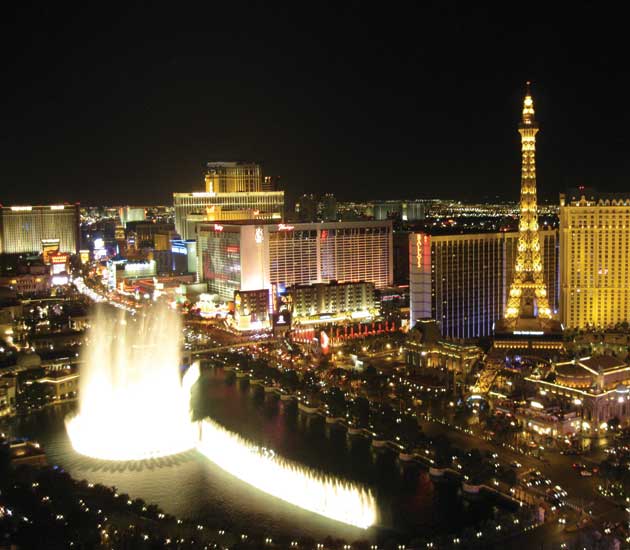 What happens in Vegas doesn’t have to stay in Vegas, anymore. Here, a few new ways to play in Sin City.

Desert oasis, set to light up the night sky with glitz, glamour and gambling. Las Vegas, 1940s, still full of promise, particularly for the high roller Benjamin (Bugsy) Siegel, who was looking to reinvent himself from East Coast bootlegger and Hollywood player to legitimate business man. He started by acquiring the Flamingo, still a Strip stalwart to this day, with the pledge to bring in the big and not-so-big spenders with the lure of booze, broads and the best in showbiz (in an ironic twist, wholesome Donny and Marie are the headliners there now).

The rest, as they say, is history. And, as the biopic starring Warren Beatty shows, it’s the town that Bugsy built – before he himself fell to a mob hit. A seductive yet checkered past that has been so well documented on film (Casino, anyone?) is now immortalized in the most fitting of places. Housed in downtown’s former federal courthouse where the Kefauver hearings, which sought to expose organized crime, actually took place and subtitled the National Museum of Organized Crime and Law Enforcement, the Mob Museum is a fascinating permanent exhibition that offers “two sides to every story.”

Chronicling the origins of the Mob, dating back to the turn of the 20th century, it follows its law-breakers (Capone, Luciano, Gotti, Lansky, Siegel et al.) and its mob busters (Ness, Hoover et al.) and just about every known associate in-between (Hughes, the Kennedys et al.). The museum is a floor-by-floor journey of not just the feared organization’s rise but its parallels to much of America’s own history over this time period. The ghosts of those who were on trial here, no doubt haunt the building, while a recreation of the St. Valentine’s Day Massacre wall, an FBI weapons training simulator and an excellent examination of the myth of the mob in pop culture are just some of the many highlights of this unique attraction. $10 to $20; 300 Stewart Ave.; 702-229-2734; themobmuseum.org

If you’re a fan of the new TV show Vegas, you’ll have spotted some of the ’60s-era vintage signage that has made the city famous. From the classical fonts used for the original Caesars’ sign (the E is taken from classic Roman script) to the space-age thrust of the letters used for the Stardust, these marquees of hotels past now have the Neon Museum’s “boneyard” for where neon signs go to become artwork of a different kind.

When the action shifted from downtown Vegas and Fremont Street to what’s now the Strip and Las Vegas Boulevard, many of the originals, like the Golden Nugget, Sahara and the infamous cowboy known to locals as Vegas Vic gracing the front of the Pioneer Club, were either forced to shutter or update their properties. More than 150 of these signs, some from as early as the 1930s, which are still among the most photographed and famous around the world as symbols of Sin City, can be found at this boneyard park, whose entry sign is cleverly composed of gathered iconic letters (one of the Ns is from the Golden Nugget, while the E is from Caesars Palace). The Stardust Hotel’s architecture and sign font design were born of the space-age (even the galactic cloud that was part of the sign is on display here): Sputnik was orbiting the earth at the time, and the marquee was reaching new heights, making it (at 181 feet) the tallest sign in the world.

The Tenors, YoYo Ma, Branford Marsalis, the cast from Wicked – where are we? New York City’s Broadway? London’s West End? Toronto’s Theatre district? Actually, we’re at the Smith Center for the Performing Arts. Yes, David Copperfield, Cher and Cirque du Soleil have made room on the marquee for other class acts that are elevating the performing arts scene in Sin City. Okay, Shania and Céline still hold court at Caesar’s Palace, but now visitors have an option that puts them in front of first-run theatre productions, hot jazz artists up close and rock stars who know how to work a room without the mind-boggling pyrotechnic optics available on any given evening at the glittering casinos of Las Vegas Boulevard (some hotels even offer shuttle services to the venue, which is about 20 minutes from the Strip). With the buildings a beautiful nod to the art deco period, one could easily imagine Gatsby and Daisy fitting in just fine. n 361 Symphony Park Ave.; 702-982-7805; www.thesmithcenter.com

Even card sharks need to have a civilized moment or two. Tea at the Mandarin Oriental’s tea lounge is just about as civilized as one can get in Sin City. Known around the world for spectacular service, the hotel brings this ritual to new heights – literally, as it’s situated in the Sky Lobby on the 23rd floor, with a view of the Strip. But it’s not stuffy, mind you. Madeleines mix with macarons, egg salad sidles up nicely to smoked salmon and sweets are served Bento-box style. If you’re a fan of bubbles, you can add a glass of champagne for an extra fee. (And if you thought this was Vegas’ best kept secret, I’ll do you one better by throwing in this non-sequitur: the hotel’s pool cabanas for four start at $180 from 8 a.m. to 5 p.m. – and you don’t need to be a guest!) n $36 ($56 with Champagne); 2 to 5 p.m. daily; 3752 Las Vegas Blvd. S.; 702-590-8888; www.mandarinoriental.com/lasvegas

But we’re in Vegas, baby, so go ahead, reward all this rather cultivated behaviour with a few cocktails from The Chandelier at The Cosmopolitan hotel. Mixologist Mariena Mercer dreams up concoctions (above), such as Fire-Breathing Dragon (freezed-dried raspberry purée and liquid nitrogen), the Blue Mule (blueberry vodka, ginger beer and simple syrup) and the Fit to be Thai’ed (Kai coconut pandan vodka, Thai chili syrup, peanut butter, lemongrass, bird’s-eye chili, kaffir lime leaves, coconut cream and sweet ginger puree). Cheers! www.cosmopolitanlas vegas.com

— The spa at the Bellagio has Jukari Fit to Flex based on Cirque du Soleil stretches and moves. The hotel features O, its permanent Cirque water-based show. www.bellagio.com

— Aria has an indoor-outdoor hike-fitness circuit-art tour that reveals the $40 million worth of public art on display throughout the hotel and CityCenter grounds. www.arialasvegas.com

— At the Mirage, try yoga in view of the dolphins, alongside their aquarium homes. The one-hour all-levels class limits participants to eight and includes access to the spa at only $50. www.mirage.com