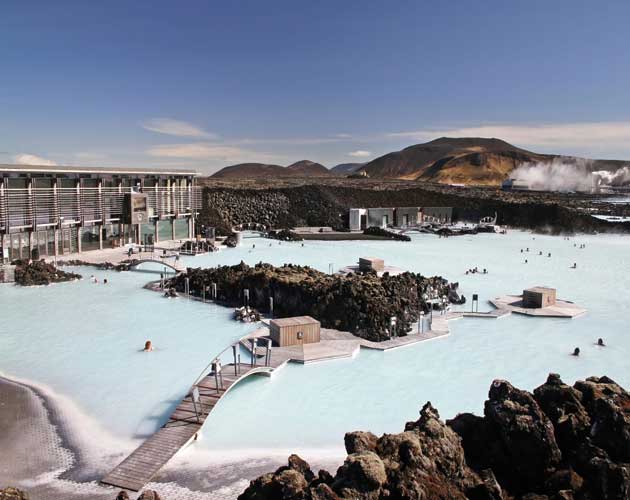 Iceland, the land of fire and ice, offers a dichotomy between old and new, between least developed in the 19th century and one of the most prosperous – until the 2008 economic fiasco. Arlene Stacey explores the contradictions.

As the plane descends into Reykjavik, I realize Iceland is a misnomer – most of the country is ice-free (whereas Greenland is 80 per cent ice). Not that Iceland is green. It’s black and white – black lava fields contrast with white glaciers and snow-encrusted mountains. The landscape is so lunar-like that northeast Iceland was used by U.S. astronauts training for moonwalks.

The whole country is a contradiction: although it lies just outside the Arctic Circle, Iceland enjoys a temperate climate due to the influence of the Gulf Stream. It never recovered from the slash-and-burn agricultural practices of the early Norse settlers. The trees didn’t come back, and without leaves and trees to decompose, the soil didn’t replenish itself – and because that soil is volcanic, what does grow there grows slowly. Yet it is a country that, until recently, was dependent on agriculture and fishing.

Considered a young country, it boasts the oldest surviving legislative assembly in the world – established in AD 930. Yet Reykjavik, the world’s most northern capital, wasn’t founded until the 18th century and is now home to two-thirds of the country’s population – about 320,000 compared to 1.8 million in similar-sized southern Ontario, making it the least populated country in Europe.

Walking the streets of Reykjavik – one of the most walkable cities I’ve visited (perhaps one of the reasons that Lonely Planet named it in the Best of Travel for 2012), I first think the restaurant signs on the sidewalks of the main shopping street, the historic Laugavegur, offering whale and puffin are indicative of some kind of local humour. Then I realize it’s an Icelandic version of surf and turf. Puffins, those comedic little seabirds that catch more fish than they can fly off with, have been a staple of Icelandic fare for centuries, part of their national dish.

Whale meat, however, is not a traditional food, and Iceland’s reentry into whaling in 2006 in violation of the moratorium has been controversial. I decide to join Pierce Brosnan and U.S. President Barack Obama by imposing my own sanctions: I decide on less contentious fare at Ristorante Caruso, an “Icelandic restaurant with a southern flair,” which offers neither puffin nor whale. At my linen-covered table in the window with a Kaldi in hand – prohibition of beer in Iceland ended only 24 years ago, making it the last country (outside of the Islamic world) to allow the beverage, I watch a juggler on the sidewalk entertain passersby, many of them university students who seem to dominate the downtown streets dominated by low-rise buildings.

In a land that has a short growing season and thin soil, it’s understandable that traditional Icelandic foods, or thorramatur, are dried, smoked and salted: dried fish, smoked and salted lamb, smoked and pickled salmon, cured shark. With the scarcity of trees, wood is at a premium, so the smoke is customarily supplied by dried sheep dung mixed with straw. I’m beginning to appreciate skyr even more – a yogurt-like cheese made from skimmed milk – and wonder if
I can live on it for a few more days.

Other than Björk, I knew little about Iceland before I visited. It appears Björk is not a stage name but her first name. Her full name is Björk Guomundsdóttir. Iceland follows the old Nordic tradition of patronymic names. Surnames are not inherited from preceding generations but built upon, adding a suffix (“-son” or “-dóttir”) to the father’s first name. So Björk’s dad must be Guomunds. Such a practice makes it confusing to custom officials when Icelandic families travel internationally: a mother, father, son and daughter all have different “last” names. The mother would have added “-dóttir” to her father’s first name; the father would have added “-son” to his father’s first name; the son adds “-son” to his dad’s first name and the girl would add “-dóttir” to it.

Culturally, Icelanders address each other by their first names. Even the phone book is alphabeticized by first name (it includes occupations to help identify the person you’re trying to contact). Newspapers address the prime minister by his or her first name. Current PM Johanna Sigurdardóttir is called Johanna by the press. She steps down as Iceland’s first female prime minister and the world’s first openly gay head of state this month. An openly gay female prime minister is not unexpected for a country that holds the No. 1 position in the global Gender Gap Report 2012. Iceland is a left-of-centre country, with universal health, 99.9 per cent literacy, gender equality and no standing army. And we thought Canada was progressive.

After the privatization of banking in 2003, the country’s economy moved from agriculture and fishing to financial services and investment banking, Iceland was fast on its way to becoming the most prosperous country in the world. Then the bubble burst, and unemployment ballooned from two per cent to an all-time high of 9.3 per cent. Under Johanna’s leadership, stability has returned to this country after it lost its most promising young people, who migrated to escape the effects of the economic downturn. Today, the IMF considers Iceland’s recovery the most successful even though the country refused IMF prescriptions, let the banks fail and charged those held responsible – including the prime minister at the time.

Another anomaly: in 2010, to kick-start a whole new marketing program, the president of Iceland, Olafur Ragnar Grimsson (obviously, his dad’s name was Grims), invited any tourists in Reykjavik to his palatial home for pancakes. This sparked a successful campaign to boost tourism that saw Icelanders personally opening their doors to visitors for a true Icelandic experience. Fast track to 2012: tourists more than double the population of locals, and there are complaints that they are spoiling the attractions they are coming for.

One attraction no one could ruin is the magnificent new Harpa Concert Hall, proving to the world that Iceland is truly recovering from its economic woes. With an audience of 100,000 – a third of the entire country’s population – for the opening ceremonies two years ago, its 10,000 panes of glass reflect and fragment the available light, whether it’s the endless summer sun or the filtered gloom of winter, like an ice palace shimmering on the waterfront. Harpa is a strong contrast to the low-rise stone and concrete construction of the rest of the city where homes are often clad in metal because of the scarcity of wood.

Packing my Icelandic wool scarf and mittens – the wool is insulating and water repellant, made from a strain of sheep protected by centuries of isolation – I sign up for a popular stop on my way to the airport: the Blue Lagoon. Considered a world wonder by National Geo, the Blue Lagoon is about 50 kilometres from the city and only 20 kilometres from the airport.  After stripping down and showering and donning a bathing suit, I make my way into the warm, milky-blue seawater. As I wade toward the swim-up bar, a burly man in front of me says, “I’ll have a beer – Kaldi, if you have it – and a green algae mask.”

It’s a surreal moment in the famous Blue Lagoon, whose popularity with the tourists has driven the locals to less expensive “hot pots,” or geo-thermally heated pools. In the Blue Lagoon, men, women and children are taking the waters on this chilly day in early February, their faces painted green, grey and white, like denizens of William Golding’s Lord of the Flies. Steam drifts over the black volcanic rock that surrounds us.

With its unusual beauty and commitment to unique eco-friendly geo-thermal energy, Iceland was understandably the choice of John Lennon and Yoko Ono for their dream of the Imagine Peace Tower. But sadly, it was Yoko on her own who unveiled the Imagine Peace Tower as a memorial to John in 2007. Normally, the tower of light, which can beam skyward 4,000 metres into the sky (Imagine there’s no heaven) is lit from Oct. 9 (Lennon’s birthday) until Dec. 8 (the date of his murder), illuminating Lennon’s dream of world peace. Its 15 searchlights, prisms and mirrors use only 75 kW of power. Imagine Peace is carved on the white stone base in 24 languages.

From isolation in the mid-Atlantic to a symbol of world peace, Iceland is indeed, to paraphrase Ono, a “strange and magical place.”