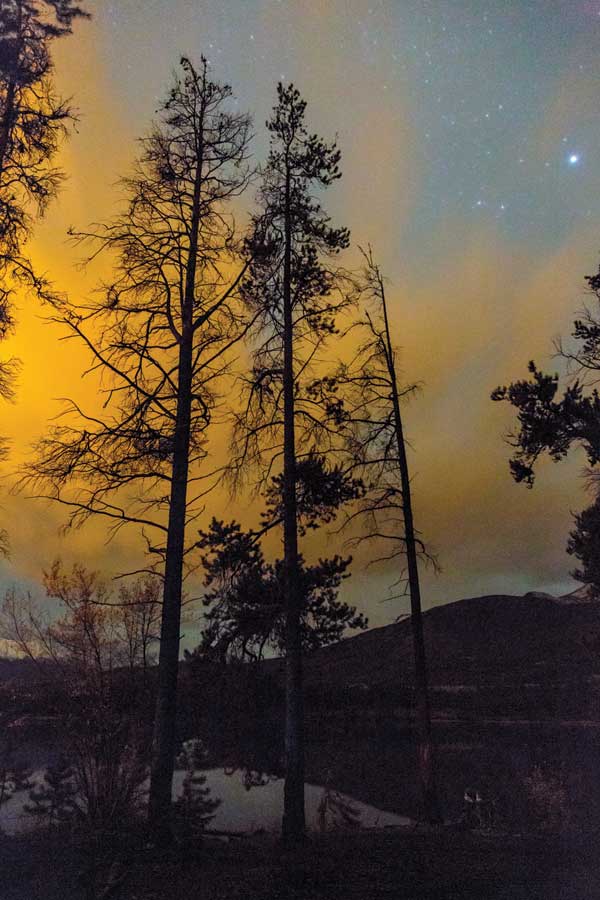 When’s the last time you saw the Milky Way with your own eyes?

As real estate development encroaches over our green spaces, stray light from street lights, billboards and other sources illuminate the sky, spoiling our views of the stars. In reaction, a global dark-sky movement has emerged to fight against light pollution.

In 2011, the Royal Astronomical Society of Canada declared Jasper National Park a dark-sky preserve, where no man made light penetrates. At more than 11,000 square kilometres, Jasper is Canada’s most northerly Rocky Mountain national park, part of a spectacular UNESCO World Heritage Site and the world’s largest dark-sky preserve. That year also saw the launch of the annual Jasper Dark Sky Festival, to tap into this new eco-tourism travel niche market.

The autumn weekend get-together includes training and orientation sessions for astronomy newbies, events in the great outdoors that don’t demand a high level of physical fitness, night sky photography opportunities and plenty to appeal to every age group, with multigenerational families seeming to outnumber singles.

Indeed, you can, I thought during the Pyramid Island Starlight Adventure the next evening, the high point of the event-packed weekend, when we finally got to stargaze. A pathway off Pyramid Lake Road is lined with candles, leading to a pedestrian causeway connecting to a little island in the lake. A jovial crowd of astronomy buffs have gathered in the clearing overlooking picturesque Pyramid Mountain, and take turns peering through telescopes the organizers have provided. They whoop it up when a shooting star flies by.

B.C.-based dark-sky photographer Yuichi Takasaka, whose work adorns NASA and National Geographic web pages, shares his tips and techniques. He also leads northern lights photography tours to Yellowknife. “This is a number-one thing for the Japanese to do before they die. Some Japanese love the northern lights so much they come back every year.” He shoots with two cameras at a time and takes 10,000 pictures in a single night. Later, he will merge the photos to make a star-trails picture.

Inspired, and like the other photographers who’ve come here to capture the night sky, I strike out on my own and look for a grove of fir trees. I am scouting for that perfect jagged-branched conifer, à la Tom Thomson’s iconic The Jack Pine painting in the National Gallery of Canada, to frame my shot. What better way to convey the great Canadian Outdoors?

It takes awhile to get the hang of it before I have any usable shots. Star photography is a balancing act of finding an exposure sufficiently long (at least 30 seconds) for the sensor to gather a bright image, but not so long that the earth’s rotation generates blur.

I am out there en plein air from 8 p.m. until past midnight, when clouds start closing in and obscuring the stars. It’s cold enough to kill off any mosquitoes and black flies, yet warm enough for me to stay comfortable wearing just a sweater. And since the lake isn’t frozen, I’m able to capture reflections of stars and trees in the water.

I suppress the urge to reach out to the stars and touch them. Viewed in Jasper’s pristine, clear air, the stars take on a palpable “three dimensiality,” to borrow a photographer friend’s memorable malapropism.

As I stand out there for hours, alone in the silence and darkness, my auditory sense abhors the vacuum. Then, in my mind’s ear, I hear the star music from Beethoven’s Ninth Symphony. While the choir sings, ” … above the starry canopy must a loving Father dwell,” time seemingly stands still. Strings and winds have a long, sustained tremolo (rapid reiteration of a single note) with a dynamic marking of “sempre pianissimo” (as soft as possible, always). This music is the aural analogue of what I hope to convey in my photos, of those millions of eternally twinkling, far-off stars.

Astronomy-related musical memories from my symphony-musician past bubble up from my unconscious. I recall my childlike wonder and awe when, at 16, I played Haydn’s  Creation for the first time, at a summer music festival. I was fascinated by the oratorio’s many references to heavenly bodies, as in: “The heavens declare the glory of God; and the firmament showeth his handywork.” Previously, I had thought of outer space as a void, until Haydn got me thinking of it as a separate place, an expanse, a layer of the universe.

Here, in Jasper, I can now see what the composer was getting at.

Jasper is remote and, if you miss the daily public transportation connections, cab fare for the almost five-hour ride from Edmonton’s Airport is about $600. Fly into Calgary instead and drive or bus to Jasper via Banff and Lake Louise on the Icefields Parkway, a 232-kilometre stretch of highway winding along the Continental Divide that Condé Nast Traveler, National Geographic and Tripadvisor.ca rate as one of the world’s most scenic drives.

Fairmont Jasper Park Lodge: In October, when the festival takes place, you can have luxury-hotel comfort at shoulder-season rates. The hotel sprawls over 700 acres in one- or two-storey bungalows. On the way to Cavell’s, the hotel’s fine-dining resto, you may encounter elk grazing against a majestic misty mountain background. The main building was the largest single-level log structure in the world when it opened in 1953. Fairmont deserves credit for lovingly preserving the totem-pole columns and the rest of the atmospheric period decor. www.jasperdarksky.org