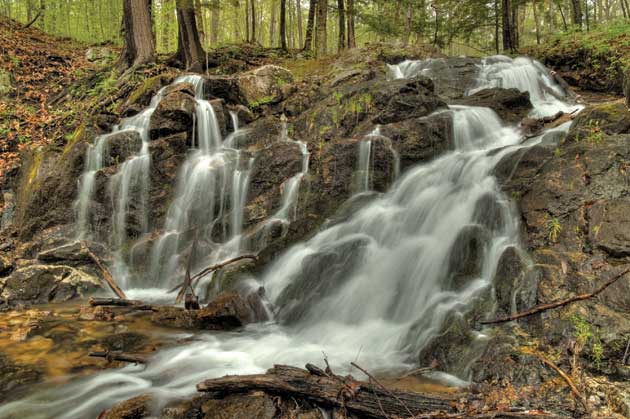 I CAN HEAR the rushing water minutes away.

The trail’s slight incline levels off, and a sharp right turn down a short path puts us in front of the Bridal Veil Falls in Gatineau Park. The water doesn’t flow with great haste, showering mist in the air around us. These falls are much too small for such dramatics. Rather, it flows gently, gracefully even, over the rocks and into the stream below. I walk closer to get a better view. Trees cling to the edge of the cliff, and greenery surrounds the entire area. It’s clear why William Lyon Mackenzie King – our 10th prime minister and Canada’s first official citizen, having received certificate 0001 when the Canadian Citizenship Act was enacted in 1947 – loved this trail.

In 1900, 21 years before becoming prime minister, King was introduced to Kingsmere in the Gatineau Hills, also the home of Meech Lake and its now famous accord, just north of downtown Ottawa. So enamoured with it, King bought property soon after, built a four-room cabin in 1903 and continued to acquire more land until he owned 500 acres with two houses and three cottages – and what’s now the Mackenzie King Estate in the Park.

“I came out to Kingsmere on Monday night to my own cottage,” King writes in his personal journal in 1916. “Such happiness as I felt in being under my own roof, amid the trees, away from the world of humans and with nature and solitude for a time.”

Standing by the falls, I understand – to a miniscule degree, at least – what King felt. The park presents a rare reprieve from the city.

It’s a main reason why the group of retirees we just passed come to the park nearly every day. Louis-René Sénéchal, senior co-ordinator of interpretation and information for Gatineau Park, explains. “[Retirees] make up the largest portion of the park’s visitors. Coming here, going for even a short hike throughout the week, it’s healthy for the mind and body,” he says.

The baby boomer generation has truly embraced outdoor adventure, Sénéchal adds, having the means and transportation to travel outside of the city, turning Gatineau Park into a destination. Exposing Canadians to the area was a great joy for King but also presented personal concerns, which explains his conflicted state when it was time to establish the park in 1938.

“I told [Finance Minister Charles Dunning] to go ahead with the work [of creating Gatineau Park],” King writes in 1937. “Though personally it meant less in the way of seclusion for myself … to have even the Meech Lake district open to tourists. I believe that we owe it to the Capital of Canada to save that part of its environment.”

The path around the Waterfall and Lauriault Trails is not arduous – the Luskville Falls Trail I scaled earlier in the year is much more demanding, with its 290-metre ascent toward a spectacular view of the Ottawa River Valley – but I can understand King’s affinity with it. His estate looks out into the forest, and the falls are an obvious draw, but there’s an intangible peace that hangs over the area, a quietness that certainly offered King’s mind freedom to wander and explore. In that moment, I want to borrow a DeLorean, head back in time and reassure King that he’s perfectly right and sane to keep this place to himself.

Sénéchal stops me mid-thought. “I love when this happens,” he says, motioning downward. A deer’s footprint lies next to human boot prints. “We think this park is ours, but it’s theirs – we’re here simply to enjoy and help preserve; this is their home.” King likely recognized this, that the park – at least the portion he occupied – ultimately wasn’t his. It can explain why he bequeathed it to the Canadian people.

Gatineau Park turns 75 on July 1, with Sénéchal leading a reinterpretation of the park – placards providing historical information and details – through King’s eyes. “It is very lovely here … the trees … the breezes and the skies makes one’s heart rejoice,” King wrote in 1915.

As I peer into our country’s past while soaking in its present beauty, these feelings are still evident nearly 100 years later.   (www.canadascapital.gc.ca)