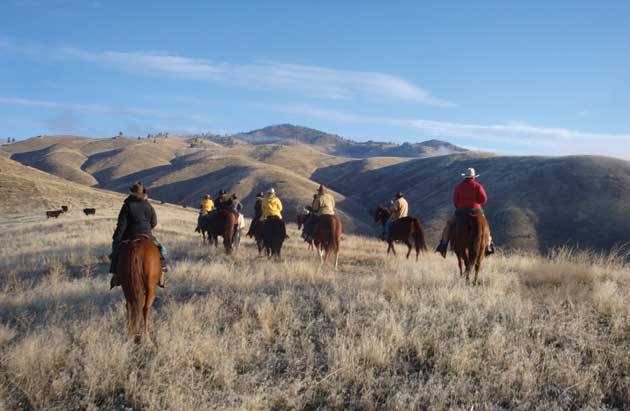 Ride with a posse of cowgirls. Luxuriate in a Montana hideaway. Check and check as Jayne MacAulay works through her bucket list.

Does anyone need hand cream?” The offer suddenly seems funny when one woman snorts, “That’s a question you’ll never hear on a guys’ trip.”

“ ‘Does this horse make my butt look small?’ ” another laughs. “Or ‘Did you bring toilet paper?’ ”

We’re a dozen “cowgirls” on the first annual 100 Klicks for Chicks ride, based at the luxurious Triple Creek Ranch, a Relais & Châteaux-affiliated property in the Bitterroot Mountains about two hours from Missoula, Mont. We’re riding 100 kilometres over four days, but each night we’re cosseted at the ranch with cocktails, gourmet food of the highest quality and a good night’s sleep in opulent log cabins appointed with vintage western art.

This extended weekend at the end of October has been anything but girlie. I’m usually on my own horse at least twice a week, but by the end of my first outing – our longest at 34 kilometres – I could think of nothing but soaking my saddle-weary bones in the hot tub at my cabin.

The 600-acre ranch lies at the base of Trapper Peak, its jagged 3,100-metre summit the highest in the Bitterroot Mountains and western Montana. Back in 1805, Lewis and Clark’s famed expedition followed the Bitterroot River through here and finally found a way over the mountains to the Pacific. The rocky terrain contrasts with the rolling foothills of the Sapphire Mountains just to the east, where Triple Creek owners Craig and Barbara Barrett also own the 26,000-acre CB Ranch, where they raise Black Angus cattle. (Frequent guests at Triple Creek, they purchased the ranch in 1996, when the owner decided to sell.)

We mount up at the head of the Tin Cup Creek trail in the 1.3 million-acre Selway-Bitterroot Wilderness that sprawls across the border of Idaho and Montana (a quarter million of it in Montana). The wranglers – both named Kristin and quickly dubbed K1 and K2 – match us up well with the horses. Doc, a little bay, responds to my lightest command. Maura Waszkiewicz, a tall, exuberant businesswoman from Boston, Mass., hasn’t much riding experience but sits confidently on Trapper, a leggy chestnut thoroughbred.

Exertion causes a faint mist to form around the horses as they trudge up the rocky path through the forest. Some, including Trapper, stop to drink the first time we cross Tin Cup Creek. Maura urges him on, and he suddenly leaps up on the bank. “Woo!” Maura shouts, laughing. “I love my Trapper!” Later she tells me why she’s come.

A year and a half earlier, she had lost her husband after a five-year struggle with multiple myeloma. Two weeks later, her beloved sister died. “This is a reward I’ve given myself,” she said. “I’ve been through a lot and it’s time to move on. It’s sad though. My husband would have loved this place.”

She admitted she’d wanted to ride in the West since watching Brokeback Mountain. When her daughter told her about 100 Klicks for Chicks, she called the ranch and was reassured she didn’t have to be an experienced rider. “It was women only, so I had no problem coming on my own,” she said. (Which is not to say there are no men along. While we ride, some husbands explore the ranch, check out nearby Darby or a local ghost town or drive part of the Lewis and Clark Trail; another works on a writing project. They join us for dinner.)

Sheltered by tall fir trees, we file up the trail, talking and getting acquainted. Barbara Barrett, expertly handling feisty Cobalt, a blue roan quarter horse, makes sure everyone is having a good time. One rider tells me Barrett’s a lawyer and until recently, the U.S. ambassador to Finland – and an astronaut. (I find out later she’s the first civilian female to land in an F/A-18 Hornet on an aircraft carrier!) Husband Craig is the retired president and CEO of Intel Corporation. (A tongue-in-cheek letter at the ranch from the president of Nasdaq gives him permission to name his horse Nasdaq, provided Barrett assures said horse “will never crash and is Y2K compliant.”)

Talk fades as we cross an old rock-slide area. It’s stable, but the hillside drops away steeply. Our horses plod on steadfastly.

A light dusting of snow has sifted into the woods, and there’s beauty everywhere you look, whether along the creek or at a mountainside where an aspen dazzles in yellow fall glory. After three and half hours, someone asks, “Are we here?” and suddenly I smell a campfire. What follows is the most incredible outdoor fare: seared rainbow trout with lobster and corn sauce; venison stew with biscuits; Vermont quail with grapes; vegetable mac and cheese with Parmesan and Gruyère; huckleberry and apple cobbler; chocolate and pistachio cookies. All carried in to Tin Cup Lake on mules, just for us.

Snow starts falling as we pose for photos on the shore of the mountain lake. Back on the trail, the horses pick up the pace, anticipating the end of their work day. My butt hurts. (I’ll bring a pad for the saddle seat when I do this again.) Turned out in their pasture, apparently none the worse for today’s rocky footing, the horses begin grazing and will have a day of rest tomorrow.

The next morning, fresh horses await us below high rolling hills on the CB Ranch, where the topography differs completely from yesterday’s Bitterroot Forest. The wide-open vista feels liberating and we trot, finally stopping to take in the distant sight of the Bitterroots, with snowy Trapper Peak shining in the morning sun. Below us, clouds of mist hang in the cool air. White-tailed deer and elk abound (under the Barretts, the ranch has become a conservation area). Near the end of the day, Barbara confirms the huge dog-like footprint I’ve spotted in the mud is a wolf track. Yep, I think to myself, this is wild country.

The Bitterroots look so harsh and unforgiving that I’m amazed as Barbara tells the story of Sacagawea, a resilient young Shoshone woman who, in this rugged country acted as an interpreter for Lewis and Clark (the only woman on their expedition) and helped their mission succeed.

We lunch in comfort, however, (chili, salmon wraps and salad – and wine) at a former hunting lodge that’s now a residence for TCR staff. Before we leave the craggy site, we pose again beside our horses, hats (and my helmet) held high. Later I laugh as Barbara snaps us riding across a field toward her. Her horse plunges and dances but she’s oblivious, hanging off his side for the perfect photo. No wonder she made astronaut.

By the time we ride out from Triple Creek Ranch for our final 23 kilometres the next day, we’re old friends. We follow the west fork of the Bitterroot River and then head up a remote mountain road. Montana tests us with a range of weather this morning. It snows lightly, rains and even hails but it doesn’t dampen spirits. Trees almost screen the valley far below as we climb ever higher, but we’re confident now, trusting our horses. When we eat our packed lunches, sheltered by pine trees, the sun comes out and a rainbow hangs brightly above the broad valley.

But the bling doesn’t end on the trail.

Champagne and trays of mouth-watering hors d’oeuvres greet us at Elk Meadow, the Barrett’s ranch home. It’s the Chicks’ last night, so we are invited for cocktails. Constructed of lodge-pole pines and stone, the house matches the grandeur of the mountainside it faces. The Barretts’ passion for western art, expressed in sculpture, painting and photography throughout the ranch, virtually explodes here. It’s an eclectic mix that pays homage to a gritty Old West, as imagined by cowboys of the early 20th century.

“Before I show you around,” Barbara declares, “you all need to look more cowgirl.” She has a plan. We follow her to her closet where she pulls out custom-made cowboy hats and fancy leather jackets and vests. “You need some jewellery,” she tells one woman and plops a heavy silver and turquoise necklace over her head and then fastens a belt of the same stone around her waist. We’re a little giddy by the time we see possibly the largest private collection of work by Charles M. Russell, the great depicter of the early West.

Do we feel spoiled? Of course. But we’re also proud to have ridden 100 kilometres over rugged Montana terrain. As we say good night, there are hugs all around. We’ll be leaving in the morning, our bottoms a little saddle sore, but we’ve become CFFs – Cowgirl Friends Forever.

For more info, go to www.triplecreekranch.com