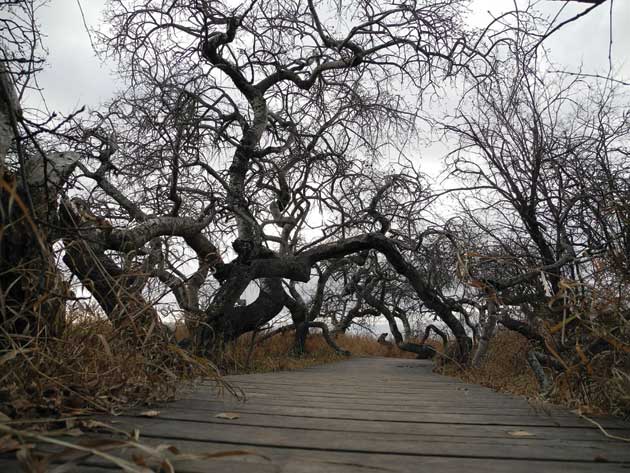 Peering out the window at the landmark Delta Hotel Bessborough in Saskatoon, watching traffic cross a stone bridge over the idyllic South Saskatchewan River, I thought I’d been transplanted to Europe.

A half-hour later, in my rental car, the city dissipates into a string of strip malls, homesteads, farmsteads and finally no steads at all, just endless flat fields of wheat. An ominous sky hovers above the autumn chill. My destination is a mysterious grove of deformed aspen trees that locals believe might be the freakiest trees in all of Canada. It begs investigation and provides a neat excuse to drive north into the prairie to see for myself. Crooked Bush is not on any maps. Once I drive through the small town of Hafford, I stop and ask for directions at a gas station. It looks as if it could easily be the location for the hit Canadian sitcom Corner Gas. Fortunately, the pimply kid behind the counter knows exactly what I’m looking for. Apparently, “Y’all ain’t the first stranger driving these parts lookin’ for trees.”

He hands me a one-page sheet containing information about Crooked Bush. “The Crooked Bush is a group of wild aspen trees that . . . twist, loop, and bend into the eeriest of forests. Courage of stone is necessary to visit it at night.” Fortunately, I’ve planned my visit during the day, although I score extra points for making it the week of Halloween. With no help from the pamphlet’s awfully confusing directions, I get lost within ten minutes of turning off the highway. When in doubt, follow those in front of you. I hope the pickup truck in question is also seeking the strange and unusual, and not, say, a tractor part. Ten minutes later, a lopsided wooden sign, written in what can best be described as witch scrawl, points right. A small clearing leads to a wooden boardwalk with a sign boldly proclaiming I’ve arrived at a legendary botanical mystery.

Exiting the car, hunched up against the cold, I take a few steps, stop and start yelling into the bitter wind. “Tim! Tim? Are you there?” Only director Tim Burton’s warped mind could possibly have created the trees that knot themselves over the boardwalk: silver-flecked branches with black scars, tangled and twisted, like the claws of a goblin or the dislocated legs of a giant spider. While university researchers have determined that some form of genetic mutation causes the trees, mystery still surrounds what led to the mutation in the first place and why forests of perfectly normal, straight aspen trees surround the grove.

Locals in the area have claimed to see UFOs, while others point fingers at meteorites, contaminated soil or overzealous imaginations. My favourite theory belongs to the farmer who claims to have seen an alien urinate in the area before the trees began to grow in the 1940s. This might explain another creepy forest in Poland, where pine trees are deformed at ninety-degree angles. After all, even little green men gotta go when they gotta go.

The boardwalk is not very long, and there are a few standout rock star trees that hog attention. Another couple arrive, telling me they’d heard about the trees for years. On Halloween, the Gothically inclined are known to throw creepy parties here, and they’re welcome to it. There’s definitely something strange in the air, an energy charged by aliens, meteors or an arboreal sense of humour. The chill is piercing my fleece, and Mrs. Esrock has run back to the car to catch up with her imagination.

A few minutes later, I join her for the return drive to Saskatoon, as the late afternoon sun peeks out from under the clouds, brightening up the wheat fields. The drive is straight, long and unmistakably beautiful. No verdict on whether Crooked Bush is in fact one of the most haunted spots in Canada. But for providing an excuse to drive into the prairie on a fun, hare-brained adventure, it deserves its spot on the National Bucket List.

Crooked Bush gets an extra point for being a natural phenomenon. If you’re feeling brave, grab a camera and head over to:

1. Plains of Abraham (Quebec City) Bump into the ghost of a mutilated soldier lately?

2. Blood Alley (Vancouver) Butchers once poured buckets of blood onto the street, famed for murder and mayhem.

3. Fairmont Empress (Victoria) Old hotels are as comfortable for ghosts as for the rest of us. See also: Fort Garry Hotel, Winnipeg; Banff Springs Hotel, Alta.

4. The Five Fishermen (Halifax) Other restaurants have ghosts, but this one was once a morgue for Titanic victims, who still freak the staff out.

5. Hockey Hall of Fame (housed in a former bank in Toronto) See the Stanley Cup and hear screams of delight – as well as those of a former bank teller who killed herself.

6. Ghost Train (St. Louis, Sask.) The beheaded victim of a train accident is allegedly behind the weird lights and noises on these phantom tracks.

7. Old Montreal Two hundred years ago, two prostitutes fought over a man and one chopped the other’s head off. Headless ghosts rule.

8. Ottawa Jail Hostel Spend a night in Jail [where the murderer of Thomas D’Arcy McGee, a Father of Confederation, met his maker].