North to the Baltic 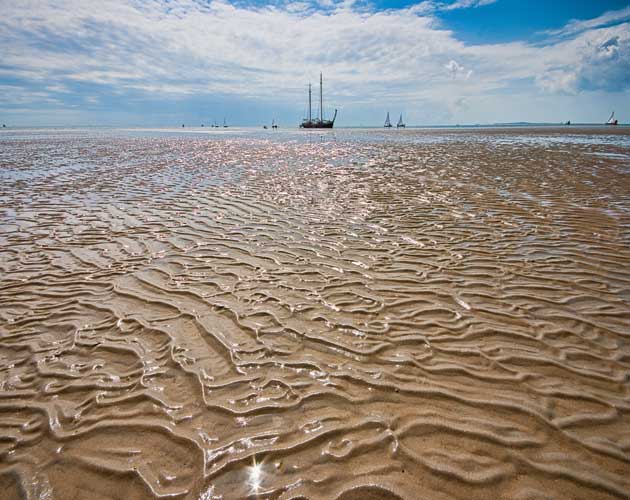 With each step,” our guide informs us, “you’re standing on thousands of marine animals – a living seabed.” We look down at our bare feet, toes wriggling in the mud flats of the Wadden Sea. And sure enough, there are crabs and mussels, starfish and hermit crabs – not to mention the worms: sandworms, lugworms, unnamed worms that I don’t want to know any better. Some of the more squeamish in our group slip on their shoes, but the rest of us continue squishing along behind Heike Niemann, our guide from the visitor centre. A marine biologist, she shows us a few of the 10,000 plant and animal species that call the tidal flats and wetlands at Cuxhaven on Germany’s North Sea coast home. A UNESCO World Heritage site since 2009, Wadden Sea is the world’s largest area of intertidal sand and mud flats.

Horse-drawn carriages pass us on their way to Neuwerk, following a trail marked by columns of brushwood that lead to the small island (population, 40). Neuwerk has belonged to Hamburg, about 100 kilometres to the east, for more than 700 years. At low tide, it’s a carriage ride or a three-hour hike to see the lighthouse – completed in 1369, Hamburg’s oldest existing building and its last standing fortification – and visit the five small inns on the island that welcome guests who are attracted to this unique setting, a stopover for up to 12 million migrating birds. When the tide is high, the island can only be reached by ship.

The tide will be in soon, and the flats can be dangerous without a guide.

We turn back to the wide sandy beach and the salt grass flats. But for those unwary enough to get caught by the  returning waters, there are lifesaving towers, like tree houses built in branchless trees, up which the hapless can climb to safety and wait for rescue.

Heike tells us about an unusual event held annually at Cuxhaven since 1902 – the Duhnen Mudflat Races, where horses and jockeys compete at low tide, while huge freighters continue to use the international shipping lane in the Elbe estuary behind them like a backdrop on a stage. As many as 30,000 spectators watch from a nearby dike.

But we won’t be here for the races or for the tide. We’re on a whirlwind tour of three UNESCO sites in five days and, as the saying goes, time and tide wait for no man – or woman.

Cuxhaven at the mouth of the River Elbe (the busiest waterway in the world) is Germany’s third oldest sea resort, dating back to the 13th century. Today, the population of 53,000 depends on tourism, the fishing industry and the port harbour for its livelihood. We combine all three with a seafood dinner at Franke’s Seestern at Albert-Ballin-Platz overlooking the freighters and cruise ships in the channel, whose announcements are often broadcast through the restaurant.

As we indulge in a welcoming appetizer – a pale froth of asparagus soup with macadamia oil – chef-owner Ulf Franke tells us how he met his wife through a Russian-German exchange program. Maria had worked in law, with the police and with the Secret Service back in Moscow. Fluent in 11 languages (English is not one of them), Maria helps us decipher the fresh seafood on the menu – like many northern German restaurants, there is no English menu – with the help of a poster depicting more than a dozen North Sea fish and much laughter.

Juxtaposed with Cuxhaven’s small-town ambience is the grandeur of Lübeck, about 130 kilometres east on the Baltic Sea. Instead of the river running through it as in Cuxhaven, the medieval city of Lübeck has the Trave River running around it. Once the Queen City of the Hanseatic League, the confederation of merchant cities that dominated the trade and politics along the Northern European coast from the 13th century until Columbus discovered America, Lübeck retains a sense of its glory days with decorative red brick Gothic architecture – one of the reasons it was the first North European city designated as a UNESCO World Heritage site in 1987.

Behind the grand merchants’ homes (built to the edge of the narrow winding streets for fire control) lies, for me, the appeal of this city: hidden alleyways packed with tiny Buden (“booths”) built by the upper classes to house the growing population of labourers during the 15th century. About 90 of what used to be 180 alleyways still exist – the smallest Buden measures 3.5 metres wide by 4.5 metres deep. But today, with exquisite courtyards, luscious rose gardens and charming renovations, the miniscule cottages are coveted real estate; some are available as holiday rentals.

In contrast to the tiny homes is the Haus der Schiffergesellschaft, the house of the Shipmasters Society, with red brick gables stepping up to the peak of the roof. Owned by the Brotherhood of Captains since it was built in 1535, the historic building is now a restaurant. The Shipmasters Society still meets here every Tuesday, sitting at the elevated table at the back of the room where the eldermen in days gone by sat and delivered instructions or reprimands to the skippers dining at tables assigned to them based on the harbours to which they were sailing. The isolated raised table of the elders overlooks the assembly hall with its solid oak plank banquet tables and long benches lit by ships’ lanterns, elevating them above the sailors who made the Hanseatic League so rich and powerful. Now, I simply wait for the long white-aproned waiters to deliver Frisian specialties while I marvel at the original carved model ships dating from 1607 that decorate the wood-lined room.

The drive east into the former East Germany is an eye-opener. What was a no-go zone during the Soviet occupation because of proximity by boat to Denmark, the area was largely untouched. Family estates and mansions were abandoned and have only been reclaimed since reunification by their owners or sold to hoteliers. We stop at Schlossgut Gross Schwansee, where an 18th-century castle has been refurbished and an eco-friendly hotel added; at Gutshaus Stellshagen, an organic farm and wellness spa has taken shape.

Then we are in Wismar, another Hanseatic League town. Its population may be less than Cuxhaven, but it supports the largest marketplace in northern Germany – 10,000 square metres (2-1/2 acres) – with buildings encircling it that range from 14th-century Gothic to 19th-century Romanesque revival. The intricate wrought iron fountain in the centre of the square dates from 1602. Film buffs may recognize it as the backdrop for Nosferatu, an unauthorized adaptation of Bram Stoker’s Dracula.

The preservation of the almost circular city layout since the Middle Ages has been recognized by UNESCO and is why it was designated as a World Heritage site. And instead of the Elbe or Trave rivers, Wismar’s link to the sea is the Grube, or canal, that flows straight through the city to the harbour, Originally, the city was completely encircled with moats, but now the Grube is the last remaining manmade waterway in a medieval town in these parts. This only serves to underscore that the historic richness of northern Germany is intricately bound to the waters that surround it.

Germany celebrates two major milestones this year. 2013 is the bicentennial of the birth of Richard Wagner, one of Germany’s most famous composers. Or travel the 600-kilometre Fairy Tale Road in honour of the 200th anniversary of the Brothers Grimm.