Volunteer Vacations: Go & Give Back in Guatemala 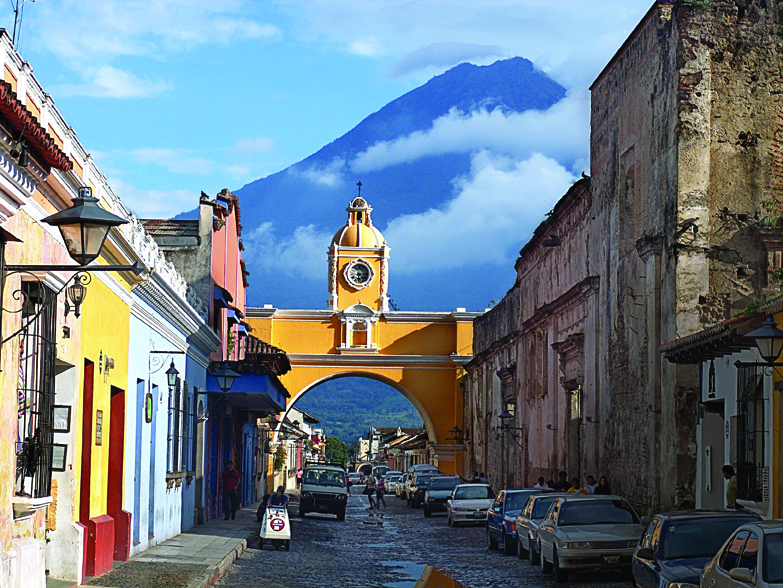 As I stood on the scaffolding, the faint breeze did little to combat the mid-afternoon sun. I wiped the sweat from my brow. Beyond the partially constructed concrete wall at which I toiled, a field of corn, black beans and carrots carpeted the landscape. Some 40 kilometres away, Volcan de Acatenango, the highest of Antigua, Guatemala’s four volcanoes, dominated the skyline.

Having volunteered to be part of the rebar crew that day, I’d spent hours securing small pieces of wire to intersecting reinforcement bars and finally was able to carry out the task while carrying on a conversation with the woman working beside me. Although she hailed from the eastern tip of Newfoundland’s Avalon Peninsula and I, the northwestern shore of Lake Ontario, we’d quickly found common ground.

“My husband’s job takes him away,” she told me, “usually for two weeks at a time.”

Could I have imagined having such an intimate conversation with a woman I barely knew? Frankly, the probability of forming friendships is what drew me to this trip.

As a single woman, I’m accustomed to travelling alone but often find that no matter how many miles from home I’ve managed to transport my body, I can’t get out of my head. Immersing myself in adrenaline-pumping activities helps – it’s hard to worry about the shape of one’s relationships or the size of one’s thighs when hot-air ballooning over New England or diving the Great Barrier Reef.

But such thrills are fleeting and, afterward, when I’m left to lollygag on the beach or wander through an art gallery, I crave the connection and camaraderie of friends. Of course, a holiday hook-up would be nice, but such thrills can also be fleeting or, conversely, too distracting.

Although I always strike up conversations with locals and fellow tourists when I travel, lately I’ve been looking for vacations that offer the potential of developing deeper bonds. This nine-day excursion to Guatemala – during which, along with 20 fellow Canadians, I spent the first five-and-a-half days helping to build a classroom and the remaining days soaking up the culture, cuisine and countryside – proved to be one of them.

When I first learned about it, I had a few concerns. Would the group be mostly composed of young do-gooders handy with a hammer and nails? Laurie Myles, one of the three Canadian women who founded GiveGetGo, the travel company offering the package, assured me that most of the folks heading down were big-hearted boomers with little construction experience.

“Are they all couples?” I pressed.

“There are some couples, yes,” she replied. “But a lot of people are travelling by themselves, most of them women.” A potential gaggle of gal pals, I thought. Count me in.

During the “build” part of the trip, we rose early each day for a buffet breakfast on the rooftop patio of our clean modest hotel. After a brief team meeting, we’d board passenger vans that carried us to Melody School, in Chimaltenango, about 45 minutes away. There, we’d meet with the foreman and his assistants who would keep us on track.

At noon, delicious fare prepared by women in the school’s kitchen was set out – such as caldo, a beef soup with potatoes, pumpkin, corn and guisquiles; pollo en joken, roast chicken in a green tomato sauce; and chile relleno, sweet peppers surrounded in egg and stuffed with meat and potatoes. One day, as part of a “learning lunch,” we gathered beneath a tree to watch a local woman demonstrate how to roll out tortillas from scratch.

Although we didn’t quit until 4 p.m., time flew. Throughout the site, people worked in small teams, executing various tasks from laying concrete blocks to pouring cement. Because we were allowed to pick our job and encouraged to change it up, I was surprised that the toughest gig – mixing cement – was among the most popular.

There was always half a dozen or so people gathered in a circle using spades to combine the endless bags of sand, wheelbarrows of gravel and buckets of water delivered to their feet. Interestingly, despite the arduous work, the cement crew rarely worked in silence – in fact, it was the mix-and-mingle hub of the work site.

No doubt, our efforts were made easier by the close proximity of the school children. When they were on a break, we were motivated by the sights of sounds of dozens of kids, ages three to nine, laughing and shrieking as they ran wild in the playground. When our tiny cheerleaders were in class, it was satisfying to know that the structure we were helping to build would make room for an additional 25 students.

The hardest part was when it came time to say good-bye to them. Even those who had opted to sponsor a child at $840, an act that would see a boy or girl through a full year of school, felt as if they should be doing more.

Igor Xoyon, a process engineer and the school’s principal, was gracious. “Education is the best way to break the cycle of poverty,” he said. No stranger to Canada, Igor’s family immigrated here in 1986 during Guatemala’s civil war. In recent years, both he and his mother, who was a teacher in Toronto, have returned to their homeland to help improve children’s access to and quality of education.

When we arrived back at our hotel that day, it was time to switch modes and abodes. Our new digs, Casa Santa Domingo, was stunning. Constructed within the ruins of a church and monastery, its stone corridors gave way to lush gardens and open spaces, a pool and spa, restaurants, shops and museums. Some members of the group expressed qualms about going from helping the poor to helping themselves to all things posh.

Others pointed out that because this part of the trip was not all-inclusive and only our accommodations had been pre-paid, we’d be putting money back into the economy through our meals and personal purchases. I wrestled with it, too, but I think that volunteering in general doesn’t have to be a selfless act, and it’s okay to get something out of it.

Located in Guatemala’s central highlands 1,500 metres above sea level, Antigua is a designated UNESCO World Heritage site, founded in the 16th century. Two centuries of volcano eruptions, hurricanes, tremors and the Santa Marta earthquakes of 1773 forced the powers that be to move the capital to what is now known as Guatemala City.

Left in ruins and mostly abandoned until the mid-1800s, coffee and grain production brought new interest to the region. Today, Antigua is a popular tourist town famous for its Spanish Baroque-influenced architecture, church ruins and original grid plan of 1543.

According to the UNESCO website, the grid serves as “one of the earliest and most outstanding examples of city planning in Latin America.”

According to me, the grid serves as one of the most outstanding examples of why it’s good to make friends when you travel. Instead of getting lost in the cobblestone streets by myself, there was always someone willing to get lost with me as we took in religious structures and monuments, plazas, art galleries, markets and the Santa Catalina arch beneath which a stretch of jade stores and chocolate shops, bars and boutiques beckoned.

There was always a group to enjoy a meal with – be it a quick bite at a local eatery or dinner at a fine-dining restaurant. Most of us signed up for the same full-day tour, a trek up Volcan Pacaya (an active volcano that has erupted since we were there!), followed by hours of relaxation at Santa Teresita, a hot springs spa.

Were the bonds formed deep enough to last once we all returned home? The folks from Newfoundland, most of whom were strangers prior to the trip, tell me they’ve had a few reunions, and we Ontarians recently got together for dinner when Igor, the school’s principal, was visiting Toronto. Although most of us hadn’t seen each other since the trip, we soon fell into our previous ways, filling each other in on everything from our kids to our careers to the latest best and worst moments of our love lives. We had been, after all, men and women sharing close quarters and a common goal, and in my experience, when those stars line up – be it in the confines of a kitchen or a corporation or at a construction site in Central America – the likelihood of getting down and dirty is high.

Go to www.givegetgo.ca for packages to Antigua, Guatemala, as well as Tanzania, Africa. For a video of the author in Guatamala, go here.