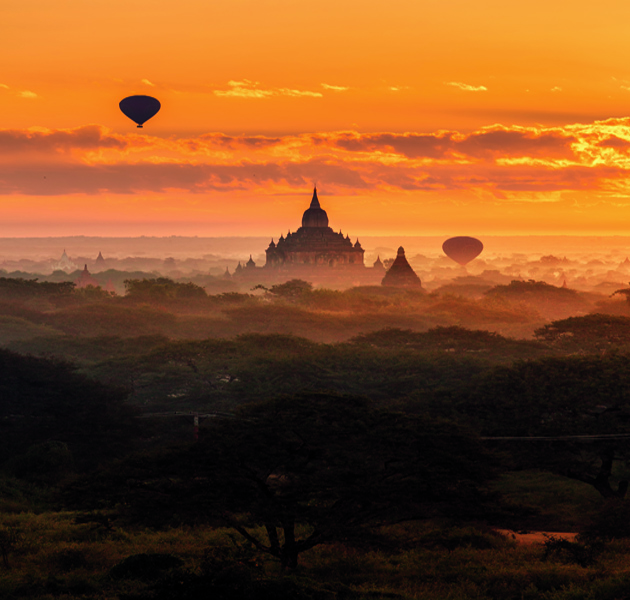 On the road to Mandalay, Vivian Vassos follows the sun.

It’s dawn over Inle Lake. A quiet cloaks the water, its surface barely cut by ripples. As the sun breaks free of the horizon, the water’s edge gives way to movement. Like a javelin through air, narrow vessels slice through the calm surf, making for the fish-rich pockets among the lily pad-studded waters. Fisherman steer these canoe-like longboats with a single oar, using it as a rudder, rather than a propeller. With one foot. As they balance on the bow—at its very tip—they perform a deft dance, wrapping a well-muscled leg around the oar, while their hands get busy preparing and then deploying the basket-shaped nets used by the local people for the daily catch.

This is Shan Province in central Myanmar. You may be more familiar with its colonial identity, Burma, but the Burmese are only one of seven main tribes that make up the country. The country itself has been riddled with political turmoil, but in 2012, Myanmar opened more widely to foreigners and to tourism.

“Well, technically,” explains Nyen Moe, our Myanmar-native travel director, who works with Trafalgar Tours, “it has always been open but, until that year, a foreign visitor was limited to a maximum stay of seven days.”

When I applied for my visa, it was valid for three months. But all I needed was a week (the near two-day flight-trek notwithstanding). In that time, I found a country on the verge, an emerging destination, a democracy on idle but poised to shift into gear, waiting to happen—and the desire to return. The beauty of these friendly people? Certainly. The stunning untouched countryside? Most definitely. The fact that it’s like Thailand before Thailand became a superstar destination? Possibly.

But Myanmar has its challenges: an infrastructure that’s been neglected and a lack of good roads through the country that make travelling by land a task.

Next: An itinerary to help us navigate the landscape

Children in the classroom at a monastic school in Yangon.

But Trafalgar has managed to create an itinerary that helps us navigate the landscape. We make the trek to a school the company supports as part of its Trafalgar Cares charitable arm in Yangon. While there, we are supplied with stacks of notebooks, pens and pencils and pencil sharpeners. The children are so disciplined that, rather than rushing the pile of goodies, they form a line and collect their gifts in quiet single file. Except for their smiles and their obvious excitement to have something new—simple tools to their academic success.

I enter a classroom. The children are reciting something written on the chalkboard. Nyen Moe tells me it is a set of learning rules. The teacher asks Nyen Moe to translate: she asks where I come from—the children want to know. I spy a map of the world on the classroom wall.

“Canada,” I say, and point to our massive land on the map. Some of the children repeat after me. “Canada,” they say.

To help illustrate how far I’ve come to meet them and to see their country, I point to Myanmar, a slice of land sandwiched between Bangladesh, India, China and Thailand, and then back to Canada. There are a few polite nods and ahs; but the distance is beyond comprehension to so many of them. No matter, their beaming faces seem to say, you’re here now, bearing gifts.

Most touring outfitters tend to navigate Myanmar by the river Irrawaddy, which takes travellers to storied Mandalay and the ancient temples of Bagan. But the waterway route that the Avalon Myanmar plies is unique.

It is near the top of the Irrawaddy, northeast, remote. So remote, you must take a domestic flight to Bhamo, almost bordering China, and board the ship there. But not before a few up close and personal experiences with the locals, made easier with our guide, Dorothy, who is a native of Bhamo. She is a ray of positive energy that only grows every day.

Tourism is new to these parts. And far from shying away from our strangeness, the locals revel in it. They call out, welcome us, ask to take photos—of us! And selfies with us. We are the novelty, the curiosity, the welcome but odd guest. It’s a role reversal that some in our party find uncomfortable, some amusing, but I’m enjoying it.

There are bits of English, hand gestures, giggles. Out of respect for the Myanmar culture, I am wearing a longhi, a traditional sarong that covers my knees and grazes my ankles. This is common dress for both women and men, and they want photos of me, dressed like them.

“You’ll be a star on the Internet,” one of them tells me after I indulge him with a smile and a pose for his phone’s camera. Not so remote after all, I think.

Avalon is the only river cruise company that traverses this part of the river, and that feeling of being out here, almost alone, just us and the locals, is a luxury in itself. The sun is our only constant. At dawn, we rise to give alms to the monks of the village where we’ve docked. As the light approaches, so do the monks, materializing out of the lingering mist, in a line. Saffron and ruby against grey and smoke. And the sun. They collect their day’s supper, and carry on, fading back into the last of the mist, as the sun eliminates the night.

The ship features just 18 suites, a floating boutique hotel with a top-notch cruise director-concierge and an eager-to-please staff that only adds to the “wow, we really do have this all to ourselves” factor. The ship is petite enough that, in some ports of call, she sidles right on up to the river’s banks; we walk down the gangway and are off on dry land adventures—elephant trekking, visiting a village school, watching potters throw their backs into their craft creating the much-sought-after oversized Burmese water jars, and then back to the ship and our sky deck perch to watch the day fade away, the sun setting over the river.

When, after three days of this bliss, we emerge out of the north and into the port of Bagan, we see where the rest of the (river cruising) world starts.

On this morning, we again rise before the sun. We disembark, and take a coach to the sacred temple grounds of the ancient royal city. Think Cambodia’s Angkor Wat, without the crowds. As we climb one of the pyramid’s steps with flashlights in hand, a sliver of fuchsia and gold splits the dark. Perched on one of the ledges, we sit in silence and watch the world wake from its slumber.

The reveal is more than just the sun. It is light surfacing, pouring over 100 miles of the Plain and crawling slowly up the backs of Buddhist temples, pagodas and monasteries; some of the 2,200 white, brick and gold that remain of what experts think numbered more than 10,000 and dating between the ninth and 13th century. Each throws a shade that defies description.

And the sun, rising and setting over a country that inspired me in ways that I did not expect. Because, for Myanmar, tomorrow really is a new day.

A version of this article appeared in the June 2016 issue with the headline, “Light Emerging: On the Road to Mandalay,” p. 62-64.