The Hague Welcomes Back The Girl With the Pearl Earring 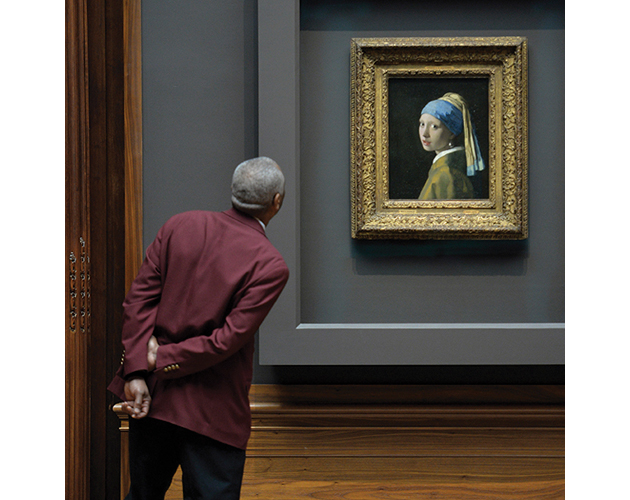 Arlene Stacey is in pursuit of an art mystery at The Hague.

It was all about The Girl—Girl with a Pearl Earring by Johannes Vermeer. She was finally back in The Hague in the Netherlands after two years of travelling the world while her home, the Mauritshuis, underwent a massive refurbishing. And what a welcome she received. At the former city palace’s reopening in June 2014, The Girl’s face adorned umbrellas carried by security guards; press passes bore the famous visage as did shopping bags and posters in store windows; shops offered discounts for anyone dressed in pearl grey.

The Royal Picture Gallery Mauritshuis, on the Hof-vijver, a pond in the centre of The Hague and next door to the Binnenhof, the Dutch parliament, houses about 250 world-famous Dutch and Flemish masters. The Girl inspired Tracy Chevalier’s historical novel upon which the Scarlett Johansson movie was based, but it was Carel Fabritius’s The Goldfinch that captivated me—and I hadn’t even read Donna Tartt’s book yet. The charming trompe l’oeil (below)—just larger than a sheet of paper—is one of about a dozen of his works that survived the 1654 Delft explosion, which ended the artist’s life. Other standouts include Rembrandt’s Anatomy Lesson, Paulus Potter’s The Bull and another Vermeer, View of Delft.

Given its extraordinary collection is set in one of the most important surviving examples of 17th-century architecture, earning Mauritshuis the title of the jewel box of Dutch museums, it is surprisingly not the only art game in town: Gemeentemuseum Den Haag has a permanent collection of Mondrian; Escher in het Paleis features almost all of M.C. Escher’s fantastical works; Panorama Mesdag invites visitors to step into the country’s largest painting (by Hendrik Willem Mesdag)—more than 14 metres high and 120 metres in circumference with a foreground of fake terrain that hides the painting’s base—and experience a 19th-century view of the fishing village of Scheveningen in 360 degrees.

And only a 20-minute tram ride away is the Vermeer Centre in Delft, which explores the mystery of the celebrated painter about whom so little is known. With his View of Delft, Vermeer painted his hometown from a spot on the Schie Canal south of the town, where today tourists can compare the current cityscape with Vermeer’s view in 1661.

But what of the provenance of The Girl? Like DaVinci’s Mona Lisa, there continues to be an air of mystery about her. Was she a maid in the Vermeer household, was she his daughter or is the painting a tronie, a 17th-century character study not of an individual but painted to showcase an artist’s skills and perhaps garner a lucrative commissioned portrait? Her exotic turban was not common Dutch headgear. And how would a young girl acquire such lustrous pearl earrings?

In The Hague, fleeting glimpses of The Girl were everywhere—the blue and yellow turban reflecting in windows, her wistful expression adorning everything from key chains to playing cards. But the sightings were deceptive. The Girl was finally safely home in her third-floor room at the Mauritshuis.

A version of this article appeared in the April 2015 issue with the headline, “Who’s That Girl?”