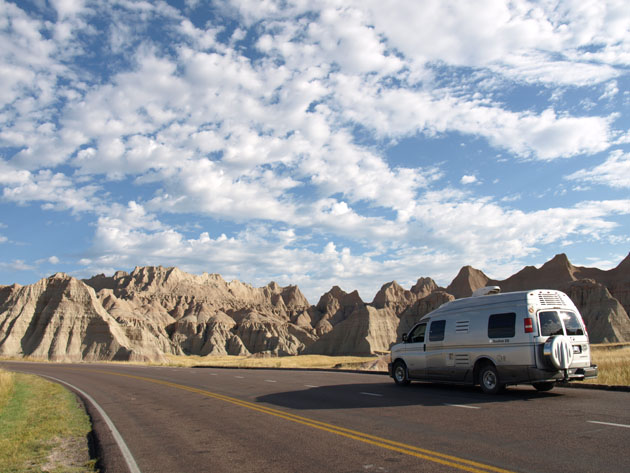 In 2016, the National Park Service celebrates its centenary, and we hit the road to explore some of America’s best national parks, thermal hot springs, and regional food and music. Here, the Badlands of South Dakota.

The South Dakota Badlands is one of those places you want to start your day. Early. With that in mind, we set our alarm, rolled from the bed to the front seats of the van (“10 seconds from sleep to on the road” is one of the RV lifestyle’s most addictive features). That’s how we found ourselves at the Big Badlands Overlook, sitting on the rim, breakfast in hand, watching the sunrise awaken the morning colours on the rock formations. This is a place of light and of quiet.

First, a Badlands primer. There are two forces at work here: deposition and erosion. Forty million years ago, this was a large, inland sea, home to strange creatures like alligators, the rhino-like titanothere and the hesperocyon (ancestor of the dog). Their remains are buried in mud turned to rock. The rocks and soil of the Badlands are renowned as one of the world’s richest mammal fossil beds. Just a few years ago, a seven-year-old girl discovered the skull of a prehistoric saber-tooth tiger, just steps from the Visitor Center.

Over time, layers of sandstone, river silts, clay and volcanic ash (including a smothering blanket 10-metres thick, thanks to the explosion of volcanoes to the west) built up an expansive, flat floodplain. Water began to cut through the landscape and erosion carved away the softer sediments, exposing a fantastic scene of buttes, canyons and towering spires.

In geologic terms, the Badlands are practically melting away. Erosion is ongoing at the rate of about one-third inch a year. At that speed, the buttes and sculpted spires will be gone in a mere 500,000 years (a blink of an eye on a geologic time scale) but you should get there sooner! We took our time along the park’s Scenic Loop Road skirting the long, narrow spine of the chief formation known as the Wall. You can see how the Badlands were deposited over successive eras by the bands of colours in the exposed rocks.

For example, the black band of Pierre Shale is the Badlands’ oldest formation: seawater that formed a black mud on the floor 75 million years ago. Or the red layers of the Brule Formation that are the leftovers of fossil beds formed 34 million years ago. Cut into by water and exposed, the effect is like slicing into the layers of a cake—the bands of colour are on full display. We had a sunny day and the colours popped.

For some visitors, the idea of eras and epochs and tens-of-millions of years creates thorny mental gymnastics. The park ranger fields bizarre questions like: “Who paints the colours on the rocks?”

Aside from all these gorgeous canyons and rock formations, the Badlands also protects the largest expanse of mixed-grass prairie in the National Park System. There are almost 60 species of tough prairie grasses and hundreds of types of wildflowers. Grasslands experience long spells of dry weather, but it is too wet to be a desert. It’s the perfect home for bison, prairie dogs (which seem numberless), mule deer, coyotes and bighorn sheep. Native Americans have hunted and roamed the Badlands for thousands of years. To the Lakota this land is a sacred, living, breathing entity. It was also home to the plains bison, one of their primary food sources. In the early 1800s there were an estimated 30-million of the massive creatures. In less than a century, non-Native buffalo hunters cut the herds to near extinction, fewer than a thousand in number. The bison are now the enduring symbol of the American West and one of the park’s protected species, creating traffic jams in the Badlands Wilderness Area.

We pulled out of the west end of the loop drive, tempted to turn around and do it all again. Perhaps bookending a day of travel by watching the colours of the sunset on the rocks.

Visit www.nps.gov/badl for information on the park and www.visittheusa.com for planning information.