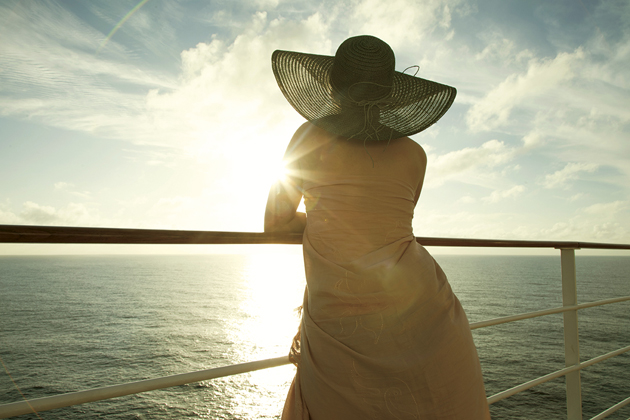 Get smarter at sea with these two European cruises that offer extraordinary experiences with education.

An education
The horn blasts, not once but twice. Louis Armstrong and his wonderful world starts streaming from the loudspeakers at a volume that defies ignoring on land or sea as the Serenity pulls away from her moor. It’s a graceful exit, suited to her name. The gentleman on the verandah next door sings along, even though it’s clear that English is not his mother tongue. Wonderful, indeed, as travel, like music, speaks a universal language. On Crystal Cruises’ Serenity, the local patois includes: unpack once (yet visit four countries that line the Eastern coast of the Mediterranean—England, France, Portugal and Spain); call your butler for breakfast—or your housekeeper to zip up that ball gown if you’re a singleton; and dinner seating is at a most civilized 8:30 p.m.

The sun is setting over Cadiz, one of Europe’s most ancient ports, a stronghold of Phoenicians and Romans before them. The ship’s pilot and captain spin the Serenity on her axis to bring her about in one smooth circular stroke that belies her size like some sort of ballerina pirouetting on water. The pilot takes to his waiting tugboat, heads back to the Spanish port, and we’re sailing away. Each port has its own pilot; a sailor who knows the port like the back of his hand, who can steer a ship the mid-size of the Serenity or even the world’s biggest, the Oasis of the Seas, through what seems like the eye of a needle on surf.

Yet, it’s on board away from port that holds some of the greatest fascination. The lecture series, part of the Crystal Visions Enrichment Program, goes beyond the typical what-to-do at each destination, and programmers realize their demographic’s interest in current affairs.

On Day 2, a former FBI profiler begins the first of his three talks. Clint Van Zandt was the FBI’s chief hostage negotiator and was instrumental in the cases of such mass murderers as the Unabomber and Oklahoma City bomber Timothy McVeigh, and the lead in the attempt to talk down Branch Davidian cult leader David Koresh. His in-depth behavioural science knowledge makes for creepy but somehow completely engrossing lectures, from Jack the Ripper to some of today’s most notorious criminals. It’s like a train wreck—you know it’s ghastly, but you just can’t turn away from the spectacle of it all.

Immediately following Van Zandt is retired Col. Ralf Vargas, the American former chief of the NATO Situation Center in Belgium. Here is a guy that was responsible during his tenure for worldwide crisis management, cool as a dandy in his spotless suit, delivering an enthusiastic and insightful view of where the Euro zone would go next. Not the stuff of serial killers but a killer insider perspective on geo-politics and what the world might expect next. At the time, he didn’t touch on Ukraine but did cover off the countries, including the Ukraine, that were seeking application to the European Union.

Don’t know how to use a computer but want to keep in touch with the grandkids via Facebook? There’s a class for that. Need a refresher course on email techniques? You can sign up for a session. Want to channel your inner Spielberg and learn how to make a film using your iPad? Yup, there’s an expert on board—presented by the University of Southern California School of Cinematic Arts, no less—who can teach you how to do that, too, as part of the ship’s Creative Learning Institute. And even though the ship is big enough to accommodate 1,070 passengers, it doesn’t ever feel crowded.

It’s this mix of experience and education that’s drawing more and more repeat cruisers. Gordon and Dianne Craig of Toronto have cruised with Crystal eight times and counting. “We like the mix of speakers and interesting itineraries,” says Dianne. (Another favourite for the couple is the Greece/Santorini itinerary.) “And we found this last one to have guests with more varied ages.” (Read: more active, with a diversity of ages, even with many guests over the age of 55.) The speakers are also a draw for the Craigs. “We were on a cruise with mystery writer Mary Higgins Clark and loved it,” says Dianne.

But the body needs a healthy feeding, too. This past November, the ship began a $17 million transformation, including a “living” garden wall and a chef’s herb garden, Nobu dishes featured on board are a part of the famed chef’s repertoire round the world and the company has added 70 Pure Rooms, which are fully hypo-allergenic, for acute allergy sufferers.

And a bit of play, too. For this cruise, the resident golf pro is also a resident Canadian. Bruce Murray has spent much of his teaching time on the greens of Vancouver, Montreal and Lakefield, near Peterborough, Ont., and now he’s retired and at home on the courses just outside Halifax—when he’s not at sea, of course. Murray, who is a 40-year veteran of the Canadian Pro Golfers Association (CPGA), leads daily lessons, with top-notch TaylorMade clubs, so no need to bring your own. And no, you don’t send the balls flying into the drink as if you’re firing them off the dock into the lake up north; there are catch nets, like batting practice boxes, discretely set up at one end of the ship. Fore! Sommelier studies
Long-limbed herons take to the sky, disturbed from their wetland home by our wake. Their snowy-white feathered wing tips defy gravity as they sail at eye level by our cabin’s window in stark contrast to the grey clouds that seem to be settling on the horizon.

We’re sailing too, aboard the AmaCerto on the river Danube between Budapest and Munich, with a focus on Austria, and its renowned Gewurztraminer and Gruner Vetliner grapes. Old World vines with history. The mornings, however, are firmly New World, with on board lectures featuring, on this river cruise, California winemakers Michael Honig and his wife, Stephanie. On most departures, the oeno-experts are from the state, but AmaWaterways has also featured hosts from Niagara and British Columbia, as well as Champagne experts and more from France.

We start when, apparently, the palate is at its best for tasting: 10 a.m. That’s right, wine at 10—a.m. It’s noon somewhere on the planet, so what the heck, we dive in, hoping an injection of resveratrol will justify our deviance from morning coffee. We learn that our palate is best now because we’ve yet to bombard it with food and drink that can block up its taste buds and then we learn about “the three faces of Sauvignon Blanc,” a popular white varietal. Who knew that one grape could produce so many different tastes? Well, we do now.

Sniff, swirl, sip, spit. Spit. Ah, that’s the secret to tasting and not becoming completely tanked before 1 p.m. We learn about wine’s complexities and, yes, you really can taste the many layers of the drink at that early time of day. The wines are in season—it’s late fall and the harvest is done in this part of the world.

Timing is everything, as Rudi Schreiner, the president and co-owner of AmaWaterways, and the host of this annual cruise, says. “Early November is not always a popular time to cruise in Europe,” he points out, as the weather is getting cooler, and it’s sandwiched between early fall’s temperate days and the Christmas markets that start up at the very end of November across the continent. So, what to do? Schreiner decided to create an itinerary that would keep people interested in onboard pursuits as much as shore excursions, combining vineyard visits in the old world with onboard tastings from the new. The themed cruises, labelled In Celebration of Wine join other such themes as Jewish Heritage, Holiday and Chocolate Connoisseurs cruises.

The wines on board are complemented by day trips to historic and traditional places where the fruit of the vine is appreciated, and doing it with the locals. An Austrian heuriger (wine tavern) is a great place to start: house-brewed vintages, roll-out-the-barrel entertainment, which leads to song and dance and conviviality with the town’s folk round out the fun. You can embark on bike tours, explore via guided walking tours or strike out on your own, as the beauty of a river cruise ship is that it’s sized just right to allow it to sidle up to the closest dock to the core of a city. And, with less than 200 people on board, disembarking and boarding are a breeze.

The company is also embedded in culinary principles, with Schreiner and his food and beverage manager both members of the Confrérie de la Chaîne des Rôtisseurs, recognized as one of the top and oldest gastronomic societies in the world. It was created in 1950, but its 13th-century provenance, the Royal Guild of Goose Roasters (I’m not making that up!), had accorded its own coat of arms by Louis XII of France. And membership does have its privileges, with the grant being recognized on all AMA’s ships in Europe. In keeping with the wine theme, all guests are treated to a special wine-paired menu created with Chaîne des Rôtisseurs in mind. The Honigs have selected the wines, two Sauvignon Blancs and two Cabernet Sauvignons, the red varietal.

The final wine lecture is a test of our senses but also takes some of the perceived snobbery out of wine tasting. Stephanie Honig advises not to be intimidated; some wine experts tend to describe aromas in a way that’s, well, way over most of our heads. “We’re taught how to read, write and count,” says Honig, “but not how to smell.” She leads us in a wine “sniffing” if you will, helping us to try to isolate aromas in the wines and giving us a bit of a layman’s guide to wine descriptors.

As our journey comes to a close, there’s another deviation to what our palate has been experiencing.

We’ve traversed from wine country to beer country. We’re in the tiny town of Vilshofen, Bavaria, on our final evening, where a mini Oktoberfest has been put together for the guests in port less than 50 metres from where the AmaCerto is docked. The mayor of the city is here, along with the local Oktoberfest queen, who gladly grabs up the men in the group to go for spin on the dance floor.

Bavarian folk music plays on into the night, more than a few steins of the local brew are consumed, which helps the once shy take a turn at cutting a rug. Roll out the barrel, indeed.

A version of this article appeared in the June 2014 issue with the headline, “Life at Sea.”