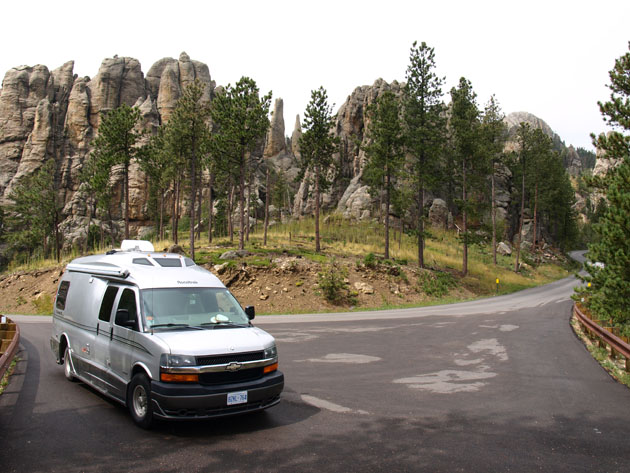 Both the Black Hills National Forest and Custer State Park continue their legacy of preserving the wildlife.

In 2016, the National Park Service celebrates its centenary. Josephine Matyas and Craig Jones, a musician-writer and a writer, are taking their expertise on the road.

Two words jump to mind in this beautiful part of South Dakota: wildlife and nature. The landscape of tall pine forests, open plains and lakes are home to thousands of species of plants and animals. We found ourselves surrounded by wildlife—we were definitely the visitors. These gently rolling hills and pine-blanketed forests are a natural habitat to bison, pronghorn antelope, elk and the omnipresent prairie dog.

Both the Black Hills National Forest and the smaller Custer State Park have an enduring legacy of preserving wildlife. In the early 1800s, the Western plains were home to up to 60 million bison (also called buffalo). By 1890, they’d been hunted out, their numbers slaughtered to fewer than a thousand. In the early 1900s, the bison were protected and now the healthy Black Hills herd is growing by an estimated 400 bison born each year. The prairie bison are iconic creatures, enduring symbols of the Old West that bring to mind strength and power. They are fundamentally linked to the culture of the Plains tribes, the root of all life. To the Cheyenne and Lakota Sioux, the Black Hills are an ancestral sacred place.

We found miles of hiking trails (most of them fine for on-leash dogs) and enough scenic drives to fill several days. Coming from the north (Mt. Rushmore is a popular stop before entering the state park), the twisty drive along Iron Mountain Road took us over curly “pigtail” bridges, through fragrant pine forests, around a corner and right into…a bison jam. When the largest land mammal in North America decides it wants to cross the road, you yield. When a whole herd take to the pavement, best to turn off the engine, bring out the camera and stay a safe distance (at two-metres tall and 900-kilos, they can run faster than a human and would pack a major punch).

Early morning is the best time to do the popular 29 km Wildlife Loop Drive through the state park. They say that 6-9 a.m. is prime time for spotting bison, pronghorn antelope, deer and elk. It seems that anytime is fine for the prairie dog! We loved the rolling grasslands and the dark pine forests that give the national forest its name.

A short drive to the south is Wind Cave National Park, one of the National Park Service’s smaller parks and the first one to protect a cave environment.

Park Interpreter Don Frankfort has been leading tours into the cave for almost five decades. He describes Wind Cave as “the biggest piece of Swiss cheese you’ve ever seen.”

Geologically, Wind Cave is one of the more complex cave systems in the world and one of the very few places to find the very rare, honeycomb-pattern boxwork formations. Visitors walk sets of stairs down the equivalent of 22 storeys below the surface as Frankfort points out the rock formations. There’s a distinct lack of stalagmites and stalactites, since there is little dripping water at Wind Cave.

“The Native Americans consider this a sacred place,” explained Frankfort. “To the Lakota, this is the place of the emergence of their people into the world above.”

After several days exploring, we turned north and took the dramatic Needles Highway out of the state park. We’d heard chatter in the campground about this famed roadway: low and narrow tunnels, twisty climbs and descents, steep drop-offs, spectacular scenery. It was all true.

The three tunnels cut into the rock had us pulling out a tape measure (the narrowest was about 2.5 metres wide) and hemming and hawing before deciding we could attempt it (turned out didn’t even need to pull in the side mirrors on our camper van…just). Along the way were towering spires of granite that give the highway its name. We stopped at Cathedral Spires Trail to hike up into the lush forest and take in a view of the spires up close.

In this part of the world the weather changes quickly. We started out in sunny weather with a daypack loaded with water and snacks and 90 minutes later watched as a bank of ominous, grey clouds rolled in over the rock faces. Getting caught in a mountain rain storm was not in our plans.

Back to the van before the skies opened up and we continued north. Next stop: mystical Devils Tower in Wyoming.

Don’t miss the excellent widescreen film at the Custer State Park Visitor Center. It is a wonderful—and beautifully photographed—overview of the area.

Visit www.travelsouthdakota.com for information on South Dakota and www.visittheusa.com for additional planning information.