The Western Flair of Northern Wyoming 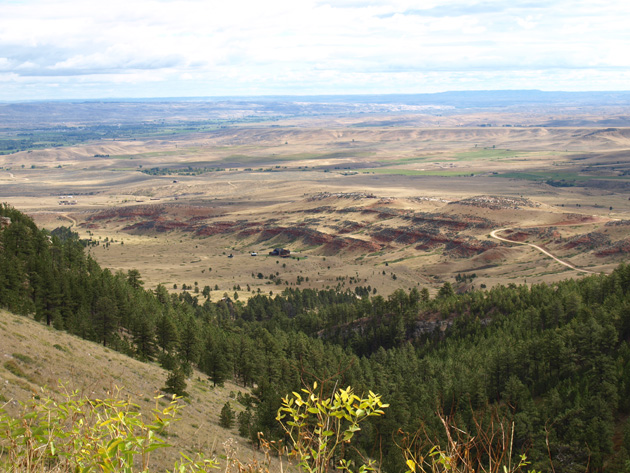 All photos courtesy of Josephine Matyas

In 2016, the U.S. National Park Service celebrates its centenary. Josephine Matyas and Craig Jones, a musician-writer and a writer, are taking their expertise on the road.

They call the geographic centre of the United States “flyover country”—far from the east and west coasts and, in the minds of some, a long way from anything worthwhile. What a misguided notion! On our road trip, states like South Dakota and Wyoming have been packed with interesting towns, friendly people, historic sites and some of the best scenery in the nation.

After leaving South Dakota, we pointed our camper van westward across northern Wyoming. Our eventual destination was Yellowstone National Park, but along the way we took a few days to explore towns stamped with authentic Western flair, a world-class museum and one national monument that boasts a Hollywood pedigree of its own.

Turning north off the interstate at Sundance (allegedly the namesake of the Sundance Kid, infamous outlaw and a member of Butch Cassidy’s Wild Bunch) we drove up and over a rise and first caught sight of Devils Tower, still many kilometres away. The magnificent tower of igneous rock stands 264 metres tall and, even from a distance, dominates the landscape. No wonder it caught the eye of director Steven Spielberg and was a pivotal part of his movie as the alien landing site in Close Encounters of the Third Kind.

In 1906, Devils Tower was established as the first national monument in America in order to protect it from commercial exploitation. Geologically, it formed about 50 million years ago when molten magma pushed upwards and into the layers of sedimentary rock. Over millions of years, erosion stripped away the softer sedimentary rock, exposing the harder cylinder of igneous rock.

Devils Tower has long been a sacred spot for many Northern Plains Indian tribes. The land surrounding the rock butte is made up of ponderosa pine forests, prairie grasslands and the weaving Belle Fourche River. This landscape provided the nomadic Native people of the Black Hills with the food and shelter they needed and a spiritual depth and guidance.

The bear is a character that is a part of many native storytelling. The Kiowa people believe the prominent vertical lines on the rock face look like a bear had clawed it while trying to chase some children up a giant tree stump. The children escaped its wrath, were borne into the sky and became the seven stars of the Pleiades.

It’s easy to get up close to the rock tower on the two-km Tower Trail, an easy hike around the base. Along the way, colourful prayer flags and small prayer bundles have been tied to the trees by Native visitors. There are fantastic views and the backside of the monument is less busy – it was a spot to breathe in the smell of the pines, watch the chipmunks scurry and listen to the sound of the wind through the trees.

Two authentic western towns caught our attention—Sheridan and Cody. We spent several nights at Pete D’s RV park, walking distance from downtown Sheridan. For those travelling with a dog, Peter D’s has the draw of a four-acre, fenced, off leash dog park.

Walking downtown Sheridan’s Main Street was a great way to get ready for the upcoming season of Longmire on Netflix, based on the novel series by Craig Johnson. Local author Johnson is a regular on the streets of Sheridan and it’s said he draws his characters from some of the residents. He certainly writes in beautiful detail about the surrounding Bighorn Mountains and Western sensibilities and lifestyle.

Sheridan feels genuine. The historic downtown district boasts 46 buildings on the National Historic Register, many lovingly restored to their former glory. Large brick storefronts are home to specialty shops like King’s Saddlery or the legendary Mint Bar, with its very cool neon sign outside, while inside photos of cows alongside local celebrities grace the walls. On almost every Main Street corner is a dynamic piece of Western-themed sculpture. Just off Main Street is Buffalo Bill Cody’s former stomping ground, the historic Sheridan Inn.

It was hard to leave Sheridan, but we needed to make our way west, up and over the beautiful Bighorn Mountains and into the town of Cody. The remote Bighorns were formed about 70 million years ago and are a favourite destination for outdoor enthusiasts looking for a hike, a rock climb or a horseback ride. Driving along the Scenic Byway up and over the Bighorns, we had to slow down for a wrangler herding cattle along the roadway. Every once in a while we spotted signs warning: “Open Range, Loose Stock.”

And tucked between the bighorns to the east and the Absaroka Range to the west, the town of Cody is named after William F. “Buffalo Bill” Cody, the famous army scout and entertainer who brought his Wild West show to the world. Buffalo Bill believed that by encountering authentic western things, people would come to understand and cherish the West. His story—and the story of the region—is told at the excellent Buffalo Bill Center of the West, a Smithsonian-affiliate facility divided into five smaller museums (natural history, Plains Indians, Western art, Buffalo Bill and firearms).

The natural history gallery (Draper Natural History Museum) was exactly the primer we needed on the Greater Yellowstone region. Hands-on displays brought sights, smells and sounds to life—from the howling of a pack of gray wolves to the smell of the pine forest.

The large gallery devoted to Buffalo Bill himself was equal parts well-curated pieces from the icon’s life and deeply-steeped American mythology about the man. There were carefully displayed pieces from the era—a cancelled Wells Fargo envelope, a set of telegraph keys, an embossed Pony Express saddle and the outfits favoured by Buffalo Bill himself.

We had little time to explore Cody but loved the authentic, welcoming Western feel of the town, the rodeo grounds on the outskirts and the world-class museum. It’s a destination we’ve marked in our journals as a place we’ll return.

Fun fact: Part of Close Encounters of the Third Kind were filmed on site at Devils Tower National Monument, but the majority of the scenes were constructed in a Goodyear hangar in Mobile, AL. The landing site was the biggest indoor film set ever built.

www.travelwyoming.com for information on Wyoming
www.visittheusa.com for additional planning information