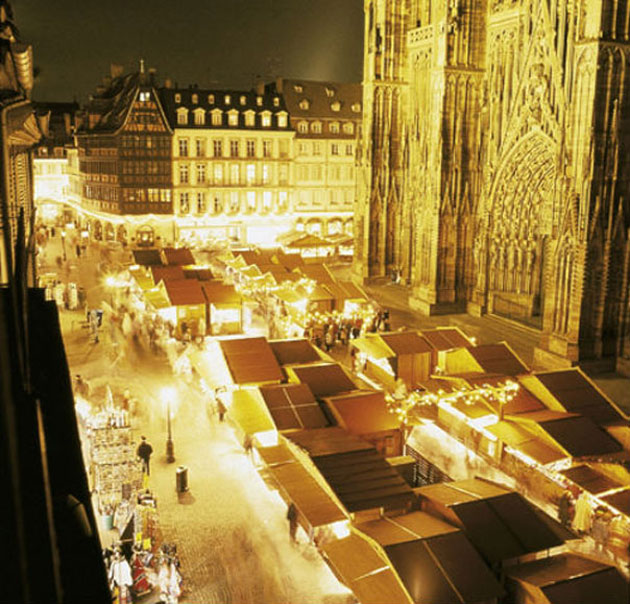 Nothing gets us in the spirit of the holidays like the festivities, food and shopping of a Christmas market. We look at some of the world’s best places to find them.

Shopping malls and big box stores may have good deals, but they can’t compare to the rich tradition and history behind Christmas markets. These magical winter wonderlands aren’t just about shopping for unique gifts. Lights, performances, music and merriment await — not to mention some of the season’s tastiest treats.

Here are some top markets around the world to add to your bucket list.

The tradition of Christkindlesmarkt got its start in German-speaking parts of Europe during the Middle Ages, so it’s only fitting that Germany still hosts some of the best. Nuremberg offers one of the largest and oldest markets in the country, adored by locals and tourists alike. On the Friday before Advent begins, crowds flock to the Old Town to see the Christkind open her market. This fair-haired, golden Christmas Angel is the bringer or gifts and the symbol of hope and good cheer — though she evolved out of an early Protestant tradition aimed at ousting old St. Nick.

Today she presides over a market dedicated to all things Christmas. Here, you’ll find nothing but ornaments, toys, mulled wine, crafts and traditional Christmas goodies at its more than 180 wooden booths (no non-Christmas distractions allowed!) If you’ve got a sweet tooth, don’t even try to resist the gingerbread — the city is famous for it.

Image courtesy of the City of Nuremberg.

NEXT: Tempt your taste buds at a market named after a traditional sweet.

Reputedly older than the market in Nuremberg, Dresden’s renowned Striezelmarkt boasts many attractions in addition to the shopping — including the world’s largest Erzgebirge step pyramid at 14.2 meters tall with its twirling carved figurines. The market gets its name from Striezel (now known as Stollen) — a rich, sweet bread filled with nuts and candied fruit. Every year the city celebrates this traditional fare with a Stollen Festival.

However, the Striezelmarkt is just one of many Christmas markets held throughout the city. You’d better pack a comfortable pair of shoes if you plan to hit the “Christmas Mile” — part of the downtown core that is transformed for Christmas every year. You don’t have to spent a lot to enjoy the season with scenic city walks and theatre to get you in the mood.

Not to be outdone by Nuremberg and Dresden, many other German cities host markets including Cologne, Berlin and Munich.

NEXT: Enjoy the tastes of Belgium — minus the city’s famous “sprouts”.

Belgian chocolate: need we say more? If you’re looking to indulge in the tastes the Christmas season has to offer, you can’t go wrong with Brussels famous cuisine. Still, travel experts have many reasons for calling it “the most original Christmas Market in Europe”. Stretching from the Grand Place and the Bourse to Place Sainte Catherine and the Marché aux Poissons (fish market), its 240 decorated wooden chalets offer a variety of crafts and tasty treats. Of course, you won’t be able to miss the illuminated Big Wheel — and you can rent skates to try out the 200 foot skating rink.

While it may be Belgium’s biggest market, it certainly isn’t the only one around. You’ll also find markets in places such as nearby Liege and Durbuy.

NEXT: Shop the Old Town Square and a place named for a famous king and saint.

Christmas markets are just one of many Czech traditions to enjoy when visiting the country. While smaller markets are scattered throughout its capital city, travellers say one of the must-see markets is in the Old Town Square. Surrounded by centuries of stunning architecture, the market lights up with its enormous, light-draped Christmas tree shipped in every year from the Krkonose mountains. Live concerts and plays on the market’s main stage area are also a popular draw.

Just five minutes away, you’ll find another famous market in Wenceslas Square — appropriately named after the legend of Wenceslas, the Duke of Bohemia, who received the titles of saint and king after his death for his unfailing generosity. Be on the look out for local crafts including Bohemian crystal, Czech glass and traditional embroidery. Enjoy the tastes of the season with the many varieties of traditional Czech cookies or trdelnik — a traditional pastry smothered in sugar and cinnamon.

For more information, see Christmas in Prague and MyCzechRepublic.com.

NEXT: Experience the magic of Advent in Austria.

Just in case Vienna’s Baroque city squares weren’t pretty enough, see what happens when they’re transformed into magical Christmas markets. Out front of City Hall, the “Magic of Advent” Christmas Market is arguably the oldest market in town dating all the way back to 1298. In addition to over 140 stalls, there is a Christkindl Workshop where the youngsters can craft gifts for their loved ones.

Vienna’s most scenic market is held in front of the splendid Schönbrunn Palace, the former imperial residences, and there the festivities continue well into the New Year. You’ll find the Spittelberg Christmas Market tucked among the city’s museums, and the Old Viennese Christmas Market on Freyung is the place to go for old-fashioned yuletide tradition. Be on the look out for traditional crafts such as blown glass and carved ornaments or toys.

For a full list of markets and Christmas events, visit www.wien.info and www.austria.info.

Naturally, Christmas markets can be found throughout Austria — including some notable markets in beautiful Salzburg.

NEXT: Shop, sample and skate in the “Christmas Capital”.

Forget Paris! This city claims to be the “Christmas Capital” because of its markets, saying it started the tradition that spread throughout Europe. (Legend has it the Christmas tree has its roots in Alsace too.) You’ll find much of the action out front of the city’s stunning Cathedral de Notre-Dame, where a market has been held most years since 1570. Glowing lights, good food and a wide variety of Christmas ornaments await shoppers as they have for hundreds of years. You can even ice skate beneath the cathedral.

Today, there are 12 markets in the city with dazzling displays of lights and many Christmas activities for all ages. Be on the lookout for books and prints — Strasbourg is the birthplace of the printing press, and proud of its heritage.

For more information, visit and www.otstrasbourg.fr and Christmas in Strasbourg.

NEXT: A Christmas celebration at Europe’s oldest amusement park..

For the young at heart, what better place to celebrate Christmas than Europe’s oldest amusement park? In recent years, Tivoli Gardens has doubled its Christmas fun with two themes instead of one. The new Nordic theme embraces Norwegian, Swedish and Danish traditions with woodland houses and trees decked out in twinkling lights and bells.  The classic Christmas in Tivoli theme transforms part of the park into a Russian fairytale village – complete with a miniature St. Basil’s Cathedral. Along with the market stalls featuring Scandinavian crafts and Christmas goodies, visitors can enjoy six Christmas-themed rides.

Of course, Tivoli isn’t the only part of town getting dolled up for the holidays. Another popular stop is the Christmas market in Nyhavn, along the city’s old harbour. Nearby towns such as Elsinore hold their own markets and fairs this time of year too.

For more information, see VisitCopenhagen.com and the Tivoli Gardens website.

NEXT: A lesser-travelled destination for a white Christmas.

Looking for a destination that isn’t on everyone else’s wish lists? Though Estonia’s Tallinna Jõuluturg has only been running since the country regained sovereignty in 1991, you won’t find the atmosphere or offerings lacking. The market is held in the historic cobble-stoned Old Town Hall Square and its decorated stalls are presided over by an enormous Christmas tree. Thanks to its latitude, a white Christmas is practically a guaranteed and an exhibition of snow sculptures adds to that “Winter Wonderland” feel.

If you’re travelling with youngsters, crafts, contests and a host of events will help get them in the spirit — as will a visit from Santa. Children can visit Santa’s post office box and feed real reindeer.

Didn’t make it before December 25? As Christmas occurs later by the Russian Orthodox calendar, you’ll find the market open well into January.

What about closer to home? We may not have markets on a grand scale as in Europe, but you’ll find Christmas markets across the country — including Vancouver, Toronto and Quebec City. The nod for the oldest market in Canada goes to Kitchener, where the area’s German heritage shines every year with the four-day Christkindlmarkt in December.

Naturally, it would be impossible to include every notable Christmas market in a single article. Use these ideas as inspiration for your own trips — or perhaps a little Yuletide daydreaming.

Does your area have a Christmas market we should know about? Share with us in the comments.