Turn Back Time on Mackinac Island 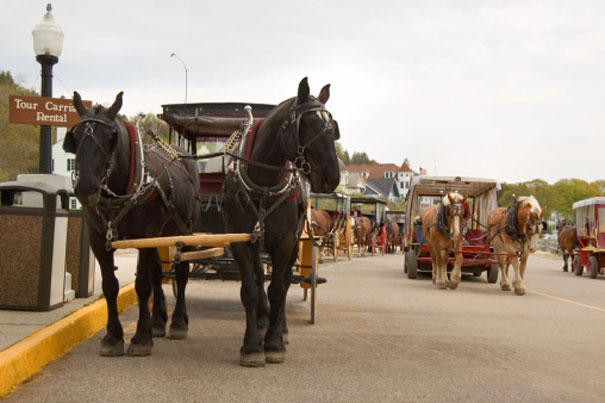 No need to worry about galloping gas prices on an island that literally runs on horsepower.

You might say Mackinac Island, Mi. conspires to escape the present — or maybe it’s more about embracing the past.

Cars (non-emergency) are forbidden by local ordinance. Instead, horses’ hooves set the pace with bustle defined by grand ladies in period costumes, carriage drivers in top hats and tails or a soldier attired in gold braid and epaulets and shiny boots. This picturesque island, nestled in the straits of Mackinac where Lake Michigan and Lake Huron meet, harks back to another era. Once a fishing ground for natives, Mackinac Island (MACK-in-awe) attracted French voyageurs and fur traders. The island eventually became a strategic military outpost during the War of 1812, with a battle fought near the end of the two-year war. Home to about 600 year-round residents, the island is a popular summer getaway, known for its festive atmosphere, magnificent Victorian homes, and the preserved charm of an era gone-by. Since cars are not permitted, walking, pedalling and horse-drawn shuttles are the main ways to explore the eight-mile island.

Commerce along the old-fashioned storefronts of Main Street consists of hotel porters shuttling suitcases from the ferry dock, bags stacked perilously high in bicycle baskets. Or pushcarts piled with new mattresses and boxes of food supplies secured by bungee cords.

And everywhere is the aroma of boiling sugar, with five fudge companies each operating several shops downtown. Refreshingly absent are chain stores, and in the town’s centre, costumed workers demonstrate hearth cooking techniques while others pound iron at Benjamin Blacksmith Shop. And visitors can take a peek inside the building where John Jacob Astor made his first million dollars trading furs. On a cliff above Haldimand Bay and the luxurious yachts bobbing in the harbour, the costumed soldiers at Fort Mackinac engage in canon displays and fife-and-drum playing. The grand dame of the island, however, is the Grand Hotel, a 19th century treasure with a stunning 700-foot-long veranda. An abundance of charming Victorian hotels and bed-and- breakfasts also offer accommodations downtown. Visitors to the island can also opt to stay on the mainland and ferry over for the day. But for day-trippers and those lingering longer, the real draw perhaps lies beyond the town. About 80 per cent of the island is Mackinac Island State Park with dense, fragrant forests and hundreds of varieties of lilac trees and wildflowers. To take in the island’s abundant nature, pedal the flat 8.2-mile shoreline road and perhaps pause to climb Arch Rock or Sugar Loaf or take an invigorating swim near Point aux Pins. Or you might hike deep into the forest where there are no other tourists and not even the clip-clopping of hooves, only the timeless whisper of the wind blowing through the trees.

And as you watch a dense fog rolling in from the open lake, the world you left behind seems far away indeed.