7 Most Bizarre Beaches in the World 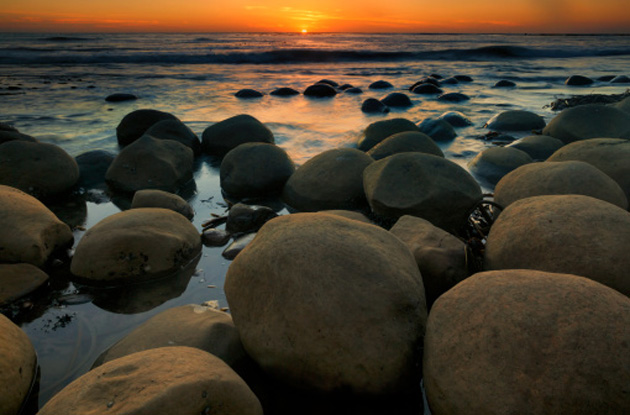 Disappearing beaches? A sun-worshipping dragon? These beach vacations go beyond the typical tropical paradise of sun, sea and sand

When searching for that perfect place in the sun, most of us envision a hammock swinging beneath towering palm trees and white sand beaches stretched along a shimmering sea. But the world’s beaches come in a vast assortment of shapes, sizes and locations — and, at times, are known to attract strange visitors indeed. Here. some of the world’s most unusual beaches.

Now you see it, now you don’t! In a harbour just outside of Zanzibar ‘s historic Stone Town, beautiful sugar-white sandbars emerge from the sea at low tide. Your hotel can arrange a wooden skiff or dhow to sail you to your own private desert island where you can picnic, swim, and search for the moonstones, zircons and garnets that occasionally wash up on shore. But keep an eye on the tide: once it comes in, your island getaway becomes a paradise lost — at least until the following day.

This seaside hotspot comes as a surprise to many – after all, Iceland doesn’t normally come to mind when planning a balmy beach getaway. This far north, ocean temperatures generally get no warmer than a chilly 10-degrees C (50-degrees F). But in the capital city of Reykjavik (which has the only beach in the country suitable for swimming) the seawater of the protected cove is warmed by a geothermal heating system to a more comfortable 21-degrees C (70-degrees F) during the summer months.

Still a little too chilly for you? Warm-up by taking a soak in nearby ‘hot pots’ — pools filled with 37-degrees C (100-degree F) freshwater.

This beach, located about seven miles north of Liverpool, may at first glance be mistaken for a vast nudist colony (and a brave one at that, considering the less than temperate British location). But the 100 life-like, anatomically correct human figures facing stoically out to sea, are, in fact, cast from iron. The surreal scene — called Another Place — is the work of English sculptor Anthony Gormley, who used a cast of his own naked body for the installation. The statues — many of which are now covered with barnacles because they become submerged at high tide — were previously exhibited in Norway, Germany, and Belgium.

This wacky indoor ‘tropical’ getaway just south of Berlin is actually housed in a former airship hangar. Covering the area of about eight football fields, Tropical Islands is the world’s largest indoor water park and rain forest. (The hall is 32 stories high, which means the Statue of Liberty could stand upright in it). No matter the weather, sun-seekers can build castles in the sand, lounge beneath palm trees along the 650-foot-long beach, take a refreshing dip in the “sea,” or even catch up on their tan (part of the roof is made of transparent foil). Other amenities include an 82-foot waterslide, fitness centre, mini-golf course and evening entertainment.

Calling all would-be dragon-slayers! This artificial strip of sand on the south side of Hong Kong Island is known as one of the city’s most popular beaches, and according to legend, a favourite sunspot of a local dragon.

While shark nets and floating platforms have been installed for the benefit of the swimmers, the needs of the dragon were also taken into account during the construction of a 37-story residential building on the hillside behind the beach. Since legend holds that the dragon lives at the top of a nearby mountain, a feng shui master warned that the building would block the dragon’s view of the shore. So to mollify the creature — and at the same time avoid a lot of bad luck — a large hole was cut out of the tower’s center.

Repulse Bay Beach is also known for the elaborate statues of Chinese sea goddesses at the Kwun Yam Shrine. For good fortune, throw a coin into the mouth of the fish statue, and while you’re at it, cross Longevity Bridge to add three days to your life.

A beach built on a beach? The huge San Alfonso del Mar beach faces the Pacific Ocean, but this did not hinder the construction of the world’s largest swimming pool directly along side the sea. And why not? The pool’s balmy 26-degree C (79-degree F) water temperature is more accommodating than Mother Nature’s 17-degree C (63-degree F) seawater nearby, not to mention the ocean’s dangerous waves and currents.

Resembling a modern Mayan city, the Chilean resort boasts pyramid-like apartment buildings that tower above the colossal saltwater pool — which, by the way, is just under 1 kilometre or over a half a mile long and holds an impressive 17.4 million litres (or 66 million gallons) of water.

It may look like an art installation, but Bowling Ball Beach in northern California’s Mendocino County is completely natural. With the shifting of the tides, round boulders — roughly 1-1.5 meters or four to five feet in diameter — can be viewed poking out of the water until the sand is covered with neat rows of these eerie looking balls.

It may appear somewhat otherworldly, but apparently there’s a perfectly logical explanation for the huge ‘bowling balls’ that appear along this remote Californian coastline. Known as concretions, the beach’s mineral-based spheres have been able to resist the endless lashing of the Pacific, while the Cenozoic mudstone that once surrounded them has eroded away to form the cliffs that line the shore.

Have you visited any unusual, weird or wonderful beach destinations? Let us know in the comments!