3 Reasons Why Utah Is a Road Tripper’s Dream 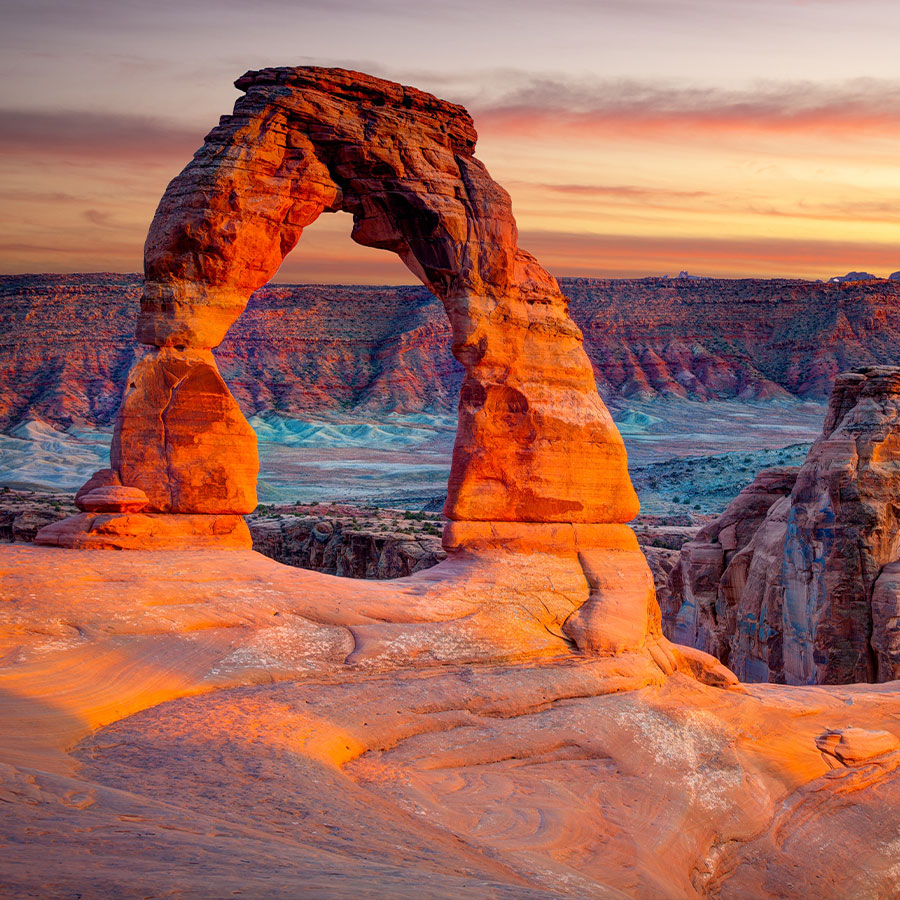 It’s impossible to drive through the Beehive State without bumping into a major national park or a national monument. Our timeframe only allowed us to explore the east side of the state. We made an unscheduled stop at Dinosaur National Monument, then played for almost a week in the red rocks of Arches National Park, Canyonlands National Park and Dead Horse Point State Park. The other Utah heavyweights—including Zion, Bryce, Capitol Reef—will have to wait until another trip.

Straddling the border of Utah and Colorado, this expansive, remote site is the only National Park site established to protect dinosaur remains. What makes DNM special are the fossil-rich rocks, creating one of the best-known windows into the world of Upper Jurassic-era dinosaurs (a golden age for the biggies). The monument’s protected excavation site holds fossils from 400 different dinosaurs.

Why such a concentration in one spot?

Dinosaurs roamed this area for more than 100 million years. At one time there was an ancient river that flowed across a vast plain. A long drought killed many dinosaurs and their remains collected in and near the dry river channel. When extensive rains came, the bones tumbled together into a “dinosaur log jam.” The bounty of their fossilized remains was discovered in the early 1900s and, rather than being removed, a building was constructed around the dig site. The Quarry Exhibit is considered one of the best places in the world to see dinosaur bones in place. The Fossil Discovery Trail connects the parking lot to the Quarry Exhibit and is a hands-on way to get out and see the region’s geologic uplift up close.

It’s a rugged, harsh landscape; one that was deemed uninhabitable by most farmers and ranchers looking to set roots in the American West. The wild canyons of the parklands expose more than one-billion years of rock layers that have been folded, tilted, faulted and then shaped by the power of the river waters. This northern borderland of Utah and Colorado was one of the last places in the continental U.S. to be settled by European Americans. But for the modern day road tripper looking for dramatic scenery, it’s nirvana.

There’s a strategy to enjoying Arches, one of the most popular national parks in the state: get up and get in early. Wait until 9am and the line of cars at the entry gate is backed up onto the highway, the trails are crowded and the heat of the sun beats down. We were there—our headlights guiding the way to the trailhead—and on the trail to watch sunrise, stop for a breakfast snack and wave hello to the line of hikers starting out just as we were finishing up a gloriously uncrowded morning outing.

These rocks started layering down around 300 million years ago; over time geologic forces and the harsh elements of erosion have shaped an extremely fragile desert environment of graceful arches, balanced rocks, deep red rock canyons and sculpted dunes. Erosion continues, making this a continuously changing landscape.

It’s the sweeping red sandstone arches that draws people to this magical place. There are more than 2000 arches inside the park (the largest concentration of natural arches on Earth). Rock arches are rare in nature’s architecture and their time span is short (geologically speaking). Sooner or later the delicate sweep of rock cracks, breaks and tumbles.

The path along Devils Garden Trail wove through strange red rock formations fashioned by water and time. It was the dramatic uplift, sagging and weathering of the brittle Colorado Plateau sandstone that resulted in a staggering number of fins, pinnacles, alcoves and arches. There were points where we had to shimmy along narrow bulges of slick rock and then scramble to outcrops where we were rewarded with an endless vista of tall, thin walls (fins), towering hoodoos and the park’s namesake arches.

We took our time hiking—time is something closely tied to Arches, the park ranger at the Visitor Center was quick to remind us: “Water and time sculpted this landscape. Arches are an erosional product of time. Given enough time, they will all eventually collapse.”

It was another early alarm clock day as we set off for Canyonlands National Park. We wanted to follow our Arches strategy: get in early, avoid the crowds.

Canyonlands is that little bit further out from Moab than Arches (35 minutes vs. five minutes) and it seems many fewer people are willing to make the extra drive. It tuned out there were no crowds, no lineups, lots of space on the hiking trails.

This part of Utah—at Canyonlands—is what writer and environmentalist Edward Abbey called the “most arid, most hostile, most lonesome, most grim, bleak, barren, desolate and savage quarter of the state of Utah—the best part by far.”

It’s an improbable landscape. A timeless vista of cliffs and canyons formed by the ongoing force of erosion.

At its geologic base is an ancient ocean that has been dry for millions of years. This was once an area of shallow seas that advanced and retreated many times, leaving behind accumulating layers of sand and silt that compacted into rock layers. Those great blocks of red rock weathered and fractured into the rock wilderness of fins, needles and arches. The mighty Colorado and Green Rivers converge in the park, the power of their waters adding to the creation of the canyons.

While Arches has dramatic landforms that are close up and personal, Canyonlands National Park is all about the dramatic vistas. The short roadways through the park are peppered with lookouts where you can just park and gaze or head off down a trail to explore (alas, like most of the national parks, dogs are not allowed on the trails).

We hiked the short loop to Mesa Arch (one of the most popular trails in the park) and were rewarded with views over Buck and Gooseberry Canyons. Further along the roadway, was another stop for the hike to Upheaval Dome, where geologists are still debating its formation—collapsed salt dome formation or cataclysmic meteor impact.

The otherworldly beauty of this area has not been lost on filmmakers. Thelma and Louise took a “last flight” from a canyon edge; the criminals on Con Air viewed it from above and Charlton Heston gazed over the sea of red rock canyons in the epic film, The Greatest Story Ever Told.

Visit this website for information and links to all of Utah’s National Park sites, as well as COVID-19 travel guidance for visitors to the state.