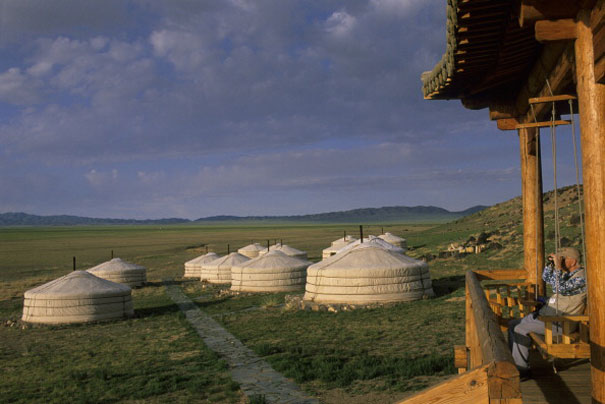 If you’re looking for adventure or over-the-top luxury, here are some of the world’s truly original lodgings

Adventure and self-directed travel are on the rise with many travellers choosing destinations that are off the beaten track. In fact, Sun Media reports that “a sense of adventure” was rated by boomers as one of the top motivating factors for choosing a travel destination, in a recent national survey of Canadian adults.

If you’ve already “done” London or Paris, or if you’re looking for a truly original destination, Gayot.com offers its top 10 picks of the most unique lodging on (and under) earth.

BARON ISLAND, MURCIA, SPAIN
FRANK LLOYD WRIGHT WATCHTOWER
Privacy fit for a king. Baron Island, 30 minutes off the southern coast of Spain, is the former royal hunting ground of King Amadeo of Saboya. This exclusive 220-acre nature reserve offers a five-floor watchtower built in the 1950s by Frank Lloyd Wright. Other accommodations include cottages and a hunting lodge. You also get your own staff, tennis court and beach equipped for water sports such as windsurfing, snorkelling, water skiing, and hobie cat sailing.

KERALA, INDIA
GREEN MAGIC TREEHOUSE RESORT
For kids at heart. Drive through coffee, cardamom and pepper plantations to arrive at your very own tree fort. Green Magic Treehouse Resort offers a choice of two tree forts, one at 90 feet off the ground and another at 100. Built by Paniya tribesmen using local materials and indigenous techniques, the double-decker structures (bedrooms are on the upper level, reached by winding wooden staircases) feature wraparound verandas, toilets, (cold) showers and draperies of forest canopy. Be forewarned, however: the houses do sometimes sway. An eco-lodge is also available for those preferring to keep their feet firmly planted on the ground.

JUKKASJRVI, SWEDEN
ICE HOTEL
Very cool. Built entirely of snow and ice, and rebuilt every winter, the Ice Hotel features a movie room, chapel and bedrooms with frozen beds. But not to worry: the hotel provides specially designed thermal sleeping bags on reindeer pelts to keep you warm. For additional warmth, you may also want to hit the Absolut Icebar, where drinks are served in ice glasses.

KEY LARGO, FLORIDA
JULES’ UNDERSEA LODGE
If you “want to be — under the sea.” Jules’ Undersea Lodge is an authentic underwater research habitat and hotel, inspired by the fantastical world of Jules Verne. Certified divers can earn an Aquanaut certificate while enjoying unlimited diving. And when it’s time to relax, enjoy a gourmet dinner prepared by the hotel’s “mer-chef.”

FARMINGTON, NEW MEXICO
KOKOPELLI’S CAVE BED & BREAKFAST
Down to earth — literally. Kokopelli’s Cave Bed & Breakfast was originally built as a geological research office. The man made dwelling, reminiscent of the nearby Anasazi cliff ruins, is carved into a cliff face 70 feet below the mesa top. Creature comforts include Jacuzzis, stylish Southwest furnishings and a deck for incredible stargazing. The property also offers a traditional ceremonial kiva.

LLANDUDNO, NORTH WALES
THE LIGHTHOUSE
Not your typical lighthouse. Erected in 1862, this lighthouse resembles a cliff-top castle. It worked as a functioning lighthouse, however, until 1985 when it was converted into a Bed and Breakfast with startling views over the Irish Sea. The panorama from the breakfast room overlooks a 110-meter vertical cliff drop.

ROBINSON CRUSOE ISLAND, CHILE
ROBINSON CRUSOE’S CAVE
For fans of Robinson Crusoe. Stay the night in the former abode of Alexander Selkirk — who also happened to be the inspiration for Daniel Defoe’s Robinson Crusoe. Situated off the coast of Chile, Robinson Crusoe Island (formerly Mas-A-Tierra) offers intrepid travellers an opportunity to sleep in the cave where Selkirk survived for over four years before he was rescued in 1709.

WELIGAMA, SRI LANKA
TAPROBANE ISLAND
A private paradise. This two and a half acre private island boasts only one luxurious, Palladian-style villa which was built in the 1920s by a count (the descendant of one of Napoleon’s generals) and later owned by writer Paul Bowles (who wrote Spider House here). The island is a mere wading distance from the shore of Sri Lanka — or on the other hand, you could choose to arrive by elephant. The concept of the villa was to avoid interiors, resulting in a sea view from almost every point in the house. The island is staffed with houseboys, stewards, a cook, a gardener and security.

GOBI, MONGOLIA
THREE CAMEL LODGE
For the nomad in you. Sleep in the traditional felt tents (gers) inhabited by nomadic Mongolian farmers at Three Camel Lodge. Equipped with wood stoves and simple furnishings, the tents are erected in the shadow of a 47-million year old volcanic outcrop in Gurvansaikhan National Park. This environmentally and culturally responsible camp also offers a beautiful lodge where you can recover from a day of camel trekking and other such endeavors.

LES CERNIERS, SWITZERLAND
WHITEPOD ECO-RESORT
Fancy an igloo? Accessible only by ski or snowshoe trek, the Whitepod Eco-Retreat offers a unique experience in the Swiss Alps. The camp, situated at 5,577 feet, consists of twelve pods designed to look like igloos. (They’re actually dome-shaped tents pitched on raised wooden platforms surrounding an Alpine chalet.) Each pod is heated by a wood-burning stove and can withstand a snowfall of 45 lbs. with winds up to 130 mph. The resort offers ice climbing, ski tours, guided and unguided snowshoe tours, back country skiing and dog sledging.