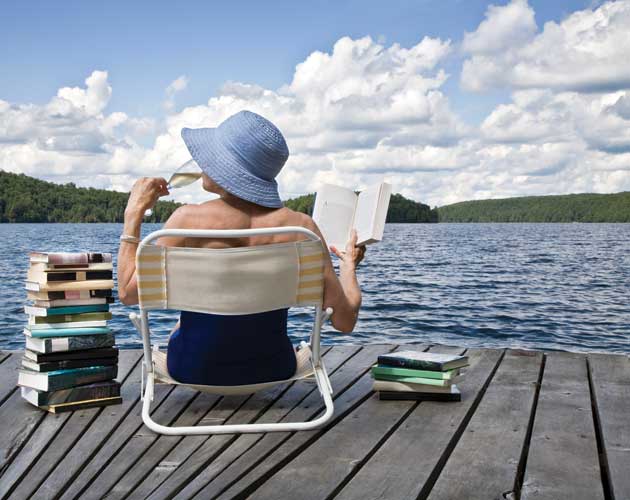 If you’d prefer to journey to distant lands from the comfort of home or cottage, here are some classic travel reads.

A Moveable Feast by Ernest Hemingway is an enchanting memoir of the pleasures, memories, experiences and observations of the expatriate life. Set in 1920s Paris, Hemingway and his wife, Hadley, lived happily on $5 a day (and they still had money for drinks at the Closerie des Lilas, skiing in the Alps, and fishing trips to Spain).

Sacred Places of a Lifetime: 500 of the World’s Most Peaceful and Powerful Destinations by National Geographic. This impressive coffee table book takes you on a journey of the world’s sacred destinations including the Mont St.-Michel Abbey in France, founded after a reported vision of the Archangel Michael; the White Horse Temple in China, site of the country’s first Buddhist temple; Machu Picchu in Peru, whose origins lie in obscurity; and Dome of the Rock in Jerusalem, considered by many to be the holiest city in the world.

Flightless: Incredible Journeys without Leaving the Ground by Lonely Planet. This eclectic collection of 26 tales explores the intricacies and delights of surface travel the world over. From walking to pedal boating, from camels to cargo ships and anything from two to four wheels, you’ll cross whole continents. (And at times feel glad you aren’t along for the ride!)

Bad Lands by Tony Wheeler is a witty first-hand account of his travels through some of the most repressive and dangerous regimes in the world: Afghanistan, Albania, Burma, Cuba, Iran, Iraq, Libya, North Korea and Saudi Arabia. Taking into account each country’s attitude to human rights, terrorism and foreign policy, he asks ‘what makes a country truly evil?’ and ‘how bad is really bad?’ Along the way, you’ll meet a colourful cast of locals and hapless tour guides.

The Great Railway Bazaar by Paul Theroux. Share in this epic journey through India and Asia. A testimony to the spontaneous joys of train travel, Theroux encounters a fascinating variety of places, people, foods, faiths and cultures.

Under the Tuscan Sun by Frances Mayes is for anyone who has ever dreamed of starting over in a wondrous, new place. As you share Mayes’ challenges in restoring an old villa in Italy, you’ll discover the simple, yet sensual pleasures of food, friends and village life. (And if you like the book, you might want to also check out the movie starring Diane Lane and directed by Audrey Wells.)

The Unbearable Lightness of Being by Milan Kundera will transport you to the former Czechoslovakia. In this best-selling novel about love, desire and the conflict between longings and logic, you’ll follow the lives of artists during the invasion of the Soviet Union and Warsaw Pact Allies. Also a highly acclaimed film starring Daniel Day-Lewis.

Life of Pi by Yann Martel. A young boy named Pascine Molitor Patel – known as Pi – from Pondicherry faces immeasurable hardships on the high seas when he is shipwrecked in the Pacific Ocean for 227 days. His only companions are an assortment of animals, including a Bengal tiger, who is at once his best friend and worst enemy. A spiritual adventure about what it means to be alive and to keep the faith.

Sheltering Sky by Paul Bowes is a dramatic and semi-autobiographical tale set in Morocco during the 20 th century. Characters Kit and Port Moresby travel to North Africa to re-ignite the passion in their marriage – only to find themselves battling the elements of nature and the impassive cruelty of the desert.

The Innocents Abroad by Mark Twain. Published in 1869, this Grand Tour of Europe and the Holy land contains clever observations on the relationship between Europeans and Americans during the 19 th century.

Seven Years in Tibet by Heinrich Harrer is the true story of his daring escape across the Himalayas to Tibet after being imprisoned in India by the British during World War II. As the eventual tutor to the Dalai Lama, the author gives an insider’s view of the Tibetan way of life. (Also check out the movie, starring Brad Pitt and David Thewlis.)

Don’t Go There! The Travel Detective’s Essential Guide to the Must-Miss Places of the World by Peter Greenberg just might be the perfect book if you’re disheartened about not going on a trip. The book lists places not to visit, including depressing destinations, crime-ridden cities, polluted beaches, cruise ships most often cited for outbreaks of intestinal viruses, and places that (literally) stink.

Do it, see it, and visit for free