Around the World with Blue Planet Odyssey 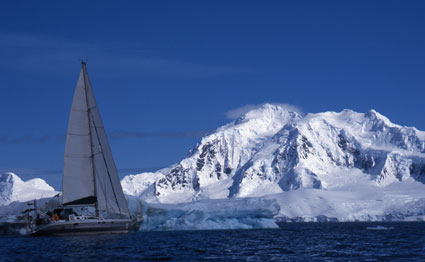 In 1519, Portuguese sailor Ferdinand Magellan set out from a Spanish port in search of an Atlantic route to the “Spice Islands” in southeast Asia. Three years later, of the 237 men who went, only 18 returned, completing the first marine circumnavigation of the globe. Magellan himself didn’t make it – he died in a battle in the Philippines.

Now, nearly five centuries later, 72-year-old sailor and author Jimmy Cornell invites would-be explorers from around the globe to join him on the Blue Planet Odyssey (BPO) – a round-the-world sailing adventure launching from various continental ports between 2014-2015, highlighting the effects of climate change and islands in danger of disappearing as a result of it.

Cornell recently spoke with Zoomer about preparing and recruiting for the Blue Planet Odyssey, sailing around the world with his family, and the funny lengths one septuagenarian went to in order to realize his dream of circling the globe.

MIKE CRISOLAGO: Tell us about why you decided to organize Blue Planet Odyssey.

JIMMY CORNELL: On a more general level, the fact that I’m very concerned about climate change. We had the Superstorm Sandy, disastrous floods, the polar ice caps (are) shrinking at an unprecedented rate and so on.

The second reason is that the start of the event in London in July 2014 coincides with the 40th anniversary of the start of my first voyage around the world. I’d like to sail to some of the endangered islands that are threatened to disappear certainly before the end of the century, if not much sooner, and to show them that the international sailing community cares for them and are concerned for their future.

MC: What are the biggest challenges you encounter on such a voyage?

JC: I’ve been around the world three times and the challenge is not so much physical as mental. If you have the skills and really are prepared to take on this challenge, by respecting Mother Nature and by having a good boat and knowing what you’re doing, it’s really something manageable. If you break it up into shorter legs of only a few hundred miles each, suddenly the world and the globe doesn’t seem that huge.

MC: How do you prepare?

JC: People start either properly equipping the boat they already have or buying a new boat – an off shore boat ­­­­– that can take you and possibly your family has to be well equipped with safety equipment and navigation equipment. Then, it’s very important for you to have the skills to run the boat, to handle the boat properly, to know how to deal with bad weather, how to deal with emergencies. Of course, you have to have the financial means because it can be quite costly to sail around the world and keep the boat in good condition.

MC: There must be an emotional component to prepare for as well.

JC: Absolutely, and that deters many people from actually going. I found young people are not too concerned about leaving families behind. The people who are really always unhappy about leaving on such a long voyage are grandmothers. I know of several occasions where the wife of a skipper on a round the world voyage decided to leave the boat and go home because she wanted to see her grandchildren. But I think if you are prepared to go on an adventure like this one, you are prepared to put up with this emotional weight.

Also, there are very good ports all around the route where you can leave the boat safely so you can fly back every few months and see your family or your family can fly out and visit.

MC: You sailed around the world for six years straight with your wife and two young kids in the 1970s. How did you manage that?

JC: We left England in 1975 and we returned in 1981. The children were five [his son] and seven [his daughter] when we left. My wife trained as a teacher so she could teach them throughout the voyage. They came back and fit into the educational system in England and both went to university. It formed them very well – it formed us as a family. I cannot stress strongly enough how important that voyage for us was, for how it shaped our family.

MC: How much have the logistics of the trip changed since your first round the world trip 40 years ago?

JC: On a technical level, things have become much better and much easier because the boats are well equipped, the navigation equipment is excellent. The challenges nature throws at you haven’t changed – when there’s bad weather you still have to cope with it. Technology will not solve it for you on a small boat in the middle of the ocean. Precisely because these technological improvements have made it so easy to go to sea, many people who don’t have the experience, or sufficient experience, are setting off and they get into trouble.

MC: What would you say to readers who’d like to take part in BPO but are worried about physical limitations due to age?

JC: First of all, age is not an excuse. I’m 72 and I’m planning to do it. We have several people who are over 70 already signed up. And I assure you that in all our around the world events I would say that certainly half – if not more – of the captains were over 60. Very often we attract professional people in their early 60s who prefer to have all the worries about formalities and such things taken out of their hands by joining round the world events like ours. Do it now because you never know what tomorrow brings.

MC: Any funny stories from your voyages?

JC: Many years ago in an Atlantic rally I (organized), we had a gentleman who joined in his late 70s. He was a rich gentleman and when he told his physician he was planning to sail across the Atlantic the physician said, “At your age, what if something happens?” The rich man said, “Oh no, that’s not a problem because you will come with me.” Shortly afterward he went skiing and had an accident so (another) physician also told him (he can’t go) so he said, “Okay, you come with me.” And then, just before they left, he had a slight heart problem, so the cardiologist came with him too. The man floated across the Atlantic with three doctors in tow, and he completed his voyage. [Laughs]

MC: How do you hope this trip changes the perceptions we have of nature and the endangered places you’re planning to visit?

JC: We have quite a comprehensive program. We have a scientific program, an educational program. So (when) someone is joining the event, we’d encourage that person to get at least one local school interested to follow his/her voyage. To have research institutions – oceanic institutions – who are going to use our event to take samples or measurements, to do scientific research with the help of our participants, and to show, indeed, the effects of climate change. And then we hope to raise awareness to the plight of the people in the threatened islands by having a film crew at the event. We hope to have virtual classrooms in these endangered places where people see exactly what is happening – the erosion, the high tides, and so on. So, there’s many, many aspects that can ride on the back of such a global event to raise awareness worldwide, as it were.

For those interested in joining the Blue Planet Odyssey, Jimmy Cornell will be speaking and recruiting at the Toronto International Boat Show on Jan. 12, 2013. For more information, visit www.torontoboatshow.com.

The BPO costs roughly $30,000 to join. For more information on the BPO, the financial commitment, the length of the voyages, and seminars and advice on preparing for the trip, visit www.blueplanetodyssey.com.