Swiss Adventures in Food and Drink 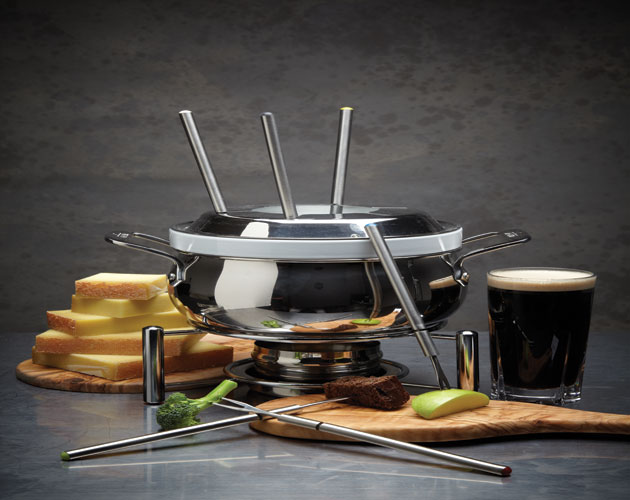 If you don’t care for cheese, you’re in the wrong country. The Swiss invented both fondue and raclette, so be prepared to dive into both. The great thing about fondue is it has booze in it – sometimes lots of it! The Swiss only dip bread into their cheese fondues, often a hearty country loaf, cut so that each piece has a bit of crust with it. Add a salad and a glass of wine, and you’ve got a terrifically simple meal. Ditto for raclette, a dish where a block of cheese is melted with an electric table-top grill (or by an open fire), then scraped directly onto your plate, smothering your potatoes. Both of these are wintertime staples.

The Kiss of Kirsch

Kirsch is a double-distilled brandy with a subtle cherry flavour mixed with a slightly bitter cherry-pit undertone (the cherries are fermented pits and all). Also referred to as Kirschwasser, it is similar to grappa in its bitterness.

At Fassbind Distillery in Oberarth, Switzerland, makers of top-notch Kirsch since 1846, Lucas Fassbind sums up this very special schnapps, which his family has been making for 165 years on the very same premises: “Cooling, warming, burning, contracting, silky, round” are some of the words that tumble out of Fassbind, the spokesperson for the brand, which features his ancestor Gottfried I. on all the labels.

Considering the record for spitting a cherry pit in this country is 26 metres, these people know their stuff. Apparently, female cherries are meant for eating, with strictly male cherries used to make brandy. Fermentation begins after the summer fruit is harvested, spanning six to eight weeks, with distillation taking over October through December. There are about five kilograms of cherries in every bottle of Kirsch.

Nineteen generations later, Fassbind continues to get it right, with a range of fruit spirits that runs the taste gamut. Look for it in stores across Europe.

NEXT PAGE: TRY A LITTLE FONDUE AT HOME WITH THIS DELICIOUS RECIPE

Try a little fondue at home. See our recipe from the kitchen of Kevin Prendergast, executive chef, Tundra Restaurant, Hilton Hotel Toronto, as seen in the November 2013 issue of ZOOMER Magazine.

In a small bowl, coat cheese with cornstarch and set aside. In a fondue pot over medium heat, combine wine, lemon juice and garlic; bring to a gentle simmer. Remove garlic and gradually stir cheese into the simmering liquid. Melting the cheese gradually encourages a smooth fondue. Once smooth, stir in brandy, mustard and nutmeg. Adjust seasoning to taste.