Bangkok for a Day 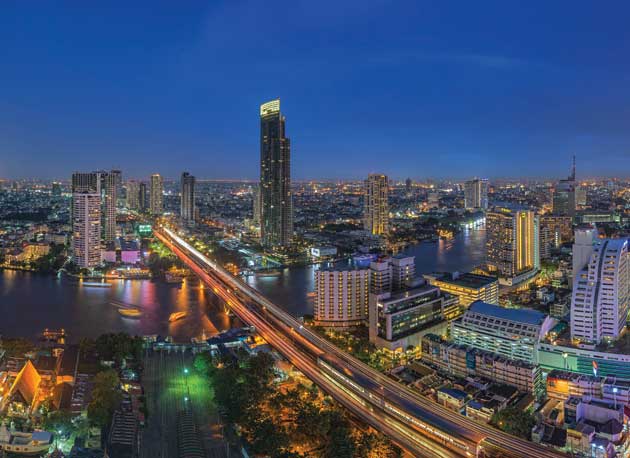 Thailand’s capital has elbowed London aside as a magnet for international visitors. With 15.98 million heads on pillows, it’s topped MasterCard’s 132-city Global Destination Cities Index for 2013. Travel + Leisure readers have also ranked Bangkok tops on that magazine’s World’s Best City list for the fourth year in a row, and we agree. After all, it is your first stop connection en route to Thai vacation spots Phuket, Chiang Mai and Koh Samui, so why not pause after the long flight?

Here, how to spend an easy 24 hours in this exotic, bustling metropolis.

1 Go directly to Bangkok’s Grand Palace Exquisite seems too puny a word for this regal complex. Lavish applications of gold and mother-of-pearl glimmer on rooftops, in cool temples and on mythical statues throughout its almost 220,000 square metres. At the Wat Phra Kaew within the compound, pay respects to the Emerald Buddha, the country’s most revered image, then marvel at the temple’s six-metre-high, 800-metre-long murals adapted from the Ramayana, an ancient Hindu epic. In the nearby Wat Pho, a quest for good luck makes music as you file past the 46-metre-long reclining Buddha (Thailand’s largest). Coins dropped by fortune-seekers into the 108 bronze bowls in the corridor behind the figure create the heavenly sound. www.tourismthailand.org/Where-to-Go/Bangkok

2 Stay – and eat too. You won’t want to leave the serene and stylish Metropolitan Bangkok Hotel once you’ve dined there at Nahm. Chef David Thompson gives traditional Thai food a sophisticated update – nervy, given that he’s Australian-born. His talent earned a Michelin star for Thai cooking at his now-closed Nahm London base, and he’s out to prove that local Thais will love his grub, too. www.comohotels.com/metropolitanbangkok

3 Wind up by winding down They’ll bend you out of shape, but a rigorous two-hour Thai massage at RarinJinda Wellness Spa in the Grande Centre Point Hotel in Bangkok will leave you feeling limber and refreshed. Following the sens – lines of energy flowing through the body – a determined therapist sequentially applies firm and rhythmic pressure to muscle tissue using hands, elbows or feet and also leverages you into yoga-like postures. This challenging but deeply relaxing process relieves stiffness and pain, and improves flexibility. Practitioners also believe it balances energy flow. www.rarinjinda.com.