Sending Messages Across The Universe in Taiwan 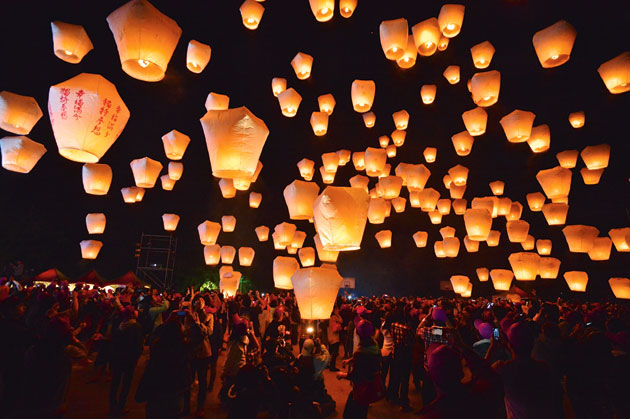 Fire in the sky. Sending dreams and prayers across the universe in Taiwan.

The light in the sky is fading. The backdrop—green hills and village homes dotting them—is basking in an early evening glow. But there is another glow, another light that is beginning to brighten things up. There are signals on the horizon. The sky is still blue, but it begins to fill with floating spots of yellow and orange and red.

In the Pingxi district of New Taipei City, the Pingxi Sky Lantern Festival had happened the night before. In the tiny town of Nanshan, what seems like the whole country of Taiwan gathers to release the beacons to the sky. In many countries in Asia, a lantern festival celebrates the end of the New Year holidays and the beginning of spring. In the darkest of winter months, light is the luxury, a joyful hint of the warmth still to come. But this is one of the few places on earth where we’re not too late: people come every day to this little town dissected by a railroad that still runs through it. We watch as pilgrims from all over the world put it out to the universe.

What I mean by “putting it out there” is not as new age-y as it might sound. Historically, the lanterns were a military strategy, used to send messages and to act as warning beacons to wartime allies. But in the 19th century, these baby sisters of the hot air balloon arrived in Taiwan from China, and were given a new meaning, a new purpose.

In the way that many of us believe that heaven is above us, the Taiwanese also believe the sky is a place from where their ancestors watch over them. The lanterns are message boards, so to speak, with handwritten prayers and wishes and dreams.

There are four of us, and we are given one lantern to work with. It has four panels, one for each of us, and is about three feet in height. It is paper, light as tissue, on a wire frame, and you can choose one colour, such as red (prosperity), or look for a multi-coloured lantern. The shops all have charts to show you which colour means which, so if you’re looking for a good marriage, for example, make sure you write your wishes on an orange panel.

We choose a multi-hued lantern—red (health), yellow (wealth), blue (career)—and my panel is pink, the colour of happiness. I don’t need to stick to the colour theme, the shopkeeper tells me. Just write my hopes and wishes. “Healthy children?” she asks.

“Tranquility for you and longevity for your parents?” she adds. She reads me very well. In that moment, the idea of manifesting your desires becomes whole; it’s not just the power of thought, it’s the power of communicating it to the universe. It is not something anyone takes lightly. There are hundreds of us, calligraphy brush in hand, holding it as it drips black ink on the pavement, thinking hard before putting it in writing, like we did before blowing out the candles on our birthday cake because we didn’t want to waste our wish.

It’s almost dark now, but the sky is on fire with lanterns already released. It’s our turn, the four of us each taking a corner. The fuel—play paper money—is lighted inside the lantern, the obligatory photo is snapped and together we raise it, already glowing, above our heads. It bobs and spins and, like so many others, it takes off so slowly it’s as if it’s trying to find purchase on the edge of the breeze.

And it does, they all do—on this evening, the wind carries them high, toward the hills, away from the sea. Hundreds of specks of gold against a blue-black yonder. I can see my big, bold scribble even now. After our ancestors in the sky have read the messages and committed them to memory—and the paper fuel has burned itself to ash—the lanterns can be found somewhere miles away at touchdown. The earth takes back what is hers, grounding our thoughts, for others to read and wonder. Who wrote this? And why are their prayers so much like my own. My prayer? Happiness. And I am, in that moment, serene as the lantern itself, free for a moment, to dream.

Taiwan is famous for its lantern festivals, and the Pingxi Sky Lantern Festival is only one of them. The major event, the Lantern Festival sponsored by the national government, is a cavalcade of light—hundreds of sculptures made up of LEDs morphed into everything from Hello Kitty to the Eiffel Tower to this year’s Chinese zodiac sign, the rooster. It takes place in a different city each year, and competition for hosting the event is fierce. Even Madam President shows up. Yes, she with the cajones to call Mr. Trump right out of the gate.

In southern Taiwan, extreme adventurers may find the Beehive Fireworks Festival in Yanshui revs the adrenaline. It is the third largest folk festival in the world, but you won’t find Dylan or Baez singing here. What you will find is a religious festival that evolved from the late 1800s, where the faithful started setting off firecrackers en masse to ward off the plague. Now, it’s motorcycle helmets, fire-retardant safety gear and a good pair of shoes, while the sky goes mad with the beehive firecrackers.

Legend says that if you get hit (and, yes, it stings like a bee), the evil spirits have been ejected. Lucky us. eng.taiwan.net.tw

A version of this article appeared in the May 2017 issue with the headline, “Hope Floats,” p. 80.