Travelling With A Purpose: A Trip to Italy 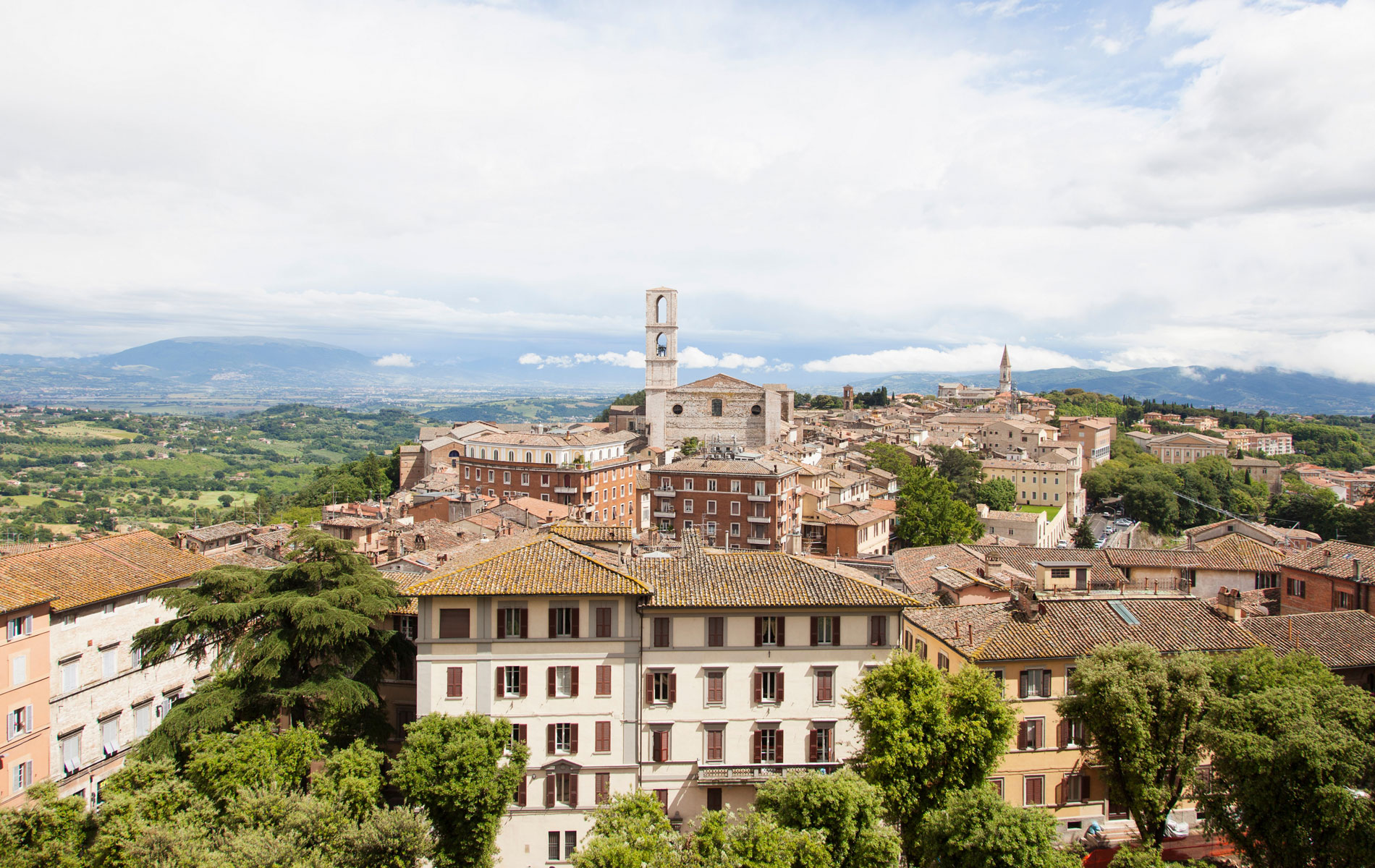 Travelling with a purpose is the new travel movement. Here, we take you on a trip to Italy where travellers and tour companies are working to preserve cultural treasures for the future.

Her feet move with precision. Her black ankle boots, four-inch heels, laced up like a corset, hint at punk, but do not impede her progress – pumping the pedals like an organist at mass. Her almond-shaped eyes flash intensely. Her blood-red lips give way to a smile even more intense. Her cropped hair severe, yet reveals a honed bone structure. But it’s her hands and fingers that contradict this hard-core vision. They fly, gently yet exactly, over, under, in and about, what appears to be hundreds of threads, multi-hued, strung tight across ancient looms that her mother, and her mother, and her mother before her, used to weave their textile magic.

We’re in Perugia, in the presence of Marta, inside the Church of San Francesco delle Donne, in the Umbrian region of Italy. The church is Marta’s workshop, the Laboratorio Giuditta Brozzetti. The antique wooden loom that she is working has a time-honoured, well-loved patina, worn in the places where her great-grandmother, the founder Giuditta Brozzetti, layed her own deft hands on it. No doubt, Marta can still feel her warmth and energy through the wood. It appears to fuel her, fire her passion as she pushes and pulls and slides the wood slats and pulleys and pedals.

The cloth she is weaving is inspired. Not just by her ancestry, but by her country’s history. This is the birthplace of the Perugia tablecloth and Marta’s studio is one of the few remaining traditional frame hand weaving workshops in Italy. Medieval and renaissance patterns come to life, based on records from the matriarchs in Marta’s family, as well as through art. It’s said that the table in Leonardo Da Vinci’s The Last Supper was adorned with a Perugia cloth, informed by Da Vinci’s Italian roots. The patterns are evident in many paintings from the periods, and Marta has many printouts of examples taped to the sides of the looms for pattern inspiration.

They say that necessity is the mother of invention. Giuditta was inspired for different reasons. It was the First World War and, with the men at battle, women took up the employment mantle. Giuditta became Perugia’s elementary school director, travelling the Umbrian countryside to check in on the rural schools. Along the way, she would hear sounds coming from the homes she passed. Inside, she discovered the looms – and the artisans and, with it, that the art of weaving traditional textiles was dying out. It became her mission to sustain the craft, and to enliven the patterns indigenous to Umbria. Four generations later, mission accomplished.

Click through to find out more on the United Nations Travel World Organization’s (UNWTO) initiative for 2017, the international year of sustainable tourism for development, and my interview with TreadRight Foundation’s sustainability ambassador, Céline Cousteau. www.treadright.org; www.trafalgar.com/can

The author with Céline Cousteau, in Italy, while on tour with Trafalgar

When the United Nations Travel World Organization (UNWTO) deemed 2017 the international year of sustainable tourism for development, I thought, “OK, more carbon footprint? Aren’t we all well aware of how important preserving the Earth’s environment for future generations is?” But, then, I thought, wait. What exactly is the definition of sustainable travel?

I could recite all the reasons travel is good – for all of us. I reported it myself in the pages of this magazine earlier this year: The collective effort to sustain natural heritage and cultural values as a way to better understanding and acceptance of – and ultimately, celebrate – our diversity. Many of you might think, “I’m Canadian, I already think this way.” So how do we spread the love? I had to go deeper; travel with like-minded people who are at the forefront of the initiative. I’m with TreadRight Foundation‘s sustainability ambassador is Céline Cousteau, granddaughter of the ocean explorer Jacques Cousteau, and filmmaker, humanitarian and explorer in her own right; and she’s working with the foundation and its parent company, The Travel Corporation, to extend its philanthropic touch, through guided holidays such as the one we are on, created by one of TTC’s brands, Trafalgar. To the environment, and the artist. So this is where Marta comes in.

I’m starting to get it now. It’s more of a “whole earth” thing. “I like that whole earth thinking,” replies Céline Cousteau, when I suggest it to her, after spending the afternoon at Marta’s workshop. I confess my fan-girl excitement in meeting Cousteau, who is also the founder of the non-profit The Céline Cousteau Film Fellowship. I am a fan of the 45-year-old’s documentaries – and of her grandfather’s, well, everything to do with the sea (I recall many a Sunday nights round the TV with my family as a wee one watching The Undersea World). I try to explain my meaning. “You’ve taken your family’s legacy with the ocean and, the way I see it, you’ve brought it onto the land,” I suggest. I relay to her my conundrum, to put a non-carbon fingerprint on what sustainable travel really means.

“It’s about making better decisions and better choices at all levels, the behaviour that we have toward the places we visit,” Cousteau says, without hesitation. “I think at the root of it being able to go to these different places can have a profound impact on our own perspective of ourselves in the context of the world, our relationship to other people, our relationship to nature – which is why, if you make decisions and make choices in terms of companies that are more environmentally minded or that are supporting local cultural or artisanal initiatives, companies that are looking at their carbon footprint as part of a bigger idea of what sustainable travel means, those are choices that define who you are as well.”

Next: More from Céline Cousteau on travelling with a purpose.

Similar to Cousteau’s grandfather, I think, introducing us to these incredible species under the water, this mystery, this mysterious place, in a way, uncovering these artisanal mysteries as well. Like Marta. She is completely unique, a rare species of woman, I suggest. “And in artisanry, yes, it is mostly women,” says Cousteau. “I didn’t set out for it [being mostly women] as important. But, the fact that many artisans around the world, regardless of tribe or culture, or geographical location are women isn’t a surprise.”

Empowering women, says Cousteau, through non-profit projects and global movements, is about economic wellbeing of the entire family and travel is a way of doing that. “It has a tremendous economic potential and we need to harness that potential for supporting people. Going back to the mission of trade in terms of making sure that the places and people that we visit stay vibrant. Maybe because I don’t seek women-specific things, it happens naturally anyway and being a female traveller, I want to support women. I think it’s important.

Ah, a female traveller. I veer the conversation a bit here: what about the positive rise of the female solo traveller, at every age?

“I encourage women to travel, but I would still be hyper-vigilant being a woman travelling on my own,” she says. This coming from a woman who has been welcomed in to the homes of some of the most remote tribes on earth. “I usually choose to – I mean I rarely travel simply as a tourist. I usually travel for a purpose or a cause.”

A purpose. Yes, I agree, that’s what people are looking at now, especially people of a certain age. We are looking at what it’s all about. We want to travel more with a purpose. When Cousteau and I first met, a year before in Toronto, she was telling me about another project in Peru. Weavers, like Marta, and women, too. “And you realize that following the “thread” of Marta’s history throughout time, you’re actually connecting to the history of Italy.”

Next: More from Céline Cousteau on travelling with a purpose.

An Italy that goes beyond pizza and pasta, piazzas and pontiffs. A much more personal way of seeing the country, with deeper meaning, with a depth of visiting just one place, but that connects us to everything. “It gives people the sense of seeing something that is behind the scenes,” she adds. “Tangible.” In this way of guided travel, you’re not standing around with 3,000 other people at tourist sites, because, as Cousteau puts it, you can do that on your own. But how can we do even more?

“I would love for more of the travellers to get involved in things like what Marta does,” she says, “but be able to actually take the initiative to perhaps spend more time, maybe learn how to weave… to just bring more people to more purpose, to more meaning in their travels, not just seeing the buildings from the outside and saying oh, well, that’s awesome but actually getting their hands dirty.”

Like Marta’s hands. Cultural heritage, artisans, the living history of those people that are actually a piece of living history. Marta is a piece, surrounded with those inanimate objects that she animates. The precision and focus is remarkable to witness, just how alive she is while doing it. Her passion is contagious. And people crave passion. And passion, Cousteau believes, is what her work with TreadRight is infusing into it.

“That it’s called sustainable is one label,” she adds. “But meaning, that’s something that I feel as human beings we’re always seeking and sustainability has meaning. So, if we need to go beyond this green label, we need to infuse it with those new definitions: it’s interconnecting humans to other cultures and to other human beings and interconnecting humans to nature.”

Cousteau sums it up. “If we have the opportunity of exploring new cultures, new places, new ecosystems, new environments, new ways of thinking, I think that changes who we are.” And Marta? She doesn’t have a daughter of her own to pass down the art but, she says, while taking a break from the looms, “I have a niece.” Her flash of a smile tells me she has every intention of sparking the passion of the next generation.

The not-for-profit TreadRight, as part of The Travel Corporation (TTC), supports the UNWTO initiative by aiding cultural heritage treasures like Marta through awareness and grants from our tourism dollars. (The guided itinerary we’re experiencing was created by TTC’s Trafalgar.) The Travel Corporation, is an official Diamond supporter by sponsoring the activities prepared by the UNWTO for 2017, through its not-for-profit foundation, TreadRight. The foundation, launched in 2008, works on projects such as supporting local communities through enabling livelihoods, like those of artisans – in Canada, TreadRight supports the Manitobah Mukluks Storyboot School and the art of mukluk-making, for example – protect children’s welfare by working with Canadians Craig and Marc Kielburger, Free the Children and the Me to We movement, and preserving wildlife, such as the Wilderness Foundation for the Rhino in Africa. And I really like Rhinos – almost as much as I like Italy.

For more on giving back when you go: www.treadright.org; www.trafalgar.com/can.